“The following trailer only spoils season 1 of Stranger Things. The bad men will get us if we spoil season 2 before it’s on Blu-ray.”

After Honest Trailers’ triumphant return with Spider-Man: Homecoming, it seems fitting that ScreenJunkies would turn their attention to TV’s biggest phenomenon. Season 2 of Stranger Things still has its claws in the viewing audience and the Internet zeitgeist, and it feels like a perfect time to revisit how it all began.

I have to say that this Honest Trailer is one of my favorites; it perfectly encapsulates my mixed emotions regarding season 1 of Stranger Things. Let me guide you through some of the trailer’s best moments and provide pictorials in case you can’t watch the video right now.

“From a directing duo that’s like Tarantino, if he referenced movies you’ve actually seen …”

And the truthiest truth about the show:

“No, I don’t want to skip intro, this song is awesome!”

It’s hard to argue that a great deal of Stranger Things‘ popularity and widespread appeal came from its excellent (but freakin’ constant) use of ’80s nostalgia, and Honest Trailers nails just the reason why:

“You love the ’80s. You love Spielberg. You love most of Stephen King. Now the world is terrible. So escape to a slick bingeable series you’d watch at double speed if it meant you could get it into your brain sooner.

Then they help summarize the season’s biggest plot points:

“Will may be missing, but there’s plenty of other strange things to go around. Like … Mike’s sister, trapped in a love triangle between two haircuts …

… Will’s mom, who copes with her son’s loss by getting really into arts and crafts …

… Hopper, the cop on a one-man quest to cold-cock every guard in town …

… and fan favorite Barb, the most talked-about character with the least amount of screentime since Boba Fett.

Look I get it, she’s awkward and she didn’t deserve to die, but what about the dude at the beginning who gets shot just for helping a lost child? Where the hashtag #justiceforbenny, huh?”

One of the highlights of Honest Trailers is always their amusing spin on end-credits, and this is the most extended and detailed that I’ve seen so far. It’s also quite a perfect (and yet relatively spoiler-free) summation of the entire season, in case you’re still on the fence about starting the show or are trying to convince a holdout friend to join you. How will they be able to resist this? 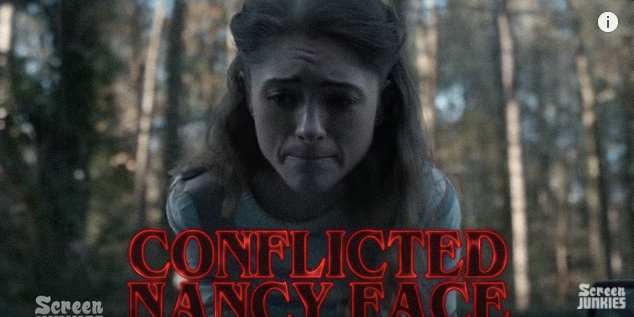 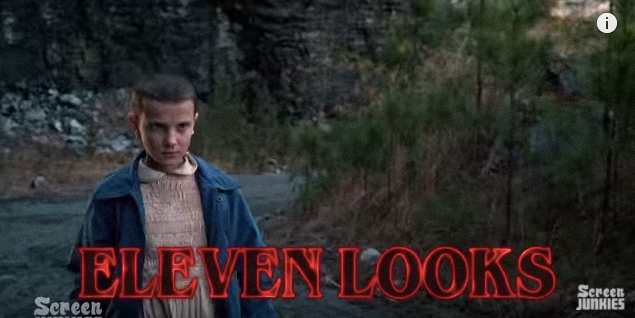 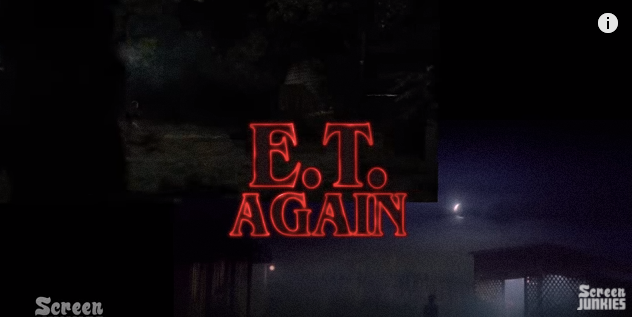 “You know what’s gonna suck? When people get nostalgic for 2017 and show kids dabbing on a hoverboard like it wasn’t the worst time ever.”

I love you, Honest Trailers. This is truly the most incisive take on Stranger Things that I’ve seen yet.

I hope the bad men will let them get around trailer’ing season 2 before that Blu-Ray. I’m actually a little surprised Netflix hasn’t gone full-blown nostalgia and announced a promotional release on VHS. They’d sell a lot of tapes.