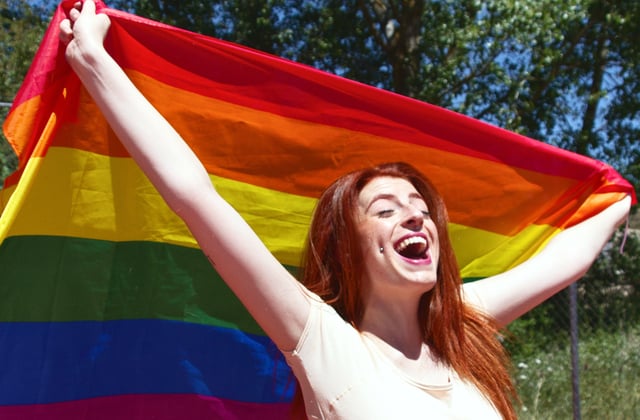 This past weekend, Gilbert Baker, the creator of the iconic gay pride rainbow flag, passed away. That contribution to society is no small one, as the rainbow has become a ubiquitous symbol of LGBTQ pride since its creation almost 40 years ago. Which is why this homophobic radio host, who seems like he’d just be a blast at parties, is in such a tizzy. Cause, see, his god created that rainbow, and the gay community is just a bunch of thieves, stealing all of God’s stuff.

Worst example of cultural appropriation ever: LGBTs stole the rainbow from God. It’s his. He invented it. Gen. 9:11-17. Give it back.

Funny how terms like “safe space” and “cultural appropriation” are so constantly mocked by these types of people, right up until they serve their narrow-minded purposes.

Nonetheless, this guy wants god’s rainbow’s back, and Twitter was more than happy to comply.

You caught me @BryanJFischer pic.twitter.com/R5cEYU69lz

On behalf of the late Gilbert Baker, let’s give @BryanJFischer back some of the stolen rainbows he so desperately wants returned. pic.twitter.com/2FxI2gttyt

Others were quick to point out that the rainbow isn’t the only thing that’s been “stolen” from god.

omg when will the horror stop

.@BryanJFischer Lesbians also stole Birkenstocks from Jesus, and we’re not giving those back either.

And, uh, while we’re on the subject, let’s look at who’s “appropriating” what here.

Do we think this guy hates Reading Rainbow? Lisa Frank? Are all celestial entities on his no-appropriation list? Like Sunny D? Did Harry Potter’s scar appropriate lightning? How about Apple products, what with that whole original sin thing? Please, all-knowing Twitter bigot, tell us what you’d like back next. I’m sure the internet will have plenty of GIFs ready for you.