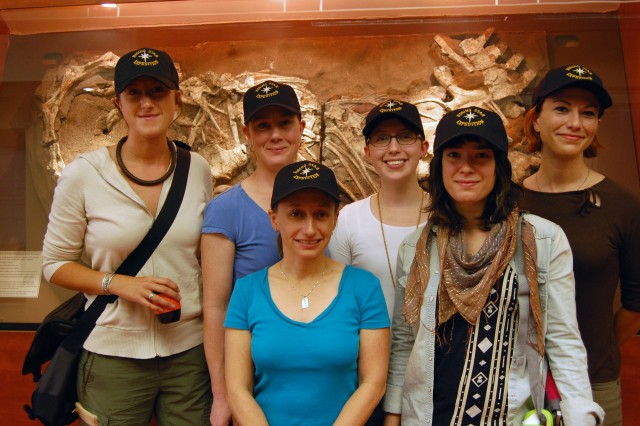 The exploration of the Rising Star cave in South Africa led to the discovery of skeletons belonging to a new entrant in humanity’s ancestry named Homo naledi, and this task required spelunkers of unusual size in order to explore its very narrow passageways.

The size requirement attached to the job led to the selection of an all-female team of scientists, each with both the necessary caving experience and the small stature required: Hannah Morris, Marina Elliott, Becca Peixotto, Alia Gurtov, Lindsay Eaves and Elen Feuerriegel.

National Geographic funded the expedition, but strangely, these women received no pay for their efforts.

UPDATED on 9/24/2015 at 3:22 PM: Feuerriegel recently tweeted to emphasize that the trip paid for her and her colleagues’ travel, food, and lodgings. The Twitter thread that follows includes perspectives from other academics with their varied thoughts on the lack of a further stipend for researchers, which while not unusual, may be considered controversial by some.

Here’s what Feuerriegel had to say about the experience:

Some days you couldn’t pry us out, really, with a crowbar. It was absolutely one of the most exciting experiences of my life. I don’t really have words to describe how thrilling it is to have been involved in it. It feels like the culmination of so much collective effort.

You could feel the press of rock on either side but, aside from that, it was actually all right getting in with a little bit of wiggling. It’s a bit crowded, there’s not much room, so we did have to coordinate these yoga poses, the three of us who were down there at any given time to work around each other.

We often had to trade up positions because someone’s legs would get tired and go numb and they’d have to go and try move delicately over to the next little rocky outcrop in order to get across the remains without crushing anything. There would be a couple standing on the one rock on tiptoes and we’d all have to spider-walk out of there.

Apparently one of the two passageways was ten inches high, and the other was only eight inches wide. Yeesh!

(via The Guardian, image via Wits University)