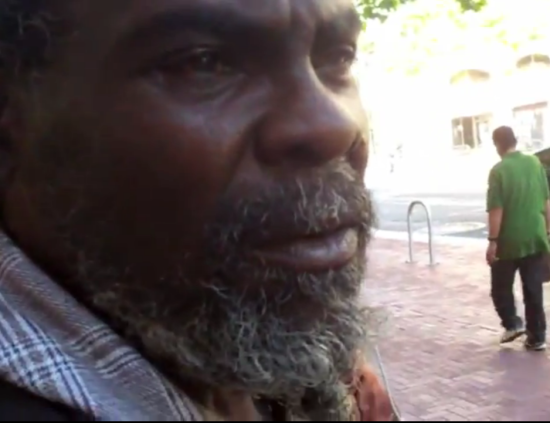 Ever wonder what the homeless life is really like? Homeless Mo has some unique insight. For one — as you might have guessed from the moniker — Mo is homeless, but unlike most of the countless thousands who live on our nation’s streets, Mo has a flip cam and he’s bringing his life to the web in short, fascinating, and sobering bursts of video.

Henry Moses Thirkfield, who goes by the nickname Mo, has been living on the streets of San Francisco for around four years, and thanks to his friend Ryan Hupfer, he’s begun to document his day-to-day experiences. Mo and Hupfer met a while back and wound up becoming friends. Hupfer explained the story to Mashable this way:

“We [met when we] ran into each other in the San Francisco Caltrain station when I was coming back home from work one day. He asked for money and cigarettes, but I was getting ready to grab a Subway sandwich, so I offered him something to eat instead.”

Hupfer has always had an interest in giving his friends cameras and encouraging them to tell their stories, and as he struck up a friendship with Mo, he saw a great opportunity to give Mo and those like him a voice through the Internet. As Mo’s online proxy, Hupfer has started uploading Mo’s video snippets to YouTube under the name HomelessMo, and has set up a Facebook page for Mo where he posts the videos as well as some of Mo’s comments on his experiences. In addition, Hupfer has also organized a WePay campaign for anyone who’d like to throw Mo a few bucks to help him through the day. He’s even created a Google Doc, in the interest of transparency, that donors can access to see what their donations actually end up paying for.

For the moment, Mo doesn’t have any sort of reliable access to the Internet, so Hupfer posts everything in his stead, but the plan is to get Mo posting directly somehow at some point. “I try my best to tell his story, and if anyone emails, I say that I’m posting on his behalf,” Hupfer says. “One of these days I’ll get him on [the Internet], but that’s going to take some time.”

In the meantime, Hupfer’s dissemination of Mo’s videos and comments feels very authentic, and the content itself is enthralling, helped in part by Mo’s cheerful demeanor. Ultimately, Mo hopes to get off parole and off the streets, get a job, and try to give back by supporting the kind of programs that help him get by. He’s still got a long way to go, but he’s already making some real progress in shedding some light on what life is like for the homeless.

“[No] matter who the homeless person is, they’re all human beings, not just some animals that should be ignored and they should never be treated that way,” Mo told Mashable. “Get to know a homeless person’s story and you’ll start to realize that they’re not that different from anyone else.”