Use Of Homeless as 4G Hotspots at SXSW Stirring Up Controversy 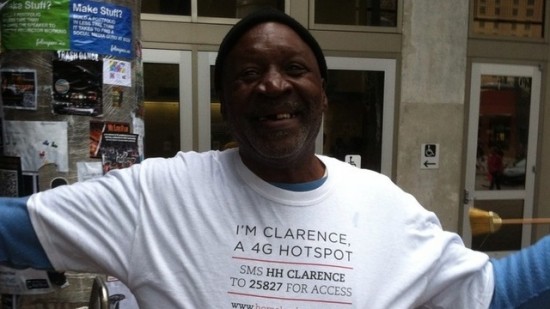 In an effort to increase the cellular data coverage at SXSW, marketing group Bartle Bogle Hegarty (BBH) has devised a rather unique solution that’s caused some heated discussion all over the Internet; they’re using homeless people as 4G hotspots. 15 homeless people are participating in the program, each wearing a shirt that bears his or her name and announces that he or she is a wireless hotspot. If you’re a SXSW attendee and want access, all you have to do is make a donation of your choosing to the homeless hotspot you wish to “use” and you’ll receive unlimited access, suggested donation $2 per 15 minutes. When all is said and done, each “Hotspot Manager,” as they are called, gets to keep all the donations made in order to gain access to his particular hotspot. Unsurprisingly, there have been some negative reactions.

“It is a neat idea on a practical level, but also a little dystopian,” said New York Times’ David Gallagher, a sentiment which many have been inclined to agree with. While having roaming hotspots may be very useful for SXSW attendees who want better access to network connectivity considering that Wi-Fi is lacking, the concept of taking the homeless and “turning them into” infrastructure has some implications that don’t go over well with everyone. “The shirt doesn’t say, ‘I have a 4G hotspot.’ It says, ‘I am a 4G hotspot,'” Jon Mitchell of Read Write Web points out.

BBH and the Homelessness advocate group Front Steps — which was involved in organizing the project — have both stood behind the idea in the face of unfolding criticism. BBH argues that the discussion of this self-described experiment is a positive affect in and of itself. Welcoming “educated critiques” in a post on its blog, BBH states that the project’s intention was to get people to help “optimize and validate this platform,” so feedback from anyone and everyone seems to have been part of the plan. Validation from whom though, is the real question.

Front Steps, based in Austin and responsible for finding the Hotspot Managers, all of whom were selected after a fairly detailed application process, says that the project fits with the organization’s goals of  “empowerment, education, and encouragement of the client to earn an income while saving the majority of those earnings with a goal of moving to safe and stable housing.”

The concept isn’t unprecedented. The whole project is openly acknowledged to be an attempt to modernize the model of street newspapers, the slowly dying phenomenon of newspapers distrubuted, and partially produced, by the homeless. Street newspapers, however, are suffering the same declines as most print publications and as such, BBH was looking to try out a modernized version. Now that isn’t to say that Homeless Hotspots is a perfect analogue for street newspapers, and one of the criticisms that BBH has openly acknowledged and agreed with is that the Homeless Hotspots project doesn’t provide any opportunity for creativity, or skill aquisition, like street newspapers do. It just involves strapping something to homeless people who then go out and proceed to be homeless.

And that’s the issue that seems to really complicate the Homeless Hotspot program, the fact that it seems to be specifically tailored to homeless people; it’s not a model one could expect to ever be attempted by the non-homeless. The fact that these Hotspot Managers are not actually being paid per se, but are asking for donations, just as they would if they weren’t hauling around 4G hotspots is what seems to separate this from what one might normal consider a “job.” These folks are still going around being homeless and asking for money, the only difference is that now they have “something of value” to offer in exchange. There’s also the matter of seperating the hotspot’s carrier from the hotspot itself. The term “Hotspot Manager” seems pretty clearly intended to work around the tendency to refer to the homeless people themselves as the hotspots. I’m sure you can see how this whole thing can be touchy.

All in all, the project as stirred up a lot of talk, and while data about exactly how much these hotspot managers actually managed to raise won’t be made public until after the project is over, it should be interesting to see. Whether it’s right, wrong, offensive, or no big deal, it certainly has drawn a lot of attention to the homeless and homelessness as a problem in general. Awareness is only the first step to dealing with a problem, but one step is arguably better than none.

(via Buzzfeed, image via A Hardly Normal View)