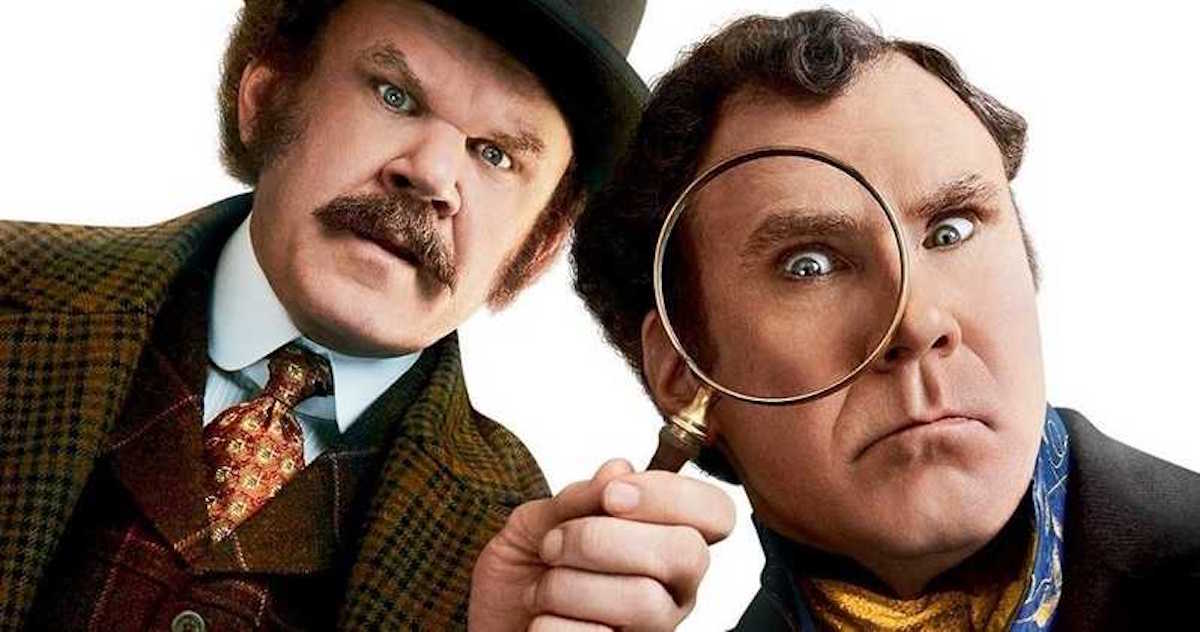 An attempted comedic spin on Sherlock Holmes, starring Will Ferrell and John C. Reilly as manbaby versions of Holmes and Watson, is apparently so terrible it has earned a jaw-dropping 0% on Rotten Tomatoes.

I feel as though we reached peak “rebooted” Sherlock Holmes a few years ago. The BBC show Sherlock, a modern-set version of Arthur Conan Doyle’s famed detective, followed by the CBS show Elementary, and the Robert Downey Jr.-starring Sherlock Holmes as more of an action hero, reinvigorated the public’s interest. Love for Holmes has never faded entirely, but with these incarnations he burst back on the scene and into the zeitgeist, earning new generations of fans.

Like any pop culture trope that we get too much of—think vampires and wizards and pirates—Sherlock’s adventures started to feel played out, oversaturated. He’d already been masterfully depicted onscreen in films for decades; books about him and expanding on his tales are endless; the hit Sherlock buckled under the weight of its own popularity, becoming a distraught fandom space and struggling through later seasons. In short, I cannot imagine there was a clamorous demand for a raunchy slapstick comedic take on Holmes and Watson, but here we are.

By every account that I have read, Holmes & Watson is a terrible movie. The film reunites Ferrell (Holmes) and O’Reilly (Watson), used to bumbling around with each other to much funnier ends in Step Brothers and Talladega Nights. Holmes & Watson wasn’t screened for critics, which accounts for part of its horrifyingly low Rotten Tomatoes score, but those who managed to see it did not add any freshness to that Tomato-meter. Here are some of my favorite quotes from current reviews.

Writing that Ferrell and O’Reilly “hit career lows in the abysmally unfunny Holmes & Watson,” Ignatiy Vishnevetsky at the AV Club declares that what he saw was “89 minutes of inertia and pure, undiluted flopsweat, with a couple of uncharacteristically unfunny and painfully awkward lead performance.” Further, “Struggling with objectively awful English accents, the two actors spend their time on screen dragging out terrible jokes, as though trapped in the improv-exercise equivalent of eternal damnation. Though it’s mostly the audience that suffers.” In short: “One might call it a failure on almost every level—that is, if the movie ever gave the impression that it was trying to succeed.”

Over at Rolling Stone, critic David Fear gave the movie half of one star and made his headline “No, Sh-t Sherlock.” Fear writes that the parody movie “is so painfully unfunny we’re not sure it can legally be called a comedy,” and likens it to “a rotting, shambling corpse.” He seems to sum up his experience with an anecdote from the film: “At one point in Holmes & Watson, a character goes undercover as a manure salesman and begins screaming, ‘Horseshit for sale! Will anyone buy my horse’s shit?’ It’s the one genuinely honest, self-aware moment in the movie.”

And at The Wrap, Alonso Duralde calls Holmes & Watson “stultifying” and “a thoroughly tedious and never-amusing spoof.” All of these critics seem to be so exactly on the same page that one imagines this movie really is painfully bad as they describe; usually, there are a few naysayers able to find a silver lining. The only nice things Duralde can say:

The results are singularly awful, but there are three people who can emerge unscathed from this fiasco: Rebecca Hall, who elicits mild chuckles (the closest this film gets to laughter) as an American doctor who thinks 19th century medicine is as modern as science gets; costume designer Beatrix Aruna Pasztor (“The Brothers Bloom”), who brings color and wit to her period creations; and the marketing person at Sony who didn’t pre-screen the film for critics, thus quashing advance word and ensuring it would be seen too late to make the deadline for most Worst of the Year lists.

Other critics also manage faint praise for the supporting cast, which includes appearances from Hall, Kelly Macdonald, Steve Coogan, Ralph Fiennes as Professor Moriarty, and Hugh Laurie, who knows a thing about playing a Sherlockian type, as Mycroft Holmes.

How did such fine actors end up in such a mess? It’s a mystery unworthy of our great detective, since it likely involves a giant paycheck and maybe enough Sherlock-approved intoxicants to forget that their participation was anything more than a passing nightmare.

There was a time when we could have had it all, but instead we got Holmes & Watson.

Hey remember when the Doyle estate threatened Robert Downey Jr’s Holmes sequel because they heard they might have Holmes and Watson kiss and they needed to protect Sherlock Holmes’ integrity? Anyway, this is a satisfying resolution. pic.twitter.com/FDPylc0seq

As a lifelong fan of Sherlock Holmes and his faithful sidekick, it pains me to see them come to this. Maybe we should do as Conan Doyle attempted, and let Sherlock fade away for a time into the Reichenbach mists. His resurrection is now inevitable—every era, I expect, will have its Sherlocks—but the resounding message of Holmes & Watson seems to be that this particular schtick has nowhere left to go right now.