Meta-Meta-Hitler: Now He’s Upset About All Those Hitler Videos 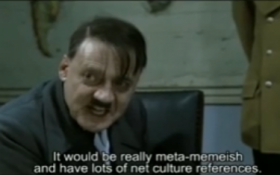 Oh, Internet, I love you. First you turn a dramatic scene from a turn of history depicting Adolf Hitler learning, essentially, that he’s just lost his war into a series of hilarious parodies depicting his displeasure with the X-Box, the iPad, Leno’s return to late night, and his plans for Burning Man, amongst others — then you turn that on its head by depicting Hitler’s displeasure with all the parody videos about him on the Internet. Meta to the meta, with a generous side of awesome.

The video was done by Chris Hanel of RiffRaffTheater, who gave “thanks to the 197 other Hitler parody videos for the inspiration.” The Internet giveth, and it giveth again. “Next you’ll want to make a Coke and Mentos video, won’t you?” Heh. If you’re an Inter-nerd, you’ll like this.

Related:
Know Your Meme: Hitler in Downfall [Rocketboom]
The Director of Downfall Speaks Out on All Those Angry YouTube Hitlers [Vulture]