Hillary Clinton Created Her Own Text From Hillary | The Mary Sue

Secretary of State Hillary Clinton Loves Texts From Hillary, So She Made One 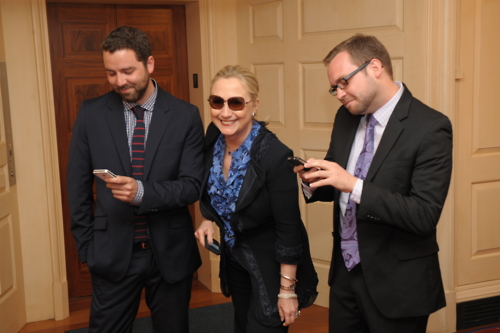 Whoa, whoa, WHOA. You guys, you know that time we told you about the new Tumblr taking the internets by storm, Texts From Hillary? You’re never going to believe who found out about it: Hillary Clinton. I mean, it’s not impossible to think that this would completely elude a person who is the Secretary of State, as well as a former First Lady of the United States, who is currently working for the most social media-savvy president who ever presidented. But when she goes ahead and makes her own entry for the site? How do we handle how cool this is? How?

Rather than keep you in suspense, here is the newest entry to Texts From Hillary, from Hillary (autographed version): 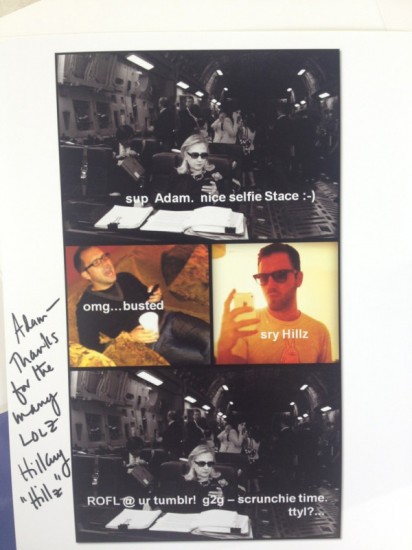 In case you can’t see the graphic, which also features site creators Stacy Lambe and Adam Smith, the text reads as follows:

For the record, Madame Secretary is a big fan of the Ryan Gosling post. Lambe and Smith got a surprise in their inbox when Clinton’s staff contacted the pair with a submission from the site’s subject herself.

“Her staff reached out to us with the submission yesterday,” says Lambe. “And we just met with her this afternoon. She was very delightful and thought kindly of us. I can tell you, her staff just thought the whole thing was great.”

The top pic comes from that meeting. Can you even believe that? Maybe Clinton was just tickled that there was a site on the internet that made her look like such a badass cool cat. Or maybe it was just nice, for a change, to be a part of something that didn’t involve the fate of the entire world. Maybe it’s just another brilliant political campaigning strategy leading into the 2012 race — or, perhaps, the 2016 race …

(Texts From Hillary via BuzzFeed, Mashable)