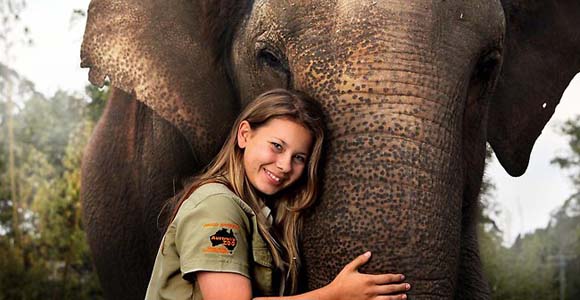 Bindi Irwin, the daughter of the late wildlife expert Steve Irwin, has made quite a name for herself over the last few years. She sings, she acts, and yes, she has a great interest in animals and the environment. She was recently asked to contribute to Secretary of State Hillary Clinton’s environmental journal but supposedly had her essay edited so heavily, she asked them to remove it from publication. What gives?

In a recent article in Sydney, Australia’s Daily Telegraph, the 14-year-old Irwin explained that she was asked to write about why she chose to work in wildlife conservation for Clinton’s “e-journal.” The 1,000-word essay focused mostly on overpopulation and when the publication edited and returned it to her for review, she was shocked.

“It was completely different,” the paper quotes her as saying. “I hadn’t said anything they had put in… my words were twisted and altered and changed. I was a little bit shocked to tell you the truth.”

Irwin used an analogy of a children’s birthday party to describe Earth’s expanding population. She wrote:

Think of it this way. Pretend for a moment that I’m having a party, inviting 15 of my closest friends. I’ve rented a room big enough to fit 15 people, I’ve bought 15 sandwiches for each of my friends to eat, and I have put together 15 party bags, one for each friend.

My party is about to start, and I hear a knock at the door. My friends are here! Only, when I open the door, 70 of my friends are standing there wanting to come to the party!

But apparently, the point about overpopulation was glossed over in the edit. Now, by “e-journal” we originally assumed they meant Clinton’s State.gov page , or just the U.S. Department of State site in general, but with a little digging we found the essay was supposed to be published as part of “Go Wild, Coming Together For Conservation,” a regular journal published last December on the State site as part of Clinton’s endangered species initiative. Perhaps the “political” statement was too much for a government-posted journal? Either way, it’s amazing to see how aware this teenager is, and becoming more so thanks to this situation.

“I was really sad and I think it was more frustration because I’m trying so hard to get the message across and I guess some people don’t want to listen,” said Irwin.

Her mother, Terri Irwin, said Bindi wrote to Clinton’s team saying, “What happened to freedom of speech? This is my opinion and I don’t want that edited out.” Thanks to News.com.au you can read Irwin’s original essay and the edited version. A spokesperson from the zoo Bindi has grown up in and around said, “She said that while it was a good message that they were trying to convey in the publication, she just wanted her whole essay to be printed rather than just a snippet of it without the other points she wanted included.”