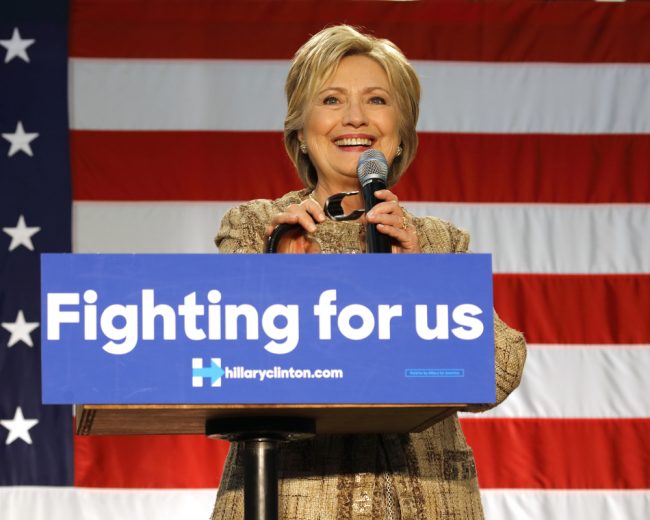 Last Friday, The New York Times published an article revealing an instance of sexual harassment from within Hillary Clinton’s 2008 presidential campaign. According to the report, a senior adviser named Burns Strider (a low-level comic book villain name if ever there was one) was accused of harassing a 30-year-old female aide, both touching her inappropriately and sending her multiple “suggestive emails.”

A number of advisers reportedly tried to convince Clinton to sever ties with Strider “and people familiar with what took place did not want to see Mrs. Clinton blamed for the misconduct of men she was close to.”

But she didn’t fire him. Instead, he was docked pay, ordered to undergo counseling, and (according to Clinton) demoted. The woman was moved to a new job.

After the article was published, Clinton posted a brief statement to Twitter, saying she was “dismayed” when the incident took place.

A story appeared today about something that happened in 2008. I was dismayed when it occurred, but was heartened the young woman came forward, was heard, and had her concerns taken seriously and addressed.

She also said she reached out to the woman “to tell her how proud I am of her and to make sure she knows what all women should: we deserve to be heard.”

Yet for many, that wasn’t enough of an answer. The fact that Strider was kept on is disappointing in and of itself. That the woman was forced to leave her job–no matter that there was some “concern” that she not be demoted in the transfer–is even worse. The burden of making sacrifices in order to remain unharassed often falls to women, and it’s inexcusable.

Last night, Clinton posted a much longer response on her Facebook page. She recounts the story of what happened, and the details are nearly the same as those described in the NYT. She’s not denying what happened. And she says she “very much understand[s] the question I’m being asked as to why I let an employee on my 2008 campaign keep his job despite his inappropriate workplace behavior.”

She explains that she didn’t fire Strider because she didn’t think that was “the best solution to the problem.” Instead,

He needed to be punished, change his behavior, and understand why his actions were wrong. The young woman needed to be able to thrive and feel safe. I thought both could happen without him losing his job. I believed the punishment was severe and the message to him unambiguous.

Additionally, she goes on to say that she believes in second chances. Though, in Strider’s case, he “squandered” that second chance. While there were no more complaints against him made during the campaign, he was fired years later from another position. Clinton writes,

That reoccurrence troubles me greatly, and it alone makes clear that the lesson I hoped he had learned while working for me went unheeded. Would he have done better – been better – if I had fired him? Would he have gotten that next job? There is no way I can go back 10 years and know the answers. But you can bet I’m asking myself these questions right now.

What Clinton doesn’t note, though, is that the position he was eventually fired from was leading a super PAC designed to support Clinton’s 2016 election campaign. While it was an independent group, it undermines Clinton’s stated regret to know that she still had such close ties with Strider so recently.

She also doesn’t mention that, according to the NYT, Strider never attended that mandatory counseling. Why was Clinton willing to ignore that?

Clinton says she reached out to the woman he harassed. She writes,

She expressed appreciation that she worked on a campaign where she knew she could come forward without fear. She was glad that her accusations were taken seriously, that there was a clear process in place for dealing with harassment, and that it was followed. Most importantly, she told me that for the remainder of the campaign, she flourished in her new role. We talked about her career, policy issues related to the work she’s doing now, and her commitment to public service. I told her how grateful I was to her for working on my campaign and believing in me as a candidate. She’s read every word of this and has given me permission to share it.

While I’m very glad that this woman felt fulfilled by her new position, I find myself put off by the “so everything worked out for the best” mentality being displayed here. Clinton writes, “In other words, everyone’s now on their second chance, both the offenders and the decision-makers. Let’s do our best to make the most of it.” Except the offender here is now actually on his third chance (having been fired from his second) and after being forced to leave her job, his harassment victim could just as easily not have landed in a position she loved.

Worse still, Clinton comes dangerously close to the “it was a different time” rhetoric we hear so often when it comes to issues of sexual misconduct. Taking a dig at the NYT‘s  decision to reinstate Glenn Thrush, their writer accused of serial sexual predation, she writes,

A decade from now, that decision may not look as tough as it feels today. The norms around sexual harassment will likely have continued to change as swiftly and significantly in the years to come as they have over the years until now.

Over the past year, a seismic shift has occurred in the way we approach and respond to sexual harassment, both as a society and as individuals. This shift was long overdue. It occurred thanks to women across industries who stood up and spoke out, from Hollywood to sports to farm workers – to the very woman who worked for me.

Clinton says she thinks the changing attitude towards sexual harassment and assault is “a good thing.” But she fails to adequately take responsibility for seemingly furthering those existing attitudes. It has always been easier to sweep things under the rug, to transfer women and give men “second chances.” It is only very recently that Clinton’s actions here would likely not have been tolerated. That does not mean her refusal to fire Strider–despite multiple advisers telling her she should do so–and transferring the woman was ever acceptable. But she was allowed to do these things quietly because the public attitudes were different then, and so she did.

Clinton notes that this situation was unusual because “There was no man in the chain of command. The boss was a woman.” In that case, “Does a woman have a responsibility to come down even harder on the perpetrator?” I would argue no. But when it comes to respecting and valuing women in the workplace and protecting them from harassment without derailing their careers, a woman may–and this particular woman, who has written and spoken so eloquently about how her experience of being a woman in law and in politics shaped her, certainly did–have to hold herself to the standard not of what men in her position do, but what we wish they would do.

Clinton herself says “I do believe that a woman boss has an extra responsibility to look out for the women who work for her, and to better understand how issues like these can affect them.”

Finally, there’s the issue of timing with this statement. She published it a matter of minutes before Trump’s State of the Union address was scheduled to begin. While an aide insisted “It’s simply when she finished writing it,” that’s hard to believe. Hillary Clinton is a shrewd politician with a decades-long history in the public eye. I have trouble believing she didn’t consider the potential benefits of dumping her statement at a moment when news outlets and public attention would be elsewhere. (I’m also surprised she didn’t see how that would surely backfire.)

Ultimately, as a strong fan of Clinton’s, I’m saddened by her statement. There are a lot of comments responding to her post, saying she shouldn’t have to apologize when we, to quote the first comment, “have a sexual offender in the White House and not a single Republican seems to care?” But as I’ve argued here before, that’s a dangerous metric. That’s tantamount to saying “When they go low, we go not quite as low.”

Again, I’m a huge fan of Hillary Clinton. I desperately wanted her to be president. I still do, literally every day.I want to not be disappointed by this statement. I want to find ways to justify it, to fill in the gaps and take it upon myself to presume what she must have really meant in the bits that fall short.

But the time for picking and choosing to whom we give those allowances in regard to their treatment of sexual harassment is over. I want more from Hillary Clinton. The words “I’m sorry” could have been a nice start. Owning her responsibility and not dumping her statement when no one is looking would have been great. Clinton and I aren’t “done,” as Alyssa Rosenberg at The Washington Post declared. But I can’t help but want more from this.