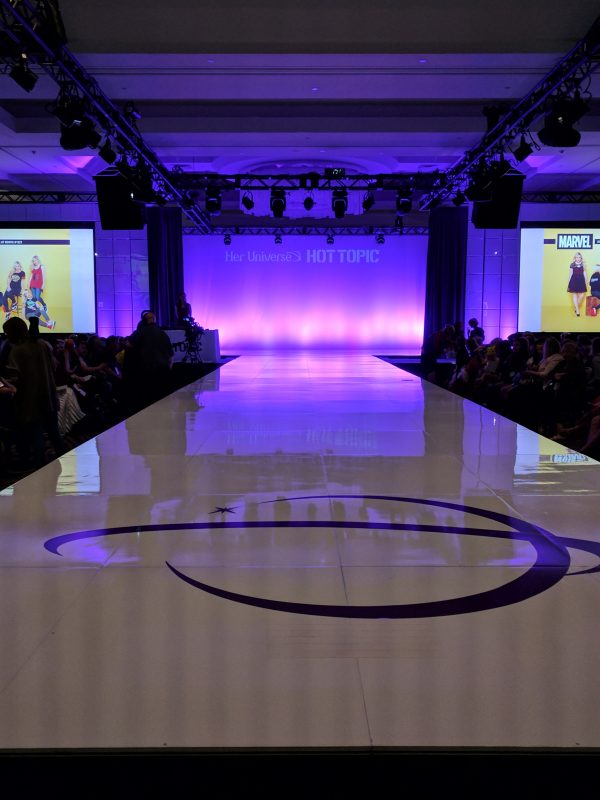 Ashley Eckstein is an unabashed Disney fan from way back, and that love of Disney permeated everything at last night’s 4th annual Her Universe Fashion Show at San Diego Comic-Con giving “geek couture” a magical night.

Right from the top of the show Eckstein, in a pre-recorded filmed segment, mentioned the fact that Disney was a part of her life from the time she was a little girl, and the biggest lesson she took away from all the stories and all the princesses was the idea that “if you dream it, you can do it.” That message was everywhere as 25 talented designers from all over the country competed for the opportunity to design a line of clothing for Her Universe and Hot Topic.

But first, DJ Amanda Jones lent the evening her awesome mixes as Her Universe showed off some of their already popular lines from this year, as well as announcing a new line coming out based on shows from the Disney Channel! The biggest hit, of course, was their Wonder Woman collection, which got the loudest applause of all Her Universe’s lines.

Fashion show judge and Senior VP of Merchandise and Marketing, Cindy Levitt, said that the Wonder Woman collection was the best-selling collection in the history of Hot Topic! As if we’re surprised.

And speaking of judges, there was a panel of professionals with the difficult task of choosing two of the three winners (the third is a winner the audience votes on) that would receive the opportunity to design for Hot Topic and Her Universe: in addition to Levitt, there were previous Her Universe Fashion Show winners Hannah Lee-Kent, Jesse Thaxton, and Camille Falciola; popular cosplayer Yaya Han; Disney Style editor Nicole Myknott, and special guest judge, actress Harley Quinn Smith, who was really endearing as she talked about the fact that, having grown up an emo girl, Hot Topic was where she did all her shopping, and it came to mean so much to her. So, for her to have the chance to help Hot Topic direct the future of its brand by helping choose the designers of its next line with Her Universe was a dream come true.

Then finally, the finalists for the Her Universe Fashion Show grand prize were finally given the floor to send their looks down the runway.

So, who will have the privilege of designing Her Universe/Hot Topic’s next big line? For the first time in this show’s history, there was a tie from the judges! The winners chosen by the judges were Rose Ivy’s take on Doctor Strange and Lindsay Meesak Orndorff and her dramatic interpretation of Princess Mononoke. The Audience Winner was Grace Johnston’s “Don’t Panic,” a tribute to Hitchhiker’s Guide that reminds us of the importance of towels (and yes, her entire ensemble is made from towels!).

The Disney vibe continued to flow when it was announced that the new line the winners will be designing a Disney Princesses-themed line! Even better? They won’t only be designing apparel, but full looks. So we’ve got a whole bunch of new accessories to look forward to from Her Universe, too! And the Disney collaborations don’t stop there.

Eckstein announced that she’s working on a book for Disney! Called It’s Your Universe, it will be Eckstein’s guide to doing what she’s managed to make a whole career doing: following her dreams.

Getting to see these talented designers display their gorgeous and intriguing work was amazing, but the best thing about the Her Universe Fashion Show is that Eckstein is insistent on being inclusive. All the models, some the designers themselves, others models brought in for the show, were a variety of body types and race/ethnicities. As the show has done every year, there was a section during which cosplayers of all ages, body types, races, and abilities were called up to have their turn walking the runway and showing off their style.

Her Universe continues to stay true to its mission, not only to help make people’s dreams come true, but to work to make everyone have access to those dreams through fashion. It was an inspiring evening, and I can’t wait to see what the three winning designers come up with.

(images by the author)