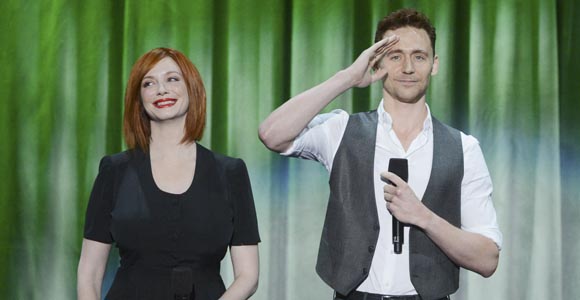 All kinds of news is coming out of the D23 Expo in California this weekend (we previously heard about casting for Finding Dory) but this bit took us by surprise. Christina Hendricks and Tom Hiddleston are setting off for the high seas with Disney’s animated film, The Pirate Fairy. Not only will Hiddleston be playing Captain Hook, he’ll sing, too.

According to USA Today’s report of the presentation, director Peggy Holmes introduced the two stars to a “rabid crowd of fans.” This does not surprise me. Remember what happened when Hiddleston showed up in full Loki gear at Comic-Con?

Anyway, The Pirate Fairy is another in Disney’s line of Tinker Bell films and will apparently be the first where Neverland is shown. Hiddleston will play James while Hendricks is voicing a fairy named Zarina. “James and Zarina are like best friends for a while. But you realize it’s all an act and he’s covering his ruthless and cunning nature,” said Hiddleston. “And his real name is Captain Hook. Captain James Hook.”

Hendricks said it’s been a life-long dream of hers to be in a Disney film and described her as “scrappy and inquisitive and smart and scientific and daring and really fun to play.” Holmes said Zarina is “a tough, kick-ass pirate with some vulnerability.”

And since we did mention Hiddleston will have a song in the film we should probably also mention the audience encouraged him to sing a bit of “The Bare Necessities” on the spot as a preview. The Pirate Fairy is set for a Spring 2014 (presumably direct-to-video) release.