“Hello Barbie” Lets You Talk to Your Barbie About Music Now, Like You’ve Always Wanted, I Guess 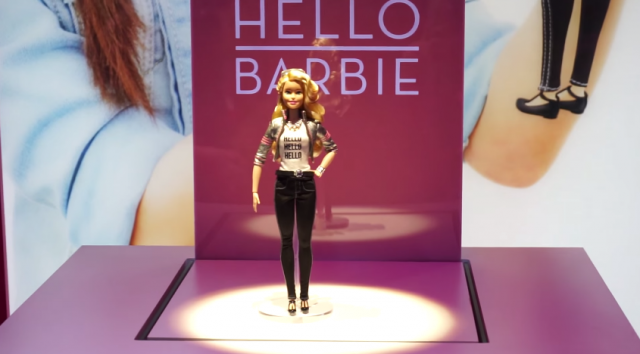 This was a long time coming. Let’s be honest with ourselves. Now we can actually talk to and “have conversations” with a Siri-like Barbie called Hello Barbie. According to The New York Times, she’s got over 200 pre-recorded responses to questions, and even has opinions on things like music. Taylor Swift? Hell yeah. My Bloody Valentine? Maybe not so much.

A not so small part of me really wants to find out Barbie’s opinions on bands like The World Is A Beautiful Place And I Am No Longer Afraid To Die (real band, not kidding) and The Protomen. Frankly, if she’s not down with either of those, then I don’t even know what else we would be able to talk about.

Of course, she has things to say that aren’t just about music–she’ll share her full name with you (Barbara Millicent Roberts), or even answer questions about God. And your questions are totally being recorded.

A microphone, concealed inside Barbie’s necklace, could be activated only when a user pushed and held down her belt buckle. Each time, whatever someone said to Barbie would be recorded and transmitted via Wi-Fi to the computer servers of ToyTalk. Speech-recognition software would then convert the audio signal into a text file, which would be analyzed. The correct response would be chosen from thousands of lines scripted by ToyTalk and Mattel writers and pushed to Hello Barbie for playback — all in less than a second.

Okay. Maybe I don’t need to talk to Barbie about music anymore. No, not so much.