Guillermo del Toro to Meet with Ron Perlman & Mike Mignola About Hellboy 3: “No Guarantee, But We Will Discuss” 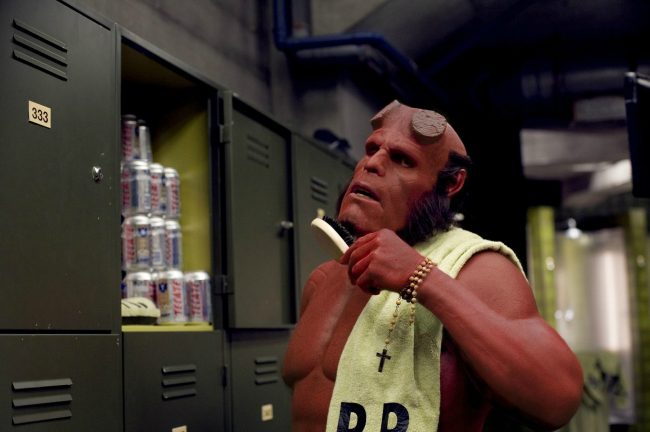 Buzz about a third Hellboy movie has begun to circulate once more, thanks to a poll that Guillermo del Toro posted on his Twitter account yesterday. The poll, which has just concluded, asked fans about their position on Hellboy 3. The only two options in the poll were “yes” and “hell yes,” because, really, why would we need any other options?

Guillermo del Toro then followed up that poll with a tweet stating that if the poll got over 100,000 votes, then he would have a discussion with Mike Mignola (the creator of Hellboy) and Ron Perlman (the star of the other two Hellboy movies) about Hellboy 3.

The HELLBOY III is our chance to vote the right way in 2017! If 100k votes come in 24 hours I promise to have a sit down w Da Perl & Mignola

Of course, the poll ended up getting over 100K votes. It actually got 132,938 votes before closing, and that was just a 24 hour poll to gauge interest in the movie!

We have gone past the 100K votes. I will arrange the sitdown w Ron & Mignola to talk HBIII. No gurantee but we will discuss. Wish us luck!!

As del Toro states in his follow-up tweet, there’s “no guarantee” that this sit-down chat will result in Hellboy 3. There’s funding to consider, as well as who would write it, and whether anyone’s schedule could allow for the movie to happen at all. Last year, Perlman gave an interview in which he conceded that the movie would “probably never happen,” (oh ye of little faith!) and went on to say that he and del Toro “don’t talk about that anymore, because he’s busy, and I’m busy. Maybe one day he’s going to call and say, ‘Hey, let’s do it.’ But for right now? We’re happy discovering new worlds to conquer.”

Sounds like Perlman is about to get that “hey, let’s do it” call from his buddy Guillermo del Toro, who as we all know, never gives up on his dreams, even when all seems lost. Hellboy 3 has been a dream for a long time. It would be nice to see that franchise get the send-off that it rightly deserves.

(via CBR, image via Imgur)