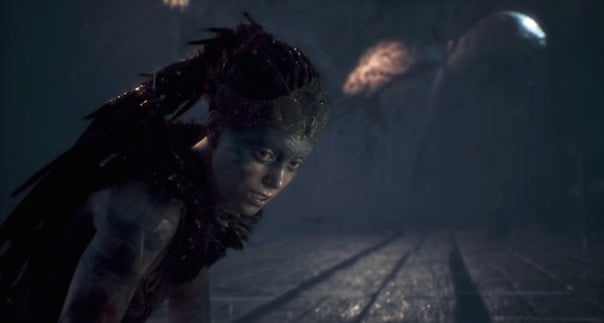 “You cannot overcome suffering if you refuse to look at it” is a line spoken to the titular character in Hellblade: Senua’s Sacrifice. It also serves as something of a thesis statement for the game, in which a warrior traverses the Norse mythology-based Underworld to redeem the soul of her deceased love. In a medium saturated with glory or duty-spurred warrior archetypes, Hellblade gives us something sorely needed: an achingly realistic portrayal of how women experience and cope with severe trauma.

It is important to note Senua’s physical aptitude. She’s a skilled warrior, on par with one of any gender, and this is important to her journey. Still, it isn’t her sole source of strength. Combat play is interspersed with stretches of puzzle-solving and long, revealing cutscenes that make it clear to the player that Senua’s emotional fortitude is exactly as vital to her survival as her battle prowess. Even during combat, each individual fight is deeply felt, as opposed to cutting down swathes of foes, then sprinting off unaffected.

Hellblade’s chief distinguishing feature is its aural atmosphere. It’s best played with headphones, as the information the player receives through sound is crucial to gameplay. The enveloping soundscape doesn’t just guide the player; it gives them immediate insight into Senua’s state of mind. When the way through Hel becomes especially bleak and terrifying, you hear it in Senua’s shaky breath. The graphics are excellent, but there are still intimacies of expression that technology can’t artificially generate. This is where Hellblade ingeniously supplements with sound. Senua’s terror and trauma is evident and unfiltered, making her courage and perseverance that much more affecting.

Women have been soldiering on in the face of immense hardship for as long as they have existed. In a world where women are so often abused and disenfranchised, Senua’s journey is more universal that it seems at first glance. So many of us have experienced significant loss and mistreatment, yet still rise to the unfair expectation that we provide care for everyone other than ourselves. Senua plays this out on a grander scale than the average woman, but at its core, it’s still the story so many of us find ourselves living out on repeat.

Indeed, the entire reason Senua single-handedly storms the gates of Hel is to save someone she cares for. She doesn’t come for revenge. She doesn’t come to prove herself. She comes to do right by her loved one, even when no one would blame her for giving up or moving on.

Senua is “cursed” with something referred to in-game as “The Darkness,” a clear allegory for mental illness. (The game begins with a trigger warning for realistic simulations of psychosis.) Senua was born experiencing the world in a way different from others, which unfortunately begat so much of her situational trauma, as often is the case for women who struggle with mental illness. Some (including Senua herself at times) view her as an abomination, but a precious few believe in the enormous strength she has already shown.

Trust in these allies is essential to Senua’s survival, even as she maneuvers through a hostile world, even as her own mind deceives her. Breaking through the fog of harmful voices, Senua’s lost love Dillion, her old friend Druth, and her mother Galena all speak wisdom, guidance, and motivation to her. She cannot make it through alone. Accepting help from her loved ones is crucial. In this, Hellblade illustrates one of womankind’s most incredible abilities: that of remaining open no matter how badly the world wants to see them hardened and isolated.

Senua also must learn to trust herself, broken as she may be. Women are vigorously socialized to assume responsibility for their own trauma. Slut-shaming and victim-blaming are used to dismiss the pain and suffering women face to such an extent that we often internalize these lies subconsciously. Senua is no exception. The voices in her head whisper blame and doubt in her darkest moments. “This is your fault,” they tell her. They beg her to give up—to accept that she is doomed.

She doesn’t. Senua fights her own internal battles with the same steadfastness and bravery she brings to her external ones, as women do. In order to succeed as Senua, you must sift through the voices that surround you, weeding out the ones that preach self-doubt and self-blame to focus in on the ones that offer you help and hope. If you know who to listen to, you will find crucial hints in both the combat and puzzle-solving aspects of the game, and Senua will be victorious.

Hellblade is not a simple or easy ride. It is emotionally taxing, painful, and terrifying. But it is well worth it to validate the everyday heroism of women who tirelessly grapple with the world and themselves, just because it’s the right thing to do.

Ashley Chupp is a Chicago-based writer, improviser, and crossword enthusiast. She can usually be found drinking Diet Coke at the bar or crying at Trader Joe’s.