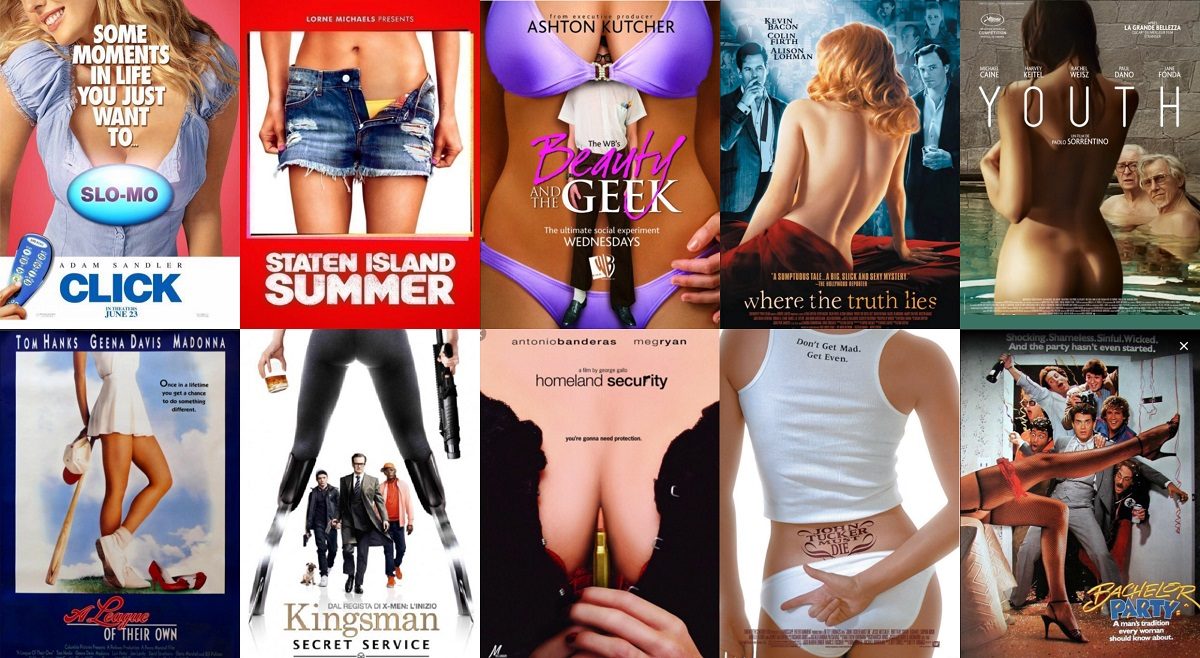 The Headless Women Project, started by Marcia Belsky, “seeks to bring attention to the still standard practice of fragmenting, fetishizing and dehumanizing the images of women we see in film, TV, book covers, and advertisement.”

As the initiative’s website explains, framing women’s bodies like this robs them of their personhood and suggests to the viewer that they’re objects rather than characters: “By decapitating the woman, or fragmenting her body into decontextualized sexual parts, she becomes an unquestionably passive object to the male gaze. The question of her consent is removed completely alongside her head, and her purpose becomes solely that of being looked at by men obediently. Her value is that only of her sexual appeal to men, and not of her personhood.”

While the Tumblr and Instagram have been around for years now, Belsky brought it back into the public conversation with an epic Twitter thread about her “favorite” headless women posters.

For example, here’s a poster for the reality show Beauty & the Geek, which ran from 2005-2008. Belsky called it “truly the most impressive example of @HlywoodHeadless I ever found.”

A post shared by HeadlessWomenofHollywood (@headlesswomenofhollywood) on May 4, 2016 at 3:05pm PDT

Then there’s this one for Hall Pass. “In most mainstream comedies, the women are either the Wife or the Butt,” Belsky writes. “Which one do you wanna be?”

In most mainstream comedies, the women are either the Wife or the Butt. which 1 do you wanna be! #wife #butt #decide

A post shared by HeadlessWomenofHollywood (@headlesswomenofhollywood) on Oct 5, 2016 at 10:19am PDT

Here’s the poster for John Tucker Must Die, which again has a headless woman with her back to the viewer:

A post shared by HeadlessWomenofHollywood (@headlesswomenofhollywood) on May 31, 2016 at 12:50pm PDT

Women of color, Belsky notes, are often erased from movie posters entirely. But when they’re included, they’re just as fetishized and dehumanized as white women.

Women of color are doubly oppressed and in turn made doubly invisible by Hollywood. Google the words “movie poster” and you’ll see that this erasure is undeniable. Keep scrolling until you find a non-white woman. Don’t worry, I’ll wait…Women of color, when present, can still be highly fetishized and their purpose often to be there as supportive background to men (and/or white ppl.) Her desires comes secondary to both, if considered at all. This is true even in films about oppression, which is what most popular films that feature people of color are. Plz see the site for more detail (link in bio). THIS WAS AFTER INDEPENDENCE DAY BTW….. #fragmentation #fetishization #objectification #headlesswomen #marketing #advertisement #invisibility #malegaze #poc #hollywood

A post shared by HeadlessWomenofHollywood (@headlesswomenofhollywood) on May 24, 2016 at 1:06pm PDT

Then there’s this gag-worthy, pseudo-artsy number to promote Youth:

A post shared by HeadlessWomenofHollywood (@headlesswomenofhollywood) on May 24, 2016 at 1:13pm PDT

And this gem for Click, starring the pride of Manchester, NH himself:

A post shared by HeadlessWomenofHollywood (@headlesswomenofhollywood) on May 14, 2016 at 3:17pm PDT

As Belsky further points out, some posters will even break their own convention in order to show women’s bodies rather than faces, as we see in the posters for Confidence:

As Belsky sums it up: “The overwhelming presence of these headless women in the images we see both perpetuate and is symptomatic of the overall idea that women exist primarily for the sexual pleasure and purpose of men.”

What are some of the most egregious headless/faceless posters you’ve seen, TMSers?