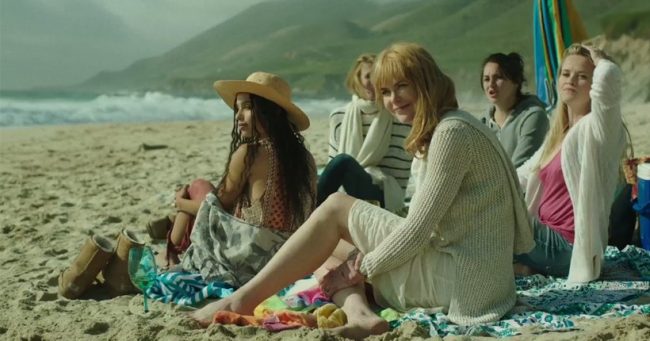 HBO’s miniseries Big Little Lies, based on the novel of the same name by Liane Moriarty, is a fascinating piece of work, and I mean fascinating in several ways. On the one hand, it’s a trashy murder-mystery soap opera involving rich white people (and one black woman, played by Zoe Kravitz). On the other hand, it’s an incisive examination of the ways in which women—particularly women of A Certain Age—are oppressed, suffocated, and taught to think that their lives are never enough.

**Spoilers if you’ve yet to watch the series. Be warned!** 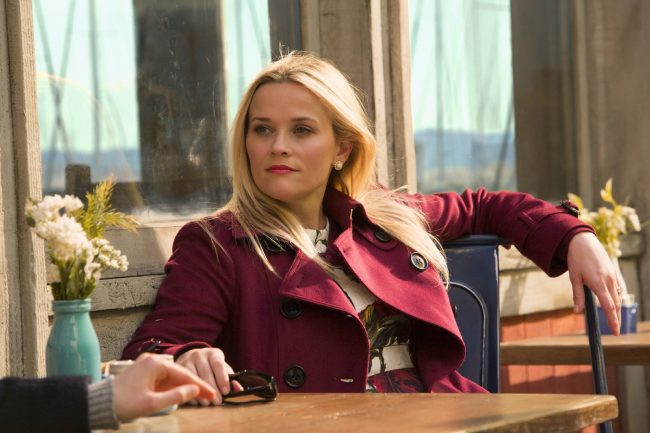 The series tells the story of five mothers of first grade children living in Monterey, CA: Madeline, Celeste, Jane, Renata, and Bonnie (played by Reese Witherspoon, Nicole Kidman, Shailene Woodley, Laura Dern, and Zoe Kravitz, respectively). Each of them seems to live a picture-perfect life, but as the series tagline says, A perfect life is a perfect lie. Each of them has stuff about her life that she wants or needs to change (or hide). Some have more “serious” problems than others, but all of them wrestle with the idea that they’re supposed to be happy with their lives, but they’re not.

Madeline Mackenzie is a once-divorced and remarried mother of two daughters, a sixteen-year-old named Abigail, and a precocious first grader named Chloe (PS – actress Darby Camp who plays Chloe is my favorite person in the world right now. She’s so great.).

Madeline loves drama. She is all about befriending people in town, because the more people’s lives she has to insinuate herself into, the less time she has to focus on her own less-than-interesting existence. Her husband Ed (played by Adam Scott) adores her and is super-responsible, but they hardly have sex, and she can’t manage to find any passion for someone so…nice. She can’t bring herself to stop talking about how much she hates her ex-husband Nathan (James Tupper) and his new wife, Bonnie for having such a perfect life, when Nathan wasn’t willing to do certain things for her in their marriage. She identifies as a mother first, so as her teenager needs her less and less, and her self-sufficient first grader becomes the social queen bee at school, she has less and less to do. So, she’s taken on producing community theater.

Producing and fighting for a production of Avenue Q directed by a man with whom she cheated on her husband the previous year.

Big Little Lies deals with Madeline and her life choices in several ways, but one of the most interesting involves her older daughter, Abigail, from her first marriage, who decides that she’d like to try living with Nathan and Bonnie for a while in order to escape what she sees as Madeline’s perfectionism. Madeline begrudgingly allows it. 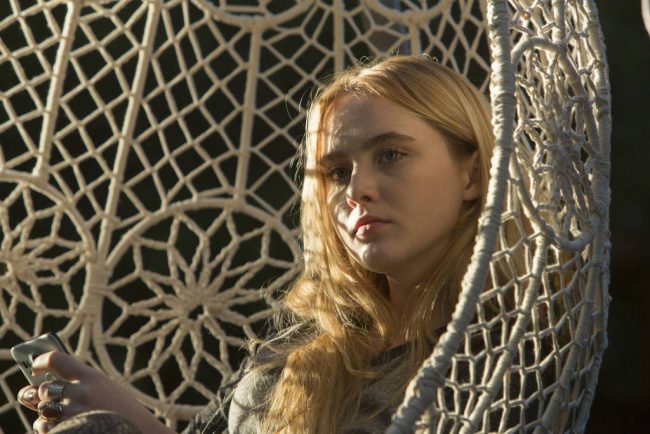 Then something out-of-the-ordinary happens. Abigail decides that she wants to raise money for Amnesty International and its fight against human sex trafficking…by auctioning off her virginity. Her reasoning? She says that if little girls of color around the world are bought and sold every day, no one should bat an eye that a privileged white girl chooses to do the same in solidarity. It’s certainly provocative enough to garner attention, and at least she has a choice, right?

Something about the way this was handled rubbed me the wrong way. It wasn’t the plot point itself. I actually thought that was a really interesting thing for a female teen character to choose to do. I had complicated feelings about how the adults around her responded to it in a way that speaks to something that we drill into the heads of girls and young women, but never into the heads of boys and young men. Your virginity is special. Your virginity is magical. Your virginity is the most important thing about you, so don’t “waste” it on something or someone that’s not special.

Abigail reveals her “secret project” to her stepmother Bonnie first, as Bonnie has proved herself to be the super-chill, balanced, Earth Mother-type who won’t fly off the handle (though for those of you who’ve watched the whole series, you know that’s not always the case). Now, Bonnie is not thrilled by this news, but she hopes to take a more subtle approach in guiding Abigail to “make the right choice” (ie: not put her auction up online), as she respects Abigail’s desire to help a worthy cause.

When Bonnie tells Nathan, however, his response is precisely to fly off the handle, rage into Abigail’s room, and take her laptop in a fury that makes her little stepsister Skye (Chloe Coleman) cry. Bonnie calms him down, and reveals that, no, she’s not okay with this, but that there are better ways to deal with Abigail than getting angry.

They’ve planned a “parenting dinner” with Madeline and Ed to ease the tensions between the couples and to talk about how best to deal with Abigail in general, so this new development obviously becomes part of the conversation. A drunk Madeline immediately blames Nathan for “bad parenting” before throwing up at the dinner table because she’s 3/4 made of wine at this point.

Later, she goes to talk to Abigail and tries to convince her not to go through with it. Her reasons?

She then says that Abigail will look back on this, probably not too far in the future, and think to herself, “What the fuck was I thinking? Why was I gonna fuck up my life like that?”

Madeline then proceeds to tell her daughter about how she cheated on her stepfather, so she “knows about fucking up.” And in the end, Abigail decides not to go through with the auction, because she doesn’t want the “methodology to distract from the cause.” 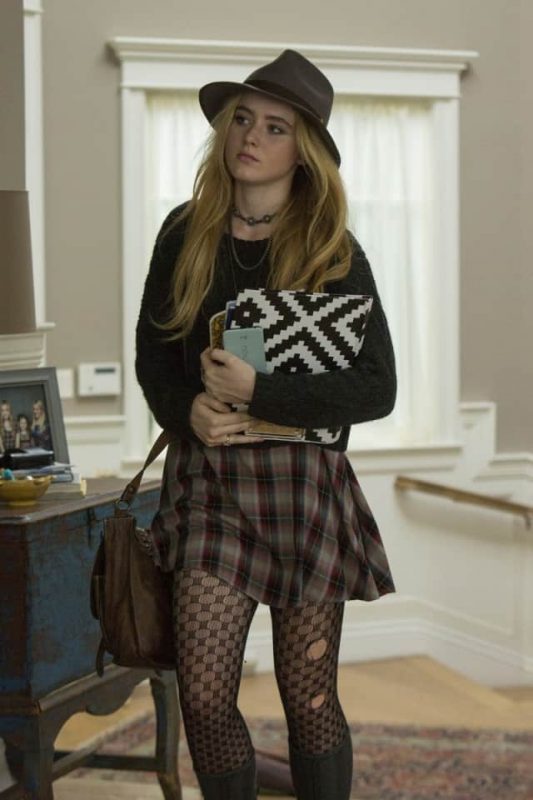 I think what rubs me the wrong way about this is the assumption that losing one’s virginity this way is a “mistake.” Madeline’s not giving her a song and dance about her body’s preciousness, yet she still wants to make sure her daughter knows that choosing to sell her body is always (always) a mistake, no matter what her reasons.

No one asks Abigail what the conditions of her auction are. Is she opening bids up to anyone who asks, or are there criteria that need to be met? What would the “winner” be entitled to? Are protections in place? Has she thought about any of this and how she would feel actually needing to be in a room with someone she doesn’t know and have sex with them?

Chances are, if Abigail did stop to think about all of those things, she would’ve decided not to do it on her own. And if the adults in her life would’ve framed it in that way, as in “your sexuality is your own, but just think about the possibilities first and what that would actually mean for you.” Instead, it was approached as a mistake outright, with no context. Meanwhile, this is a girl who was already learning about sex trafficking. It’s a conversation she would’ve been emotionally mature enough to handle, but no one was having it with her. Instead, the adults in her life panicked.

Which is funny, because they were all trying really hard to be “progressive.” I’m sure most people watching were thinking that they would’ve reacted more harshly to Abigail’s announcement, but Abigail’s parents were genuinely trying not to “overreact.” That said, they couldn’t escape the inherent sexism that rests inside conversations about sexuality and virginity.

For boys, losing one’s virginity is an event one can’t get to fast enough (just don’t get anyone pregnant). For girls, losing one’s virginity is an event that needs to be held off for as long as possible, because you can only do it once (the inherent threat of that is, once you’ve lost it, it’s gone. You’re spoiled. Forever.), so make sure its special. There’s a pressure placed on girls and their virginities that has nothing to do with their own pleasure, desires, or wants and needs. Instead, you have to lose your virginity “right,” because if you do it “wrong,” you will “fuck up your life.”

No one stopped to talk to Abigail about what she wants from her own sex life and sexuality.

There’s a great interview with Kathryn Newton, the actress who plays Abigail, over at Bustle, in which they talk about Abigail being the most self-aware character on Big Little Lies, and I believe there’s something to that. For all that the adults in her life were trying to “protect” her, they were doing so in a way that reinforced and perpetuated the sexist ideals that will ultimately keep her trapped if they’re not careful.

I’m glad that Abigail ultimately decided against the auction, because it’s clear that she didn’t give it enough thought. And while I’m not glad about the way those responsible for her addressed it with her, I did find the entire thing fascinating from a dramatic perspective. This storyline was a clear demonstration of one of the myriad tiny ways in which girls are taught and expected to be “perfect” based on standards other than their own.

Those are exactly the ways in which girls become grown women like the protagonists of Big Little Lies: women who’ve spent their entire lives “doing the right thing” without considering their own wants and needs, only to be dissatisfied with what they’ve become.