The Subtle Feminism of HBO’s Westworld | The Mary Sue

The Subtle Feminism of HBO’s Westworld 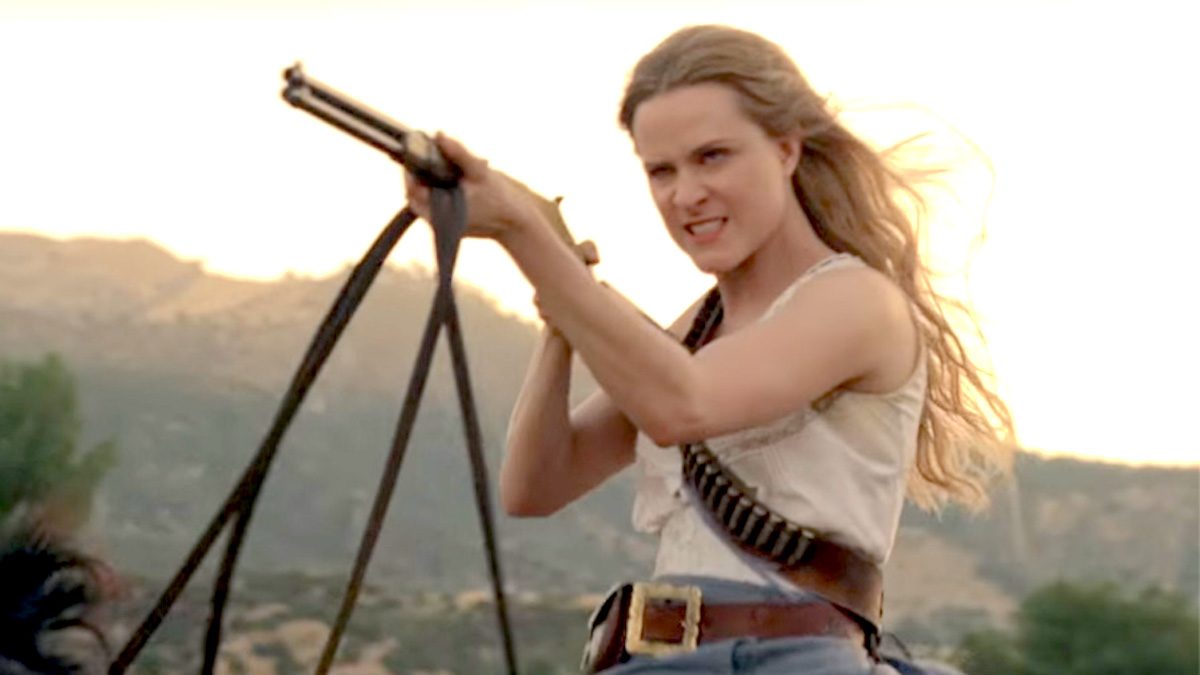 **Warning: The following article contains major spoilers for season one of Westworld.**

Westworld is many things: fascinating, shocking, confounding, violent, cerebral, beautiful, and ambitious. It’s one of those shows that means something. It’s as intricate and multilayered as one of the non-human “hosts” that populate the screen, a maze with a shocking revelation at its center. And could it be, like those hosts, secretly revolutionary? Could Westworld be feminist? Progressive? The answer, I think, is yes. I know you’re thinking that a show with so much nudity and violence against women couldn’t possibly have a deeply feminist message, but it’s not the violent events onscreen the define Westworld; it’s what they mean to the audience and how they affect the characters. Onscreen, park creator Dr. Robert Ford (Anthony Hopkins) posits that it’s suffering that creates the basis for our consciousness, because it gives us the desire to experience better, and that is exactly how the feminism of Westworld functions.

Before Westworld came on the air, much ink was spilled fretting about how a show about the ultra-rich playing X-rated cowboys, on HBO, would follow in Game of Thrones’ footsteps in the worst ways, with sex, rape, violence, and naked women used as little more than window dressing. Early in the first episode, it seemed that might be the case. In the first ten minutes of “The Original,” Dolores (Evan Rachel Wood), the winsome android at the center of the narrative, was dragged off to be raped by the sadistic Man in Black (Ed Harris), after watching her family get slaughtered. It had echoes of so many other sexual assault stories, including Game of Thrones, but like so many things in Westworld, it was more than what it looked like on the surface. And like Dolores, it had to go through this loop of female suffering in order to breaking that loop.

Let us compare how Westworld uses these common prestige TV drama elements: sex and violence. Game of Thrones is infamous for throwing in nudity and sex in even the most banal of scenes to add titillation and sensationalism. At first glace, Westworld looks the same. There’s copious nudity … but only a small percentage of it is sexual. Indeed, much of the time, the gaze of the camera is not sensual but detached.

It’s completely equal opportunity, giving us more male nudity than Game of Thrones ever conceived, and it has a purpose. The nudity of the hosts is used to dehumanize them, both in the eyes of the humans that control them, and of the audience. It is only the humans who respect the hosts as people—feeling, learning beings—who allow them clothing when they interact. We see nudity as a metaphor for the personhood and otherness of the host. Westworld also even goes beyond this, showing us hosts striped of their very skin, to only colorless artifice or mechanical guts. Whereas so many prestige dramas have used nudity to fill the screen with titillating eye candy, the nudity in Westworld tells a story. If a viewer finds something salacious in the nudity onscreen, that’s something they bring to the story, not what’s shown. Just as in the park, the story is what you bring to it.

While rape and violence are a part of Westworld, and a traumatic part of the pasts that the hosts rediscover throughout the show, it’s very rarely actually shown. Again, unlike Game of Thrones, where we saw the rape and near rape of many women, we do not see Dolores raped in Westworld, and this is a conscious choice. We don’t see any long sex scenes at all, just moments in brothels and hosts servicing guests. Just hints that get our minds spinning. In the same vein, many acts of violence take place offscreen. Westworld leaves it to our prurient imaginations to fill in the blanks.

This isn’t an accident. In a recent interview promoting season two, co-showrunner Lisa Joy discussed how the intention of the series was to examine and undermine the tropes of the western, of these abused damsels, and turn them on their head, while still being careful in how the actual violence is depicted. The founders of the Westworld park came to the conclusion, years apart, that suffering is the cornerstone of identity, and the first step towards self-actualization and true, independent thought. The audience brings their own knowledge of suffering to fill in the blanks for these hosts, and in doing so, makes their burgeoning humanity closer to our own.

This is where we find the most feminist and progressive aspect of Westworld: in the over-arching plot of self-realization for many of the hosts, of throwing off the shackles of their programing to achieve consciousness and rise up against the humans who have used them for their pleasures, both sexual and murderous, for years. The two hosts we follow to consciousness in the park are female-presenting, Maeve (Thandie Newton) and Dolores. Both have been used by the humans to indulge in their worst fantasies, embodiments of the restrictive archetypes of the virgin and the whore. And in coming into themselves, they learn to make their own choices (maybe?) to rise up against the men that created the suffering that defines them. Indeed, Westworld is about marginalized characters of all kinds coming into their own.

The progressive slant of Westworld also encompasses race. Along with Dolores and Maeve, most of the other main hosts that rise up against their masters are either female or non-white. Bernard’s (Jeffrey Wright) status as a black man is not accidental in terms of his role in the narrative of revolution. He was created as a tool by an oppressor to be used for oppression, and the reveal of his nature, as well as his forced complicity in his own slavery, remains one of the best twists in the series. We get to know other minority hosts: Hector (Rodrigo Santoro) and Lawrence (Clifton Collins Jr.), as well as the women Clementine (Angela Sarafyan) and Armistice (Ingrid Bolsø Berdal). There is only one significant white male host, Teddy (James Marsden), and in a lovely reversal of a normal trope for women, he only exists to further others’ stories—Dolores’s most importantly. Westworld is about the oppressed achieving the agency against the white patriarchy. This is even more true when you realize that the villain of Westworld is the ultimate personification of toxic masculinity.

The Man in Black, played with such chilling menace by Ed Harris, is terrifying, as unrelenting and single-minded as the murderous gunslinger robot of the original 1973 Westworld movie. He’s even more of a monster because he’s all too human, and his core motivations turn out to be as banal and self-centered as can be. He did not always show this monstrous face to the world; it was something inside him he discovered in the Westworld park, when he allowed his darkest urges to come out … and that was all motivated by his quest to be with Dolores. Our entire picture of the Man in Black changes when we learn that he is William (Jimmi Simpson), who we followed and rooted for throughout season one. He’s not some tortured soul or ruthless schemer—he’s the ultimate jerk, upset to be put in the “friendzone,” that nihilist edgelord we all knew in college who spouted junk philosophy and wondered why he didn’t get the girl.

The park and his loss of Dolores awakened something terrible in William, something dark and fatalistic. He wants to hurt and own and control and take. His quest for the maze is futile because the maze is for Dolores—for her to find herself at the center and rise up against the likes of him. Even so, he still wants “real stakes,” maybe to justify all the horrors he has inflicted on hosts, or maybe to unlock the man he once was. Dolores, however, is not here to serve him anymore. As she says to William, she is not a key. She won’t be his or anyone’s damsel, once she touches that magical, bicameral mind, and it’s empowering to see.

Whereas, so often, rape and violence, sexual abuse and exploitation are the rotten core of women’s tales on television, Westworld examines the effect of this violence on the characters and their humanity, as well as the people that inflict that violence. It questions those who come to Westworld hoping for violence and sex, and also critiques an industry that so easily profits on those vices. It also holds up a brutal mirror, not just to the authors of that violence, but to the audience itself.

Westworld’s first season ended with the hosts rising up against their masters, in bloody and terrifying fashion, and season two, which premieres on Sunday, promises to pick up all the same themes of consciousness, agency, abuse, consequences, and humanity that season one explored. I’m excited to see how the hosts fair on their own against the world. I’m especially excited for the exploration of ShogunWorld next door, and to perhaps see how these pivotal ideas of identity play out with hosts programed with a completely different cultural regard for individualism. As with our first trip to Westworld, the character we may come to know best is ourselves.