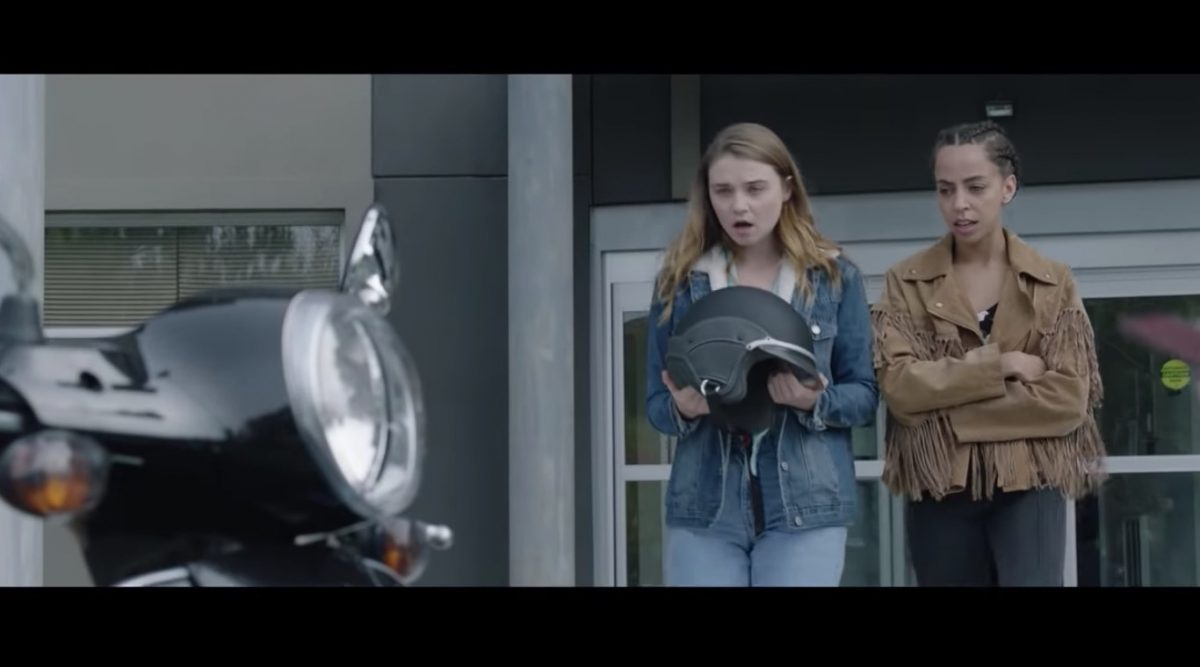 Hayley Law made a big hit not too long ago on The CW’s Riverdale as Valerie Brown, member of the Pussycats. Since then Law has proven herself to be a talented musician off-screen under the name Hayleau and pursues projects like Altered Carbon and now, the indie rom-com The New Romantic.

Law is part of a great supporting cast in The New Romantic which includes Brett Dier, Avan Jogia, Timm Sharp and her Riverdale co-star Camila Mendes. Outrageously cool and stylish, the 25-year-old actress plays Nikki, the best friend to the protagonist Blake (Jessica Barden) as both are going through their senior year of college. As Blake begins to try out sugar babying for a writing project, Nikki is supportive, encouraging—all the things a romantic comedy best friend should be. However, in writer-director Carly Stone’s debut film, the two girls have a solid and believable friendship that drew Law to the role.

I spoke to Law over email about the film, what she considers romance, and the need for scripts that include women and people of color as leads.

TMS (Charline): I think there’s a lot of interest in the movie because  people are fascinated by Sugar Babies, but The New Romantic is also about how dating, in general, has changed in terms of Tinder, hooking up, etc. What drew you to the film, and what do you think makes it a unique snapshot of romance?

Hayley Law: Definitely the story drew me to the film and the relationship that Blake and Nikki have made me want to bring it to life. I think that it’s really real. It’s an honest portrayal of what dating is like today. I really liked the story because it is very honest. I swear to god I’ve had a couple friends tell me very similar things, especially about Tinder and all that. Very very honest.

TMS: There are some reference to 90s rom-coms in The New Romantic. Are you a rom-com person? What are some things that have shaped your idea of “romance”?

Law: I’m definitely a rom com person. I love a good rom com. That’s a good question. I probably have a bad idea of romance, I mean I used to. Now to me romance is just mutual respect. But I think growing up definitely rom coms and tv shows always made me think of what kind of relationship you should have, but none of that shit is real. Honestly mutual respect is what to me is romance. Having someone who cares and you caring, and it’s genuine.

TMS: Tell me about what drew you to the role of Nikki. I really enjoyed the scenes of Nikki and Blake taking photos or hanging out at the park—you and Jessica Barden had great chemistry.

Law: I felt like the character was kinda like me, so I really liked how they were friends and not one of them got bitchy about anything. Nikki’s relationship with Blake on the Nikki side was very caring. First she kind of tells her “you should do it” and then in the scene where I’m doing her makeup, I’m looking out for her and worried she’s getting in too deep. I really liked how their friendship was, and that definitely drew me to the project.

The New Romantic hits some Canadian cities today! Go see it! Support it! 😂 & 😢. I’m so proud of everyone who worked on this film🌹🇨🇦

TMS: How was it working with Carly Stone?

Law: It was great! Carly is great. I Skyped her before I met her, and she was really sweet and cool. Then we started working together and she has a really great sense of humor and is an amazing writer, even she had to write scenes and switch things on the spot. She just understands comedy and has a fantastic sense of humor. She knows how to tell a story, not all comedic, but the way that she tells it she puts the moments in perfectly. I hope I get to work with her again.

TMS: The film has been praised for the way it lets its protagonist be messy and confused in a way that female characters don’t always get to be. What do you think about the kind of roles available for women in the industry? What kind of roles do you want to play?

Law: There are definitely not enough roles like the ones I want to play and in any situation, I’m not stuck on a certain type of role but I want it to be real, and I feel like there isn’t a lot of genuine even scripts, so it’s hard. I’m also picky, but I can’t afford to be picky (laughs). I really think we’re talking about it now, which is great, but there needs to be more action on having more women as leads and more people of color, because that’s real life.

TMS: I wanted to ask you a bit about your music. Touch is about heartbreak, it’s about being alright with being alone, and I feel like there’s an interesting connection to be drawn to The New Romantic there?

Law: Yeah I guess so, didn’t even realize that. Good to know! Ya, I mean the whole project is coming out in the next few months, but I started writing it as a little bit insecure and experiences, but every song is a genuine experience and is about going through being alone, and not being alone, and then being alone, being broken up with, breaking up with someone, and just being ok with it because these are experiences everyone goes through. So I wanted to make this feel connectable.

TMS:What are you working on now?

Law: Some music definitely. I’m writing a short film for a music video and I just finished a film with Charlie Plumber and Katherine Langford that’s coming out next year. Just freakin’ hustling for the next job.

The New Romantic is out in theaters now.