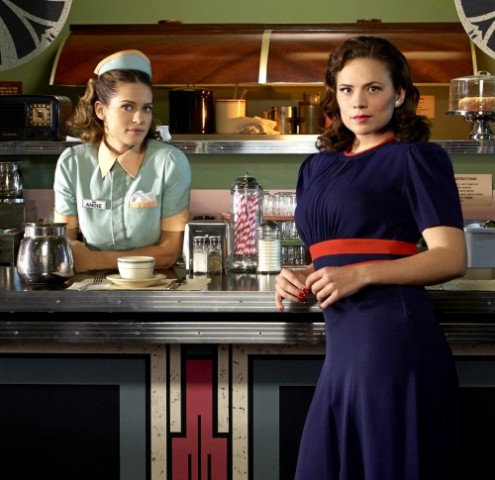 Agent Carter star Hayley Atwell’s Q&A session from Fan Expo is full of delightful moments, such as a discussion of Peggy’s relationships past and future. The Agent Carter showrunners have already teased a potential love interest for Peggy in season two, but the “Cartinelli” fandom will probably not see their dreams realized. Atwell’s say on the matter is heartwarming nonetheless:

The thing that stands out for me about Peggy and Angie is it’s seldom that you see on television a friendship between two women that isn’t founded on the interest of a man. There’s a genuine affection that they have for each other; whether or not you want to project the idea that it’s romantic or sexual is entirely up to you and how you want to view it. I think there’s a mutual respect that’s quite rare that I want to see more of in film and stories.

Also, Atwell explained, it was important not to let Peggy rush into a relationship at the beginning of Agent Carter:

So many people who saw ‘Captain America’ loved Steggy — Peggy and Steve. They loved that relationship, so I think if we got straight into the first season with a love interest, it would have undermined what they had together in the first season. It was very important that they establish what the loss of him did to her and the fact that she still tries to carry on his work throughout the season.

Then, it was beautifully wrapped up. I think people can move on. It’s part of the human nature to, once you have processed something very painful like loss, that there is hope to not replace that person, but to certainly make way for a new opportunity in life that gives you greater contentment and companionship. That’s what we’re exploring for the second season.

It definitely sounds like Peggy will be seeing someone new, then. Personally, I’d be okay with it if she stayed single for the entire run of the show, but hey, they’ve gotta make conflict-packed TV, right? As for what conflicts we might expect, it sounds like the entrenched sexism of Peggy’s workplace will remain a theme:

She’s got Sousa [Enver Gjokaj] and Jarvis [James D’Arcy] out there. They know who she is, which is good, so she’s got that support. But, there are many, many obstacles she’ll have to face. There will be a new nemesis. There will be new challenges for her. There will be diving into her past a little bit and it will explain certain torments that she has.

Peggy, by the very nature of the world in which the show is set, will constantly be up against obstacles in which she has to break down barriers and break down doors, which is the very nature of her character and what makes her so relatable. I don’t think that, even in today’s day and age, women are free from obstacles when it comes to having to prove themselves, particularly in the work place. Because of that, I think it’s all relevant that we put that in there.

Speaking of obstacles women face in the modern day, Atwell also mentioned her recently expressed wish to play the Doctor on Doctor Who, as well as her wish to play James Bond rather than a mere “Bond Girl.” As for the former, though, Atwell doubts it’ll ever happen: “I would probably never even get an audition to play the Doctor. I’m going to be banned from that whole institution.” Let’s hope not!

In lighter news, here’s Atwell’s adorable description of the run-up to the dubsmashing contest that she’s doing alongside James D’Arcy, versus the Agents of S.H.I.E.L.D. cast:

Alanna Masterson from The Walking Dead introduced me to it. I was like, “This is amazing.” I just started doing it. Then, of course, I showed James D’Arcy, who plays Jarvis, and we were having fun at San Diego Comic-Con. Then, Chloe [Bennet] and Clark [Gregg] were like, “What are you guys doing?” We’re like, “We’re just being awesomely great.” They were like, “Oh, yeah. We can do that.” Then, it just got a little competitive and then it got really competitive.

Awesomely great!! If you want to cast your vote for Peggy in the Dubsmash Wars, get on that.