Plus, a special guest shows up just in time for the holidays. 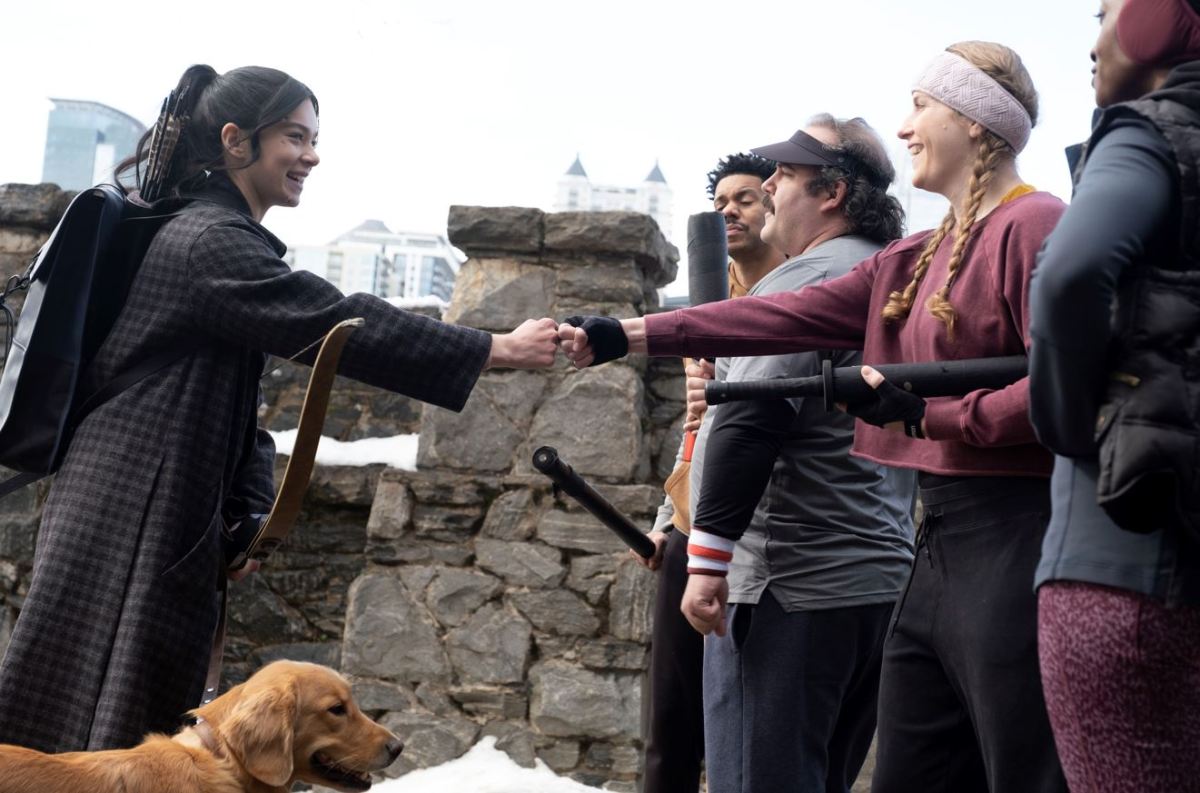 Hawkeye the series has to accomplish a lot in only 6 episodes. They need to introduce Kate Bishop as a future Avenger, devise a satisfying ending to Clint Barton’s Ronin storyline (and possibly to Renner’s tenure in the MCU?), and establish Echo/Maya Lopez as a character with her own upcoming series. Oh, and they have to accomplish all this in the framework of a Christmas story. Needless to say, it’s a tall order. But despite this pressure, episode 4, “Partners, Am I Right?”, slows down the action for some solid character building.

It’s a clever choice to have the plot take a backseat to Clint and Kate’s growing friendship/partnership, and it’s something these Disney+ series do exceedingly well. Supporting Avengers like Wanda Maximoff, Sam Wilson, and Clint Barton get short shrift in the MCU films, especially as the MCU cast of characters continues to grow. These series not only allow the characters to breathe, but they give them depth beyond kicks and quips.

So when the episode spends a significant amount of time with Kate and Clint donning ugly Christmas sweaters, watching It’s a Wonderful Life, and practicing precision coin tosses, I couldn’t get enough. Steinfeld and Renner’s chemistry just clicks, and they remain engaging amidst frozen drinks and half-baked plans.

But they’re growing friendship is a red flag for Eleanor, who doesn’t want to see her daughter working with an Avenger. She warns Clint that Kate isn’t a superhero, but Clint defends Kate’s skills. Eleanor reminds him that being good isn’t enough to keep her alive … after all, Natasha Romanoff was good too.

It’s hardly the first reference to Black Widow in the series, and Clint’s guilt and grief over what happened on Vormir remains a powerful emotional throughline. It’s the loss of Natasha that propels us into the second half of the series, as Yelena Belova (Florence Pugh) finally arrives to avenge her sister’s death.

During Kate and Clint’s Christmas heart to heart, she asks him about the best shot he ever made, and he tells her it was the arrow he didn’t loose. Clint was sent to kill Natasha, but quickly realized she was looking for a way out. It’s during this conversation that Kate realizes Clint is/was Ronin. To be honest, I thought this revelation would be more dramatic, perhaps with Kate rejecting her idol. But she takes the news in stride, convinced that Hawkeye was doing what he does best: helping people. Despite Clint’s warnings that he was trained to hurt people, to be a weapon for others, Kate disagrees.

These series also allow for textured performances from smaller players, like the LARPers who make a welcome return. In return for helping Kate get access to more arrows, they strike a deal to make more legit uniforms, with Kate likely to get a suit of her own. These scenes offer plenty of fun detail, from the gay cop whose wife gave her a personalized “bombshell” bag to the cookie-baking LARPer from the first episode. These character moments make Hawkeye feel grounded in the real world.

So much of Hawkeye is about heroes being held accountable for collateral damage. Kate is being chased by the mob because she donned the Ronin suit. Yelena is hunting Clint to seek vengeance for her sister. And the series MacGuffin, the Rolex stolen from the Avengers compound, clearly has some connection to Clint and his wife Laura (Linda Cardellini). Also, Laura can slip into German easily and clearly knows what Clint’s been up to. Is she a former spy? Let Linda Cardellini kick some ass!

Their mission culminates in a four-person rooftop fight, which sees Kate vs. Echo and Clint vs. Yelena. And in a clever bit of narrative bookending, Kate has a clear shot at Yelena but holds her arrow, sensing something important about this stranger. It’s a clever meet-cute for Black Widow 2.0 and the girl who would be Hawkeye.

Yelena tosses Kate off the roof of the building, but hooks her to a tether so she doesn’t fall to her death. Still, the visual of Kate going over the edge gives Clint Vormir flashbacks, enough so that he cuts her loose and breaks up their partnership.

Of course, they’ll come back together. They’re partners, whether Clint wants to admit it or not.

We’re still waiting to see what happens with Jack and Elanor’s connection to the tracksuit mafia, why the Rolex matters, etc., and I can’t say I’m dying for any big reveal here. Hawkeye‘s true aim is the emotional journey between Kate and Clint, and I’m more than content to follow that than a murder plot.

What did you think of this week’s episode? Let us know in the comments!