Science May Have Just Discovered Why Haters Gonna Hate

I'm not a jerk, I just have a "negative dispositional attitude." So shut up! 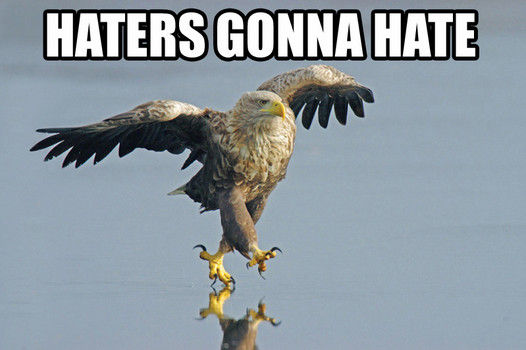 Why are some people just inclined to hate on things? To pick the dumbest, most negative facets of a situation and focus on them exclusively, ignoring anything good that might be there in favor of just ragging on things? According to a new study published this week, we may just be born that way, having a “negative dispositional attitude” from birth.

The study by researchers at the University of Illinois and University of Pennsylvania sought to explain why some people are just so relentlessly negative about the world around them, though they presumably did not take ask the simplest question involved there: whether the world objectively sucks. Instead, publishing in the Journal of Personality and Social Psychology, researchers suggest a new aspect of personality — the “dispositional attitude.”

Dispositional attitude is a fancy way of saying that some people are inclined to look on the bright side of things, while others are more likely to view the glass as half empty. Others of us, meanwhile, are more apt to simply mix metaphors. People with a positive dispositional attitude see the world through rose-colored glasses, while others are constantly waking up on the wrong side of the bed.

In the course of the study, researchers interviewed many subjects about a wide variety of unrelated things, from politics to soccer to cold showers. By analyzing their responses, researchers were able to determine what common sense has dictated since time immemorial — some people are just negative nellies.

Or, put in the parlance of our times:

Feel free to unleash your vitriol about this article in the comments below. We know you can’t help it.

(via Eurekalert, image via KnowYourMeme)