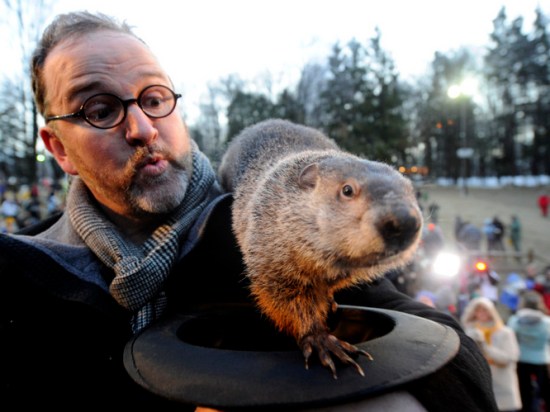 I do not belive in Punxsutawney Phil. I know that an overweight rodent can’t predict the weather better than NOAA, with their satellites and know-how. I know that Groundhog Day is the attempt of a small rural town to retain relevance and gain tourism dollars. I know all these things and I do not care because I love Groundhog Day, and so should you.

For the benefit of those outside the country, or perhaps living under a rock, Groundhog Day is a curious American celebration where a group of top-hatted men – called The Inner Circle – consult a groundhog by the name of Punxsutawney Phil about how long the winter will last. If on February 2nd Phil sees his shadow, we will have six more weeks of winter; if he does not, it will be an early spring.

The roots of this tradition remain vague, but they are unimportant. While many traditions like leeching and institutionalized racism have no place in the modern world, something as strange and harmless as a rodent-based celebration surely at worst does not matter and at best provides a moment of levity in an endlessly depressing 24 hour news cycle. Today, when NPR runs down the news on protests in Egypt, a flailing global economy, and war death, they will also mention this strange little Pennsylvania hamlet and announce news of a groundhog. For just a few seconds, we can all smirk to ourselves.

Sadly, there has been a continual erosion of strange traditional celebrations in America. We’ve moved into suburbs, we don’t know our neighbors, we’re friends with people through Facebook on the other side of the country but don’t know who sells us our milk. We may watch the 4th of July fireworks with the rest of the city, but when it comes time for the cookout, we retreat to our family gatherings. In fact, Halloween – where you accost strangers and neighbors and demand tribute after disguising yourself and ritualistically defacing a gourd – is really the last communal celebration Americans tolerate. With all its gore, general weirdness, and mixed up religious background, it’s a bit of a shock that it has survived at all.

As a user of the Internet, you’ve probably seen bits and pieces on the celebrations in other countries that strike us as so odd. The Japanese “penis festival” or the Catalan nativity scene “shitter” spring to mind. Personally, I sometimes feel sad that the United States in its founding rejection of the Old World and the persecution of its native people missed the chance to have the traditions that give modern societies such flare. The old Chevy ads which sought to encapsulate the American experience as “hot dogs, baseball, apple pie and Chevrolet” paints a sad portrait. Surely we can do better than low-quality meat products as part of our cultural definition. It would be a gross overstatement to say that Phil the groundhog or Halloween are what make up the American experience, but they are something valuable. We’ll always be a young nation, but that doesn’t mean that we can’t be any less eccentric and beautiful than an ancient civilization.

In reality, Groundhog day is a farce of a tradition. The Inner Circle with their pomp and circumstance play the tongue-in-cheek roles of shamans. It’s not hard to see the entire exercise as taking the stuffing out of the same superstitions on which it rests. In this way, it celebrates our ingenuity and our rise above the ignorance of the past, while still having a good time with those kind of traditions.

It doesn’t matter what Phil sees when they take him out of his hole today. No one, excepting some fun-loving kids, expects that an overly large rodent has prognositcatory abilities beyond those of modern science. But it is important that we keep taking him out, that we keep “consulting” him, and that we continue the proud, silly traditions that can define a people. How drab would we be without things like this groundhog ceremony? Let’s keep the weird. Let’s keep the fun.