Has Craigslist Been Disrupted? | The Mary Sue

Has Craigslist Been Disrupted? 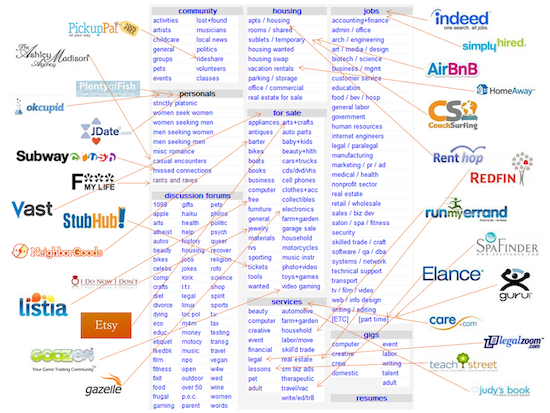 Venture capitalist Josh Hannah thinks it has. Though Craigslist might seem to be the very model of an entrenched mainstay of the Internet as we know it, thanks both to its established user base and its cheap operating costs, Hannah points out that it has about the same traffic now that it did at this time in 2009. He argues that Craigslist is slowly being chipped away at by startup competitors that focus on nailing one of Craigslist’s categories rather than being all things to all people:

Generally speaking, Craigslist has been “good enough” to not be disrupted head-on. Nevertheless, the world moves on, and the gaps in their product (due to a stubborn obstinate refusal to invest in technology) grow wider and wider. As tablets, smartphones, etc disrupt, and craigslist doesn’t invest in those platforms, the feature gap grows wider.
…
I have derived a lot of utility out of Craigslist over the years, and it has all come free, so I am grateful for that. But the site reportedly pulls in more than $100M in revenue a year (What is Craigslist’s revenue?) , has only a few dozen employees, continually under-invests in technology and does not innovate. I don’t think Craig’s a bad guy, but he’s harvesting $50M a year into his pockets and not improving the site. In ten years I think Craigslist will be an afterthought, whereas if he reinvested half of those profits into technology and product, it would have a real shot to be a category leader.

One question Hannah does not address: What new technology could improve Craigslist?