Harvey, The Kitten Born Without Leg Bones, is as Cute as Any Other Kitten, Cuter Than Many [Video] 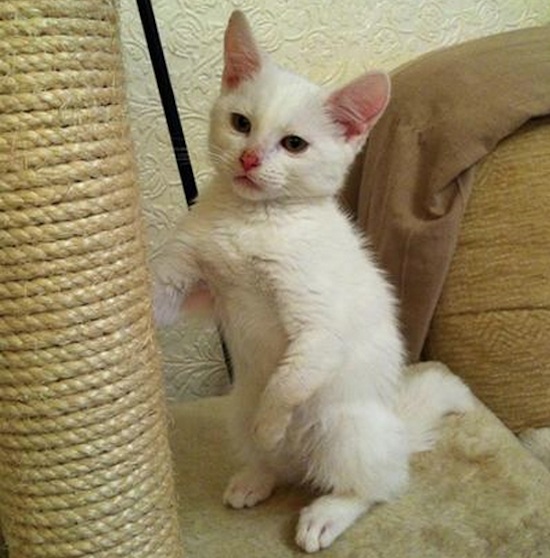 This is a Harvey, a spunky little kitten who, despite the above picture, is not just doing his best T-Rex impression. Harvey was born with a rare disorder known as radial agenesis — he has bones in his paws, and bones in his upper front legs, but no bones connecting the two, meaning he’s had to learn to walk around on his elbow in a sort of perpetual prowl. The condition hasn’t affected his demeanor, though — as you can see in the video below, he’s just as eager to chase a fake mouse as other kittens, and just as frustrated when his prey won’t succumb to his attacks.

After being sold by his first owner online, Harvey was taken in by the folks at the Glasgow branch of animal welfare agency Cats Protection, and is now thriving in foster care. And thanks to donations from folks around the world, Harvey is getting an operation to have metal rods installed where his leg bones should be, which should allow him to walk around normally. While he seems to get around fine on his elbows, it’s probably not very comfortable, and his condition could cause serious damage to his spine if left untreated. Also, following the operation he will technically be a cyborg cat, which is awesome.

To learn more about Harvey or kick a couple bucks the way of some folks who are doing good work for Harvey and plenty of other cats with less star power, you can visit Cats Protection Glasgow on Facebook here.