It's the first majority non-white class in Harvard's 381 year history. 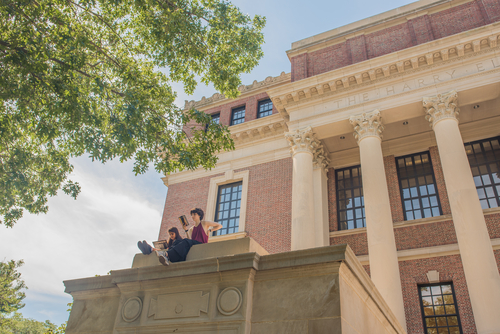 Harvard, in its over 381 year history, has never had an incoming class that wasn’t predominantly white—until now, that is. It’s kind of staggering (though wholly unsurprising) when you think about it. But the BBC announced today that this inauspicious record is (finally, at long last) broken. They also revealed the incoming freshman class’ breakdown by ethnicity: “Asian Americans make up 22.2%, followed by African Americans at 14.6%, Hispanic or Latino students at 11.6%, and Native American or Pacific Islanders at 2.5%,” which places the non-white population of the incoming class at a total of 50.9%. For context, the previous year’s class amounted to 47.3% identifying as any non-white ethnicity.

So, in total, the jump from year to year isn’t too much of a big, major shift. But to some, it is a big deal, as recently, Trump made headlines when he instructed the Justice Department to start “investigations and possible litigation related to intentional race-based discrimination in college and university admissions.” I won’t dive into how much bullcrap that is, simply because Dan does an excellent job already in that linked article.

But the introduction of a new Harvard class that is majority non-white (however slight) is a major revelation in that it’s taken this long for the institution to arrive at some resemblance of diversity. Harvard is one of the premiere universities in the entire world, and carrying a Harvard diploma not only demonstrates a measurable amount of privilege, but it also lends graduates a leg up, granted by the school’s prestige. Whereas such privilege only went to a majority of white students, it’s reassuring to see that the class of 2021 (and hopefully beyond) will be breaking that trend.

Stretching this further, take a look at how industries that struggle with diversities (cough cough tech cough cough) justify their inaction. Most of the time, they cite a limited pool of candidates from which to recruit, saying that the “best candidate for the job” is almost invariably always white because people of color are either not good enough or they just don’t exist at the level they’re looking for. If such a thing can be thought of as even remotely true (it’s not), then it stands to reason that we should look at our educational system and rethink how we go about offering opportunities to people. The bias and the prejudice run deep within our systems, and the educational system is very much included in that grouping.

Harvard’s new class might not represent a dramatic shift in how other colleges approach admissions—each one does go about their business in their own way, to be sure. But hopefully this news might call other colleges (ivy league or otherwise) to action, or at the very least get them to look at how their incoming classes break down. Today’s news is but a smaller step on the path to ensuring equal opportunity to all people, and its impact can only be measured by what people do with these new statistics.