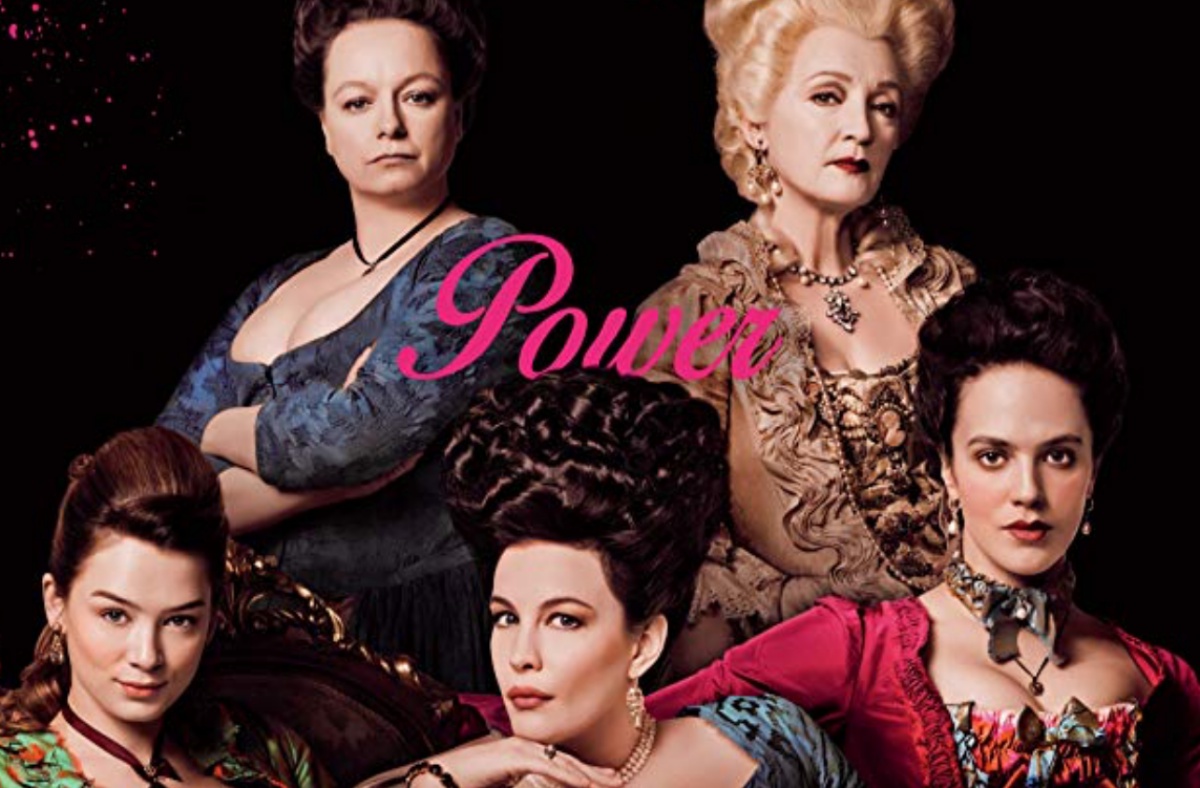 Today is the 4th of July and while there will certainly be people out in parks and on beaches celebrating with beers and whatever form of food product they eat on holidays, there are those of us who celebrate the 4th of July indoors. Netflix and holiday chill is a special form of celebration that I’m looking forward to indulging in.

The Hulu original series was one of my favorite shows last year. While it was overshadowed by The Handmaid’s Tale it is on it’s own a brilliantly done, funny and poignant story about women in 18th-century London living and surviving as sex workers. The story shows how, in a world where women are at the bottom, sex work is a way for many to survive, but it is also very cruel, opening women up to potential abuse and sickness from clients, as well as being a business where the madams make most of the money. Having a good one means at least getting some kindness, having a bad one can lead to being raped and killed by a client.

Harlot tells the story of three generations of sex workers: Lydia Quigley, the madam of a high-class brothel, Margaret Wells, the madam of a low-class brothel who used to work for Lydia Quigley, and the two Wells daughters, Charlotte and Lucy, who deal with the nature of being kept women to powerful and cruel men. The show is amazing, the costumes are stellar, and the show has an amazing cast of characters. It also proves you can tell a great period piece story with women of color and queer women.

Like everyone else, I love Wynonna Earp, especially because it fills the Lost Girl void in my heart, but Killjoys fills the void that Defiance left in my heart. Killjoys is a fun space adventure drama that airs on SyFy in America. The show follows a trio of bounty hunters: Dutch, John, and D’avin. They work for the Reclamation Apprehension Coalition (RAC), which exists in a four planet-and-moon system known as the Quad.

Much like other space dramas, there is a lot of worldbuilding, but what really matters are the amazing characters. Especially Dutch. Hannah John-Kamen is going to be launched into the major world stage in the upcoming Ant-Man and The Wasp Marvel film, but she has showcased amazing talent and skill during the run of Killjoys, playing a heroine who is both a badass and has moments of vulnerability. The other two main characters, John and D’avin are both really great male characters who have a great bond together as brothers.

Sometimes it is hard to believe that Elementary has lasted as long as it has. When it first came out, the idea of another Sherlock Holmes series seemed like a strange one, especially because Sherlock was so popular and becausesome people had a loathing reaction to the idea of a female Chinese-American Joan Watson. Yet here we are, six seasons later.

CBS’s Elementary isn’t a perfect show, but its greatest strength is the friendship between Joan and Sherlock. Not only have we watched them grow together as friends, the show establishes them as equals, with both balancing each other when their worst impulses come up. I especially love that while Sherlock is still an ass in many ways, he is filled with compassion for people and saves his loathing for people who deserve it, not the everyman. Plus, the focus it gives to the addiction element of Sherlock Holmes’ character is excellent.

Both Chewing Gum and Crazyhead were gone far before their time, but thankfully, both shows are on Netflix where you can binge watch them in full glory. Plus, because the episodes are short you could absolutely watch both series on the 4th of July.

Chewing Gum is the series written by the amazingly talented Michaela Coel about a young shop assistant named Tracey Gordon, who grew up in a restrictive and religious household and is looking to lose her virginity and enjoy life. Tracey’s character often breaks the 4th wall and Coel who is both a phenomenal comedic actor and writer isn’t afraid to make jokes at her character’s expense. While the show does take cracks at religion, it does so in a loving way. Plus the humor will leave you in stitches. Susan Wokoma, who plays Tracey’s sister Cynthia is also fucking amazing and she is on … Crazyhead.

Crazyhead is a horror-comedy about Amy and Raquel, two young women who are demon hunters and are brought together when the leader of the demons Callum, played by the amazing Tony Curran, attempts to kill them both. It is hilarious and sweet, if you are a fan of female friendships and The Buffy-aesthetic you’ll def love this show.

I cry whenever I watch this damn show. This British series tells the story of the midwives and the nuns of Nonnatus House located in the poor East End district of Poplar district in London during the 1950s. The series really delves into the nature of midwifery, medical advancements of the time as well as mishaps, and what it means to care for an urban area that sees between 80 to 100 babies born a year.

While there are lighthearted moments, the show does not shy away from the hardships of childbirth, poverty and what it means to be an independent woman in the 50s. Season 5 deals with the side-effects of the drug Thalidomide, which had been regularly prescribed for women suffering from morning sickness, but ended up leading to birth defects in children.

The show is emotional, uplifting and an important reminder of why health care is important and how important midwives and nurses have been to childbirth.

Black Sails is one of those shows that everyone knows is good, but outside of its fanbase, no one talks about it. Well, you should go and freakin’ watch it because while this show is a prequel to Treasure Island, it is really about the rise and fall of piracy in the Western world.

The series takes place during the Golden Age of Piracy (the 1650s to the late 1720s). Captain Flint and his crew fight to live free lives away from the pull of the government and the show is filled with characters who, due to their race, sexuality or ideology, do not have a place in the Empire. Over the course of its 38 episodes the show crafts some really interesting characters and gives audiences a different insight on what it meant to be a pirate.

And most importantly, when you’re a professional pirate you’re always in the best of company!

What will you be watching this 4th of July?