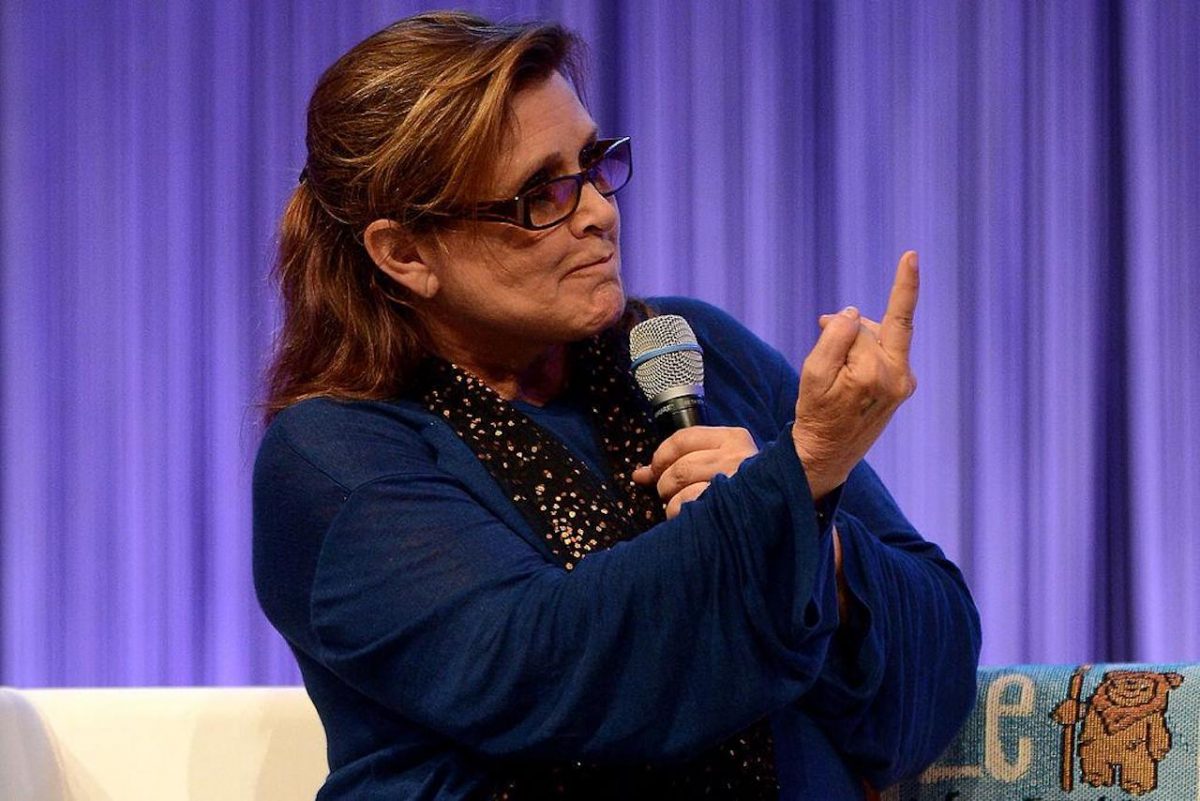 All I want to do in this world is make Carrie Fisher proud. I grew up idolizing her as Princess Leia, grew into a writer who loved reading her books and her stories and wanting to be able to capture an audience in the way that Carrie captured me. I wanted to be someone who was always true to myself and didn’t let anyone stop me from expressing what I was feeling.

So on days like today, when Carrie Fisher would have been 64 years old, I like to think back on why I love her so much. For me, she was one of the first celebrity women that I saw basically say “f**k you” to people when she didn’t like something. (I’d later go on to love Jane Fonda for a very similar reason.)

Carrie wasn’t afraid of standing up and defending herself or talking about things that weren’t considered “okay” by Hollywood’s standards. She was open with her struggle with mental health, she constantly was there for fans when they needed her, and she remains someone that many of us turn to when we need help and guidance. For the last 4 years, I haven’t been able to finish The Princess Diarist because I don’t want to finish hearing what Carrie had to say. (My copy is also signed so I don’t want to ruin it. Yes, this is a brag.)

But, throughout all my time loving Carrie Fisher, I’ve always remembered how she tried to be everything for everyone. I first got to see Fisher at New York Comic Con in 2016. We took a picture flipping off the camera, and it still remains one of my favorite things I own. After, I went to the Bright Lights screening and Q&A about the documentary film on the Fishers and Debbie Reynolds. In the movie, Carrie says that she’s no one’s hero, that Princess Leia is.

So, I stood up in front of all these people (and Marisa Tomei, and I’m still unpacking THAT information) and pointed out that that wasn’t true—that she’s my hero, not Princess Leia, because she taught me how to be true to myself in my writing and to never shy away from that. Later, I’d see her at the signing for The Princess Diarist in November and remind her of that moment and she told me that I could be both Princess Leia and Carrie. She told me I was a pretty girl, and I remember leaving so happy that my hero clearly enjoyed that moment. She followed me on Twitter, and I’d get little moments when I’d tweet some silly thing and see a like from Carrie.

All of that made me feel like I could actually make Carrie proud. So when she died, I cried. I mourned a celebrity in a way I would a family member because I felt like that little bit of me died too (as dramatic as that sounds), but then I remembered what Carrie Fisher taught many women like me. She taught us to use our voice, to not give a fuck, and say what was on our minds. That lesson was important growing up, and it’s extremely important now.

I often wonder what she would think of the world and how it’s going. Would she be just as angry on Twitter about Donald Trump? Would she be doing these virtual fundraisers for Joe Biden and Kamala Harris? I like to think she’d be replying to Trump over and over again and calling him out.

But days like today are both inspiring but hurt at the same time, because so many have shared their love for Carrie online and what her words mean to them.

Be the kind of person who would make Carrie Fisher proud. pic.twitter.com/k9CXUMbLiX

“It’s a man’s world and show business is a man’s meal, with women generously sprinkled through it like overqualified spice.”—Carrie Fisher.

Missing Carrie Fisher on what would have been her 64th birthday, but better to have loved her and lost her, you know, than never to have had her flip us off a thousand perfect times.
“If my life wasn’t funny it would just be true, and that is unacceptable.” pic.twitter.com/GC9RvIa4bH

“I don’t hate hardly ever, and when I love, I love for miles and miles. A love so big it should either be outlawed or it should have a capital and its own currency.”

the world will never stop missing you….. 💔 pic.twitter.com/0KcQwePz5B

In Carrie’s own words: Take your broken heart, make it into art.

I love and miss you, Carrie.