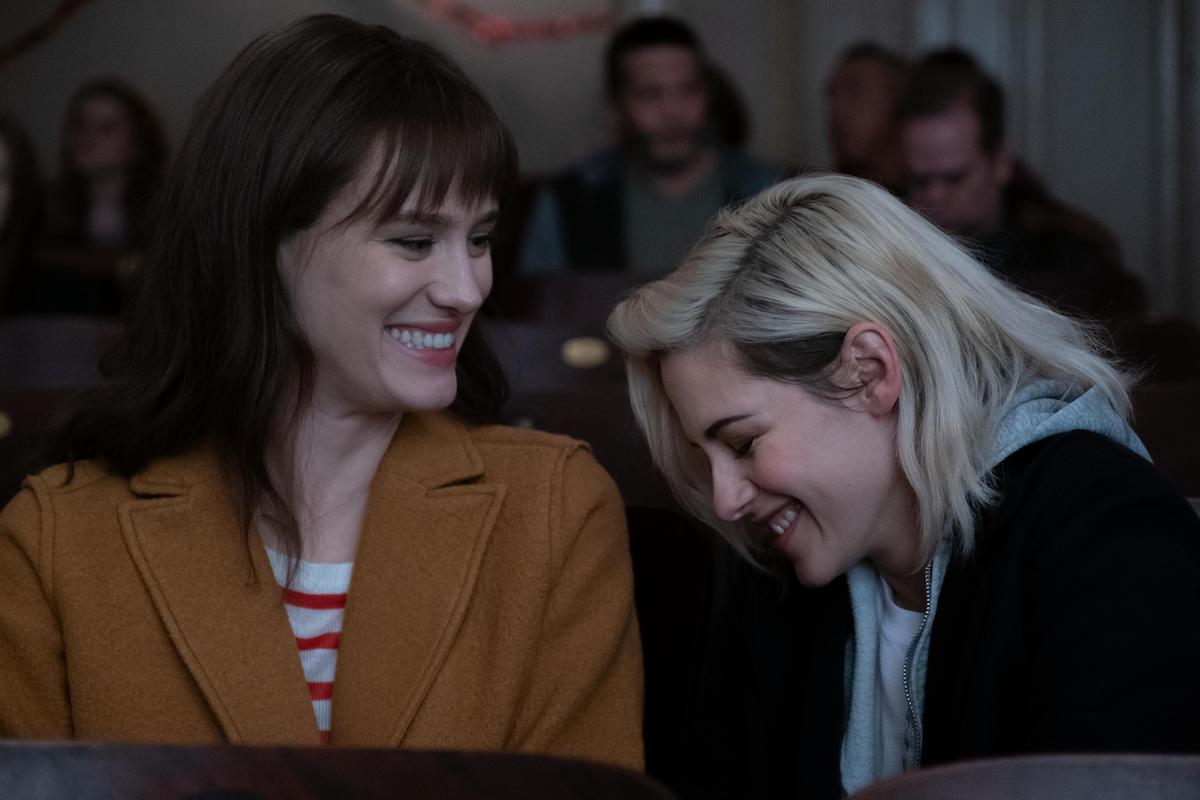 I look forward to Christmas movies all year long. Even—maybe even especially—the schmaltziest, most formulaic ones are perfect this time of year, when we’re all indulging in food and drink and other comforts. Holiday romcoms are the cinematic equivalent of comfort food and hot cocoa and I will never tire of watching a big city girl fall for a charming small town coffee shop owner or Christmas tree salesman or whoever it is that reminds her about the magic of the holidays.

Every so often, though, we get one of these movies that stands out and becomes a new genuine classic. I don’t know if Happiest Season will be that movie, but it definitely has potential.

There is much in this film that we’ve seen before. It’s a pretty standard “home for the holidays” scenario, as Harper (Mackenzie Davis) invites her girlfriend Abby (Kristen Stewart) to her parents’ house for Christmas, where Abby plans to propose to Harper before hijinks ensue. It rests heavily on some well-worn tropes, like Abby’s dislike of the holiday, Harper’s uptight, type-A family, and the fact that Harper hasn’t come out to her family—a fact that she (oops!) only tells her girlfriend as they’re pulling up to her family’s enormous house.

But the movie manages to feel more familiar than formulaic. Queer characters deserve to have stories told that aren’t always coming-out stories but writer/director Clea DuVall (best known as an actress whose career has spanned the last few decades from The Faculty and But I’m a Cheerleader to Veep), who is gay herself, approaches these characters with such care that Abby and Harper’s story feels entirely genuine, if not groundbreaking.

Of course, centering a holiday rom-com on the relationship between two women is groundbreaking for the genre, which historically has chosen to celebrate only straight (and white and able-bodied and neurotypical, etc etc) love stories. This movie is a huge step forward in terms of representation for a genre that, love it as I might, is woefully homogeneous. In addition to being great representation, Happiest Season is also just a downright lovely movie.

Without a doubt, the very best thing Happiest Season has going for it is its incredible cast. Mackenzie Davis and Kristen Stewart are both phenomenal and they’re not a single weak link in the whole supporting cast. DuVall’s script doesn’t always seem to know what to do with their characters and more than a few of them have storylines that don’t really go anywhere. In trying to give every single character a complete, eventful personal journey–Harper’s dad (Victor Garber) is running for mayor, her sister (Alison Brie) has conflicting feelings about leaving work to raise a family—parts of the movie feel both overstuffed and underdeveloped.

But the cast is stacked with stars including Dan Levy, Mary Steenburgen, Aubrey Plaza, and more, and they fill out every inch of their characters, making them feel entirely real and deserving of having their stories told, unnecessary as they might actually be to the movie overall. (The flip side of that is that other characters, like Harper’s other sister, played by Mary Holland and her ex, played by Plaza, are noticeably underwritten. Both actors also manage to make their characters feel much more whole than what exists on the page for them.)

I don’t know if Happiest Season will become the next major holiday classic, but it’s definitely the kind of movie that you’ll look forward to coming back to every couple of years. It’s a welcome addition to the holiday rom-com oeuvre, a genre that it fits snugly into as it pushes it forward.

Happiest Season is available to stream on Hulu starting today.

(image: Hulu)
Want more stories like this? Become a subscriber and support the site!