Hannibal Buress Sent a Lookalike to the Spider-Man: Homecoming Premiere | The Mary Sue

OMG, Hannibal Buress Sent A Lookalike to the Spider-Man: Homecoming Premiere In His Place 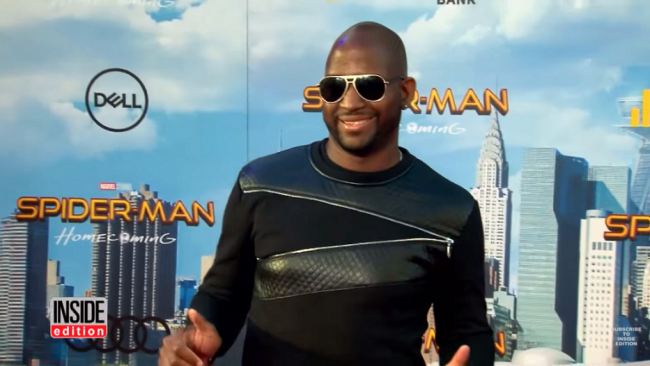 Hannibal Buress, who plays Coach Wilson in Spider-Man: Homecoming, was unable to attend the film’s L.A. premiere because he was down in Atlanta shooting the upcoming comedy Tag. Luckily, he came up with a very creative solution to his scheduling conflict.

According to Entertainment Weekly, Buress sent out some tweets on Wednesday, June 28 offering $500 to hire “a lookalike with solid comedic timing for an event tonight.” (The tweets have since been deleted.) Actor Joe Carroll took him up on the offer.

While on the red carpet, Carroll also gave interviews and signed autographs as Buress. When asked about his role in the film, Carroll gamely played along with the reporter in the video below – who I think genuinely believes that this is Buress.

“You know, it was a great opportunity,” Caroll said. “I had a lot of fun. Spider-Man‘s huge. You know, we grew up watching Spider-Man. So to play Coach Wilson, working with the cast…it was just a great time. I had a blast. I wouldn’t trade it for nothing in the world.”

“Did you have a particular gym coach [or] gym teacher that you modeled him after?”

“Not necessarily. You know, in high school I had a really tough coach. I wasn’t a big fan of physical education.”

Inside Edition also caught up with Carroll to ask him about the evening.

Buress was clearly enjoying the prank, as he kept cheekily tweeting references to “his” appearance at the premiere.

I’m out here at the @SpiderManMovie premiere. In theaters July 8th. pic.twitter.com/ggEdqt5oDr

Mostly, this prank is just hilarious. I love that Buress transformed a complication from his busy schedule into something clever and fun, and I am even happier that he expected to pay Carroll for his night. (Nobody should work for exposure.)

However, there’s also something profoundly uncomfortable about the reporter getting fooled by this prank. I mean, Buress and Carroll look similar, but only in the way that I look like every other ginger under 5’8” with a pixie cut. From people mistaking Franchesca Ramsey for Jessica Williams to the “I’m America Ferrera, not Gina Rodriguez” joke at the 2016 Golden Globes, it’s pretty well-established that uber-white Hollywood can treat actors of color as interchangeable. This interview is no exception.

As with all the best jokes, this stunt also makes a larger commentary. It speaks to both the inanity of red carpet questions (see how easily and vaguely Carroll cooked up responses) and the way that Hollywood views black actors – all while giving Burgess and his fans a good laugh.

(Via Vanity Fair and Entertainment Weekly; image via screengrab)