Review: Rage and the Renaissance in Hannah Gadsby: Douglas 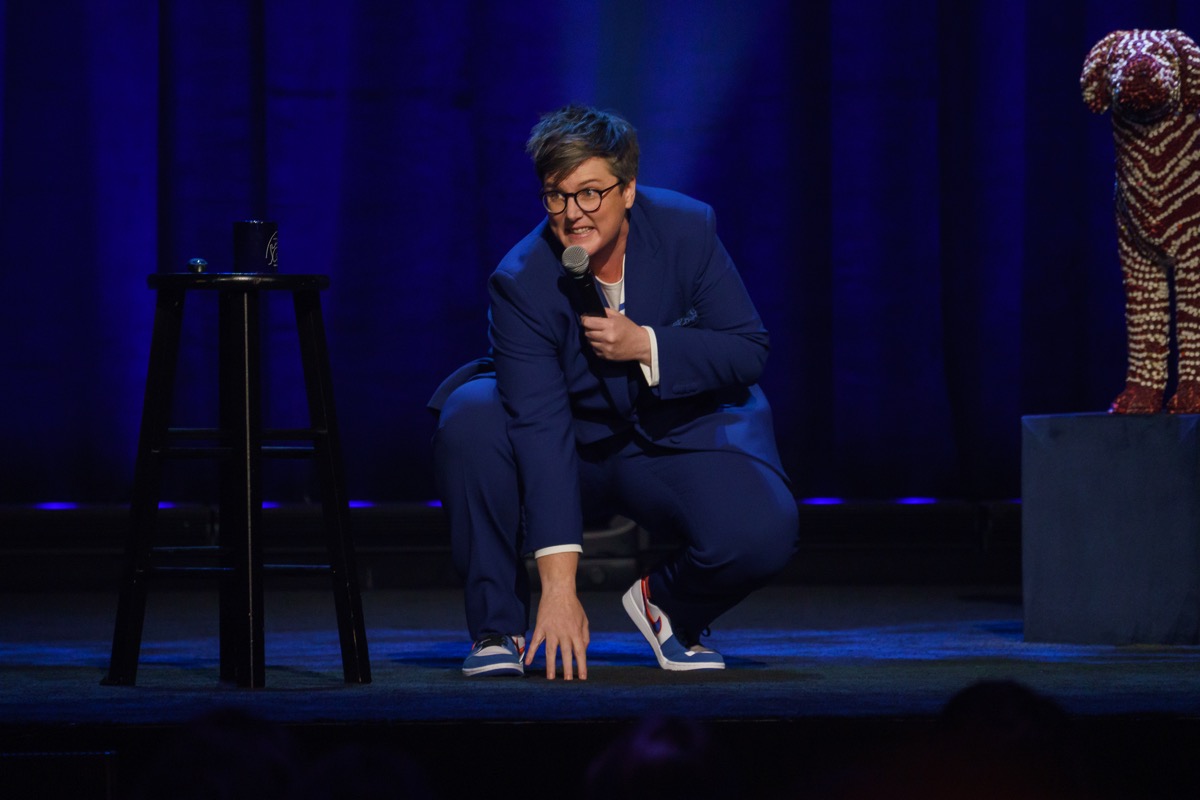 Douglas is Hannah Gadsby’s second Netflix comedy special and takes audiences through adventures in the dog park, the High Renaissance in art, and, most importantly, through frustration and rage.

In June 2018, Netflix unleashed Hannah Gadsby’s Nanette to its global audience, and viewers were immediately arrested by her genre-bending approach to comedy. The Australian comedian went beyond the expected norms of stand-up to deliver a more in-depth form of storytelling, using her very unique brand of humor to unpack trauma and tragedy and a lifetime of experience in a manner that was resilient, admirable, and hilarious.

Mel Brooks summed up the notion perfectly when he famously said, “Tragedy is what happens to me; comedy is what happens to you.” For Hannah Gadsby, her approach to tragedy is also her opportunity to explore, feel, and laugh. Comfortably settling into her global accolade, Gadsby explores a new side of emotion in Douglas. She responds to the lofty expectation that comes with success in no uncertain terms while delivering an exploration of that success that manifests in unexpected ways through her set.

It never gets old for a woman to be some damn unapologetic. In fact, not only does Gadsby open her special on an unapologetic note, but she goes straight for the throat by setting incredibly clear expectations. In the midst of poking fun at potential culture clashes between herself and her Los Angeles audience, Gadsby identifies herself within her breakout success by acknowledging that the audience now expects something from her, and that it is within her power to give it or not.

The prologue to the set is less about meeting expectations than it is about very cleverly laying out terms—the terms under which Gadsby rules herself and the space she now occupies.

The swagger and confidence of the set continues as Gadsby dismantles “mansplaining” with devastating accuracy and dagger-sharp wit. From benign but annoying encounters in the dog park to larger discussions over her personal health and how she was treated by male doctors, Gadsby hilariously recounts her personal experiences while also speaking to situations that are instantly recognizable for the overwhelming majority of women.

An extension of this section of the set is dedicated to how Gadsby has developed in response to her haters. It comes as no surprise that an outspoken, female, feminist, queer comic whose star is on the rise would attract the attention of those guys—you know the ones. In a refreshing turn, Gadsby relishes taking an engaging approach with her haters. Once again, she is tackling her fame and content on her own terms and twists the knife on her haters through unwavering optimism and humor. If you get nothing else out of Douglas, take it as a seminar on surviving as a woman on the internet.

If Nanette was a meditation on trauma, Douglas is a statement on pure, unadulterated female rage. Gadsby comfortably spends a lot of time within the emotion of anger, and it’s the most fascinating thing about her performance. She vents. She blows off steam. She describes “pufferfish moments” in which provocations slight and significant cause an instantaneous enraged reaction and a, well, puffed up response. There is nothing meek or apologetic or accommodating about Hannah Gadsby’s performance, and it is equal parts funny and inspiring.

Gadsby grounds the set in themes of perseverance as she discusses her diagnosis of autism. In the form we’ve come to appreciate from her shows, Gadsby once again links these very universal feelings of rage and frustration into something so deeply vulnerable and personal. It humanizes her, but does not diminish the strength of the set.

It feels limiting to speak on Gadsby and Douglas strictly within a feminine perspective, but I feel that’s important in this case. Historically, vulnerability is misconstrued as feminine weakness, and female rage is just as easily reduced. For Gadsby to deliver a masterful set that is genuinely engaging and funny, while also showing vulnerability and not balking at anger, is massive.

Douglas is not only a worthy successor to Nanette, but it raises the bar. Hannah Gadsby once again rewrites traditional expectations, firmly sets her own set of rules, and delivers a layered performance that exercises the mind and the heart—relentlessly ruthless, real and always funny.

Caitlin is a sweater enthusiast, film critic, and lean, mean writing machine based in Austin, TX. Her love of film began with being shown Rosemary’s Baby at a particularly impressionable age and she’s been hooked ever since. She loves a good bourbon and hates people who talk in movies. Caitlin has been writing since 2014 and you can find her work on Film Inquiry, The Financial Diet, Nightmarish Conjurings, and many others. Follow her on Twitter at @CaitDoes.