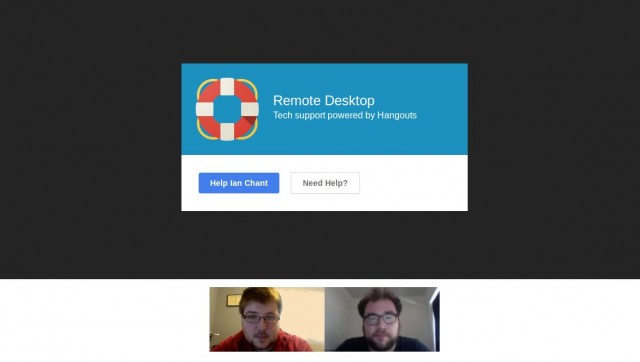 I’m willing to bet that a lot of our readers fall into the role of tech support for their friends and family. I know I do. Fixing your mom’s computer just got a little easier thanks to a new Google Hangouts remote desktop feature that lets you take control of another system through the chat service. The problem now is, how am I going to explain setting up a Google Hangout to my mother?

Getting started with Hangouts Remote Desktop is pretty basic. We just gave it a test drive, and everything went smoothly. The feature can be installed as an app in the hangout itself. It’s found under the “Add Apps” tab on the left of the screen. Once one person enables Remote Desktop, the other party can choose to accept or reject it. Now you’re free to click around the other person’s screen.

Assuming the person you’re trying to help is tech savvy enough to get to the point where they can accept your help through the Hangout, it’s a lot easier than trying to talk someone through whatever you’re helping them with over the phone. There are plenty of premium services that offer remote desktop functionality, but the obvious benefit to Hangouts Remote Desktop is that it’s free, and most people probably already have a Google account.

One feature still notably missing from Google Hangouts is the ability to record a hangout without also broadcasting it to YouTube. Just saying.

(Daniel Caiafa’s Google+ via The Verge)