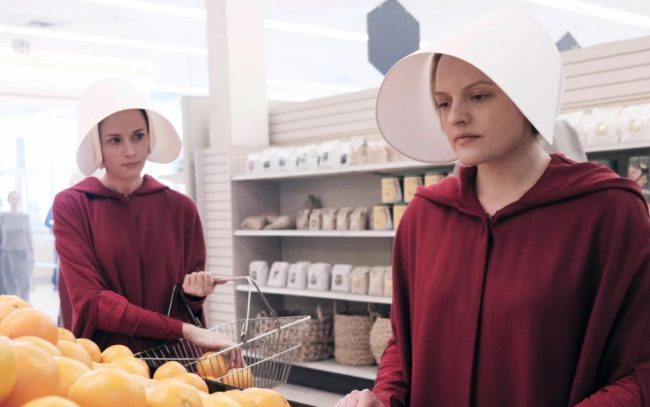 When the second season of Handmaid’s Tale was announced, we were beside ourselves with excitement. Still, there were questions. Namely, what would this new season entail? Would it create new plotlines or dive further into unexplored subplots from Margaret Atwood’s book? (Also, would it diversify its writing room and become less colorblind?)

When the Mary Sue staff discussed what we personally wanted to see from the book explored further in season two, my immediate answer was “Offred’s mother!”

In Atwood’s novel, Offred’s mother is a fascinating, complex character. If my memory is correct, Offred and Moira were indicated to be teenagers or young women around the time the book was written, in 1985. They fit in with the contemporary wave of feminism, while Offred’s mother represented the generation before them. And as a 1960s feminist watching her daughter and her peers treat their own liberties so casually and take the sacrifices of their predecessors for granted (and subsequently fall to our worst patriarchal nightmares), she was not silent in her anger and disappointment.

It’s now been announced that Cherry Jones will play Holly, June/Offred’s mother in the show’s second season on Hulu. We still don’t know what her role will be, if we’ll be seeing flashbacks or if she’ll resurface. In the novel, she had been sent to radiation-filled “Colonies” and presumed (but not certainly) dead.

Either way, in whatever form, I’m excited to see her character explored.

And I can’t think of anyone better for this role than Cherry Jones. She’s had a decades-long, Tony Award-winning theatre career, and co-starred in everything from M. Night Shyamalan movies to 24 to, just recently, Transparent, where she played a Ali’s sexually predatory, trans-exclusionary mentor. She has the perfect powerful, resonating voice to warn a daughter and her entire generation not to take their rights for granted. I’m imagining a powerful “I told you so moment.”