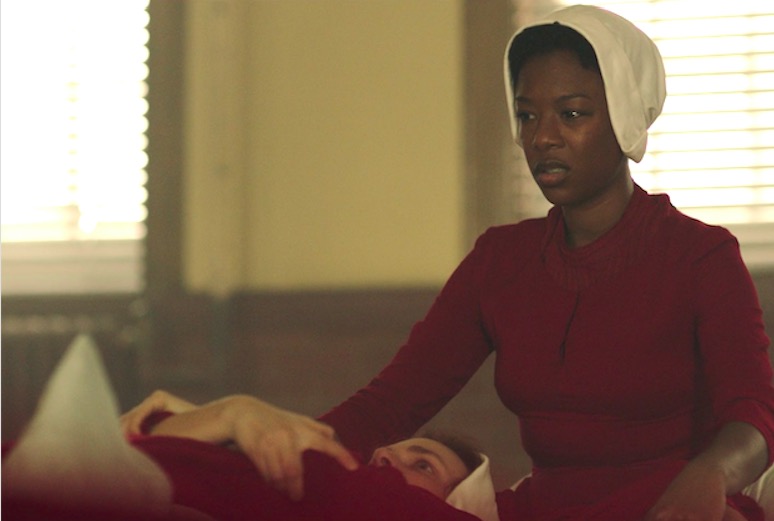 After criticism against the color blindness of Margaret Atwood’s dystopian world in Hulu’s The Handmaid’s Tale adaptation, showrunner Bruce Miller vowed to engage in a more nuanced treatment of women of color for season two, according to Inverse. Having heeded the conversations in social media, Miller declared, “We’re up for the challenge.”

With Sofia Coppola’s The Beguiled recently erasing the intersectional exploration of femininity through the excision of a black character in the source material and the original 1971 film, the call for intersectional dynamics in feminine-driven media has been loud and clear. Inverse stated that the Handmaid’s Tale writers’ room is “all-white,” which means Miller really needs to employ women of color to directly handle Atwood’s world and speak for their own experiences.

Intersectional consideration would also be an opportunity for Atwood, who will remain on board as a consultant for the Handmaid’s Tale’s second season. The upcoming season will expand beyond the canonical ending of her novel, to engage in the racial dynamics glossed over in her book. Notably, in her source material, black Americans—“Children of Ham” in the text—are offhandedly mentioned as deported to labor in the toxic Colonies, a fleeting commentary on the white supremacy of religious fundamentalism, but a severe dodge in exploring those issues. In “Get Out of Gilead,” Bitch Media writer Priya Nair noted that Atwood neglected to engage with the experiences of women of color through the restricted lens of her white heroine. Nair discerned Atwood’s literary application—appropriation—of slavery-era restrictions and iconography, such as the Underground Femaleroad, the outlawing of reading, and Handmaids themselves, like slave women for their masters, raped as procreating breeding-machines for Commanders and their Wives, injected into a white woman-centric experience.

Having the suffering of white women stand in for the atrocities faced by women of color has been the show’s biggest drawback. It does not help matters with the behind-the-scenes intent of one of the show’s most famous sequence, which is exclusive to this television adaptation: the aftermath of clitorectomy performed on supporting character Ofglen/Emily. Miller relied on the shock value of female genital mutilation conducted in the Western world of America—on a white woman—as opposed to its victims in the real world. As a result, a systematic real-life injustice committed against women of color was appropriated for fictional white women’s struggles.

Due to the concentration on a post-racial, “fertility trumps all [including racism]” dystopia, as set by Miller, the multi-ethnic casting of the Hulu’s Handmaid’s Tale proved blind in intersectional study, with Samira Wiley’s Moira relegated to a subordinate role to the white protagonist Elizabeth Moss’s Offred/June Osbourne. Bethonie Butler’s Washington Post piece chastised the show’s inability to explore the Osbournes’ experience as an interracial family and Moira’s existence in the margins of Offred’s narrative, especially considering how much the show deviated from its source material. This illuminates the writers’ grave error: the assumption that racial concerns do not intersect with those of femininity. By painting this “post-racial” dystopia, it depreciates the edge of realism that this show has been touted for in today’s world, where systemic racism is still a very real problem.

With Miller’s promise, there is space in the future to address these overlooked issues. The first season does plant viable material for the intersectional future of the Handmaid’s Tale. How does a Wife react when a Handmaid, assigned to give birth to her child, does not resemble her appearance—or align with her race? How would children of Gilead, such as June’s biracial daughter, process new parents that might not align with her race? How do Handmaids of color—as partially examined with the second Ofglen—process their station as sexual slaves? Even though upper-ranked Wives of color and Commanders can be spotted in the background, the ruling class majority of Gilead presented on-screen is still a very much a white-emphasized society.

The Handmaid’s Tale deserves voices that can best illuminates these concerns. These voices shouldn’t just come from critics, but should be present within the writers’ room.

Caroline Cao is a Houstonian Earthling surviving under the fickle weather of Texas. When not angsting over her first poetry manuscript or a pilot screenplay about space samurais, she enjoys acting in cheesy improv performances for BETA Theater, experimenting with ramen noodles, and hollering vocal flash fics on Instagram. She lends her snarky/scholarly mouth to Birth Movies Death and The Script Lab.

Come visit her blog and check out her no-nonsense writing and screenwriting services. She’s also lurking in the shadows waiting for you to follow her on Twitter or Tumblr and read her Star Wars fanfiction.