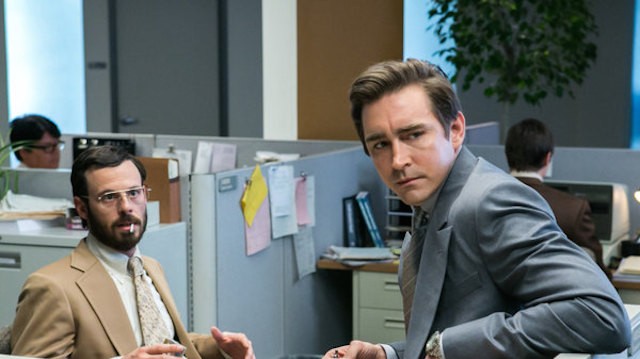 I’m so stressed out by the way this show is colliding towards its conclusion. Can’t handle it. This week, halfway through I thought, “Finally, we’re starting to get into a good place with at least half the characters on this show. But all that seems to have evaporated—just like Mutiny.” So it will be a tough one to relive, but let’s give it a try.

The episode starts pretty much right where the last one ended. Cameron is working away on the first person shooter game she and Tom are developing, with music blasting, and Donna is clearly still PO’d by her singular decision not to sell. Personally, I totally understand why Cameron didn’t want to go into business with Jacob Wheeler and Joe, but she should have been honest about the why—especially with Donna, who might not even know how valuable Community is right now.

Speaking of Joe, he did it! He actually got married to Sarah and is moving to Silicon Valley. And he seems honestly happy about the decision to pick Sarah over her father’s company. Mr. Wheeler is … not so happy. But he hides his real thoughts (and devious plans) well. With Joe leaving, Mr. Wheeler can cut out the middle man (Joe) in the online dealings. Ironically, Joe doesn’t even realize he’s the middle man. Joe is about to go on a month-long honeymoon (anyone else feel that seems surprisingly long?), and doesn’t even realize the person he’s left Mutiny in the hands of.

Credits over, and we’re a month later. Gordon’s business is booming, Donna’s Community is so popular they’re hosting an in-person party, and Cameron and Tom have finished their game. The only person not actually being productive professionally is Joe … and I get the sense he and Sarah were OK with taking a break. He returns to find a new Joe in Wheeler’s office: Jesse, the smarmiest of all the smarmy guys I’ve ever seen on this show. He seems like a real scumbag, and it turns out my first impressions were correct. Unfortunately, no one is aware of the danger ahead.

Gordon is working in the garage on his computer company, and things are starting to get a little sticky. His staff couldn’t afford to take the risk of leaving their job and left the company. Now computers are coming back with mistakes—the computers built by Gordon. Between that and his hallucinations, things seem to be getting much worse for Gordon and at a far faster speed than anyone could have planned. Stress is also a big factor, as we see when he answers the phone call from his daughters at camp and curses when he realizes someone had the same idea of building custom machines that he had. But he has to see Joe before he can talk to Donna, so he can go over the way he set up Wheeler’s company with the new guy, Jesse (seriously, dude: I really, really hate that guy).

Cameron and Tom finish up their game, and despite Tom’s resistance, she decides to copyright it. Honestly, I never thought of this issue at all, because I just assume a business would copyright the things they make. But it turns out, this was a debate, and if you replace computer technology with entertainment like film and movies, the debate over sharing data across a community vs protecting your intellectual creations is still raging. Tom and Cameron have both “stolen” technical information from companies before with dramatically different results. Tom got a girlfriend and cool job, Cameron got a bad relationship with Joe and shut out by Cardiff Electric. So the debate makes sense; Cameron is having trouble trusting, and Tom is trusting a bit too much.

But there are other issues to deal with in their relationship, and Tom is, like Donna, still a bit angry that Cameron told him she would sell after he told her about his childhood, and then made the decision not to sell with the “this is my company, and what I say is final” excuse. They fight, but almost immediately, Cameron asks if they are breaking up, which leads to Tom’s genuinely befuddled look of “haven’t you ever fought with someone before.” Cameron has had a lot of fights, but Tom is right that she tends to shut down when an actual debate starts, and ultimately wants to run away rather than work things out. She does it with Donna a lot. Tom won’t let her, and they go to the party with the pretty heavy weight of the fight still on their shoulders.

I should say, I love episodes of TV that take place in a pretty concentrated time period, like a single day (or even the actual hour it takes place), so I was predisposed to like this episode when I realized it was pretty much just focusing on party day. Donna’s party starts to come together, and she’s lit up by the idea that she’s created love matches and real friendships online. Even Liv comes, now on crutches, and I was delighted to hear him say he wanted to meet people from Community. It seems like a smart way of coping with the trauma from last episode. Donna’s practically dragging Cameron outside, who wants to bury her head in the sand over Community’s success superseding the games. But she can’t when she makes a speech and realizes almost none of the people at the party, staying on for a long time and being loyal customers, are actually playing. What she does realize is that there are girls like her (or her as a kid) who are benefitting from a place like Community, in one of the sweetest moments on the show, when Cameron is thanked for starting Mutiny.

One thing genius Cameron can’t do, it seems, is hug. She is a terrible hugger. We see that with this teenage girl, and we see it with Tom, who confirms he said he loves Cameron during their fight, but that doesn’t mean he didn’t mean it. Cameron, despite knowing she loves him, can’t say it back, and Tom seems to know she can’t get the words out, but it clearly still hurts him that she’s so closed off, even with him.

There are a lot of intimate get togethers at the picnic. Bos and his son are hanging out, and if there’s one person who seems proudest of all Mutiny has overcome, it’s Bos. He loves the kids he works with. He’s clearly helping Donna and Cameron navigate the corporate world, and proving he isn’t just an old convict. Bos (and Toby Huss’s performance) is so charming and sweet this episode with his son who he parades around Mutiny with pride over the company and showing his son what they’ve done in a relatively short time. His son offers to put a good word in for him at a bigger company, and Bos seems a little resistant to the idea of leaving.

Unfortunately, killjoy Gordon can’t integrate himself so well into the picnic, as he crashes Donna’s good time tell her about the ad he found of the other company. Stan is back from California, and Gordon thinks he is the one behind all this. So what does he do? Breaks into his garage to search for evidence. Seems to me that he’s starting to lose it, because what’s he going to do with the proof? He doesn’t own the patent on personalized computer building. But Stan didn’t betray Gordon, he just couldn’t compete with the younger programmers and came back home and is doing repairs on computers to make a living. But just before Gordon gets arrested for breaking in, Stan mentions that Donna asked his staff to let her know if he was doing okay, which raised questions among them about his ability to manage a company. Great, now Gordon is suspicious of Donna!

While Donna and Gordon’s relationship starts to bust apart, and Cameron and Tom start to establish theirs, Joe and Sarah hit the town for one last night in Dallas … with drugs, of course. Looking their ’80s best, they’re dancing at a night club and end up on a couch where Joe explains his great, lifelong frustrations; he sees where technology is heading, but he doesn’t have the ability to build the things that will be the future. He isn’t a designer or programmer or hacker; he’s the salesman and visionary that depends on their tangible contributions. It’s one of the best speeches Joe’s ever given—because it feels honest. … Then Sarah and Joe start making out with another couple.

Instead of having … relations with the other couple, however, they go to Wheeler’s company to have sex in the brain center (I didn’t expect that). As she is sneaking out, Joe is waiting to make his move (not wanting Sarah to get caught by her father and the embarrassment that will come with that), and sees IT. Jesse (that scumbag!), with the help of other programmers, built a mirror site of mutiny and are hacking in from the server. Now users who think they’re going to Mutiny are being sent to West.Net (which they assume is just a new name). Everyone has been locked out, and they can’t get Mutiny back online until they find another server. And even then, how will they even inform all their users of this change?

Line of the Week: Donna’s “it’s about time we got out of the Joe McMillian business.” No truer line has ever been spoken.