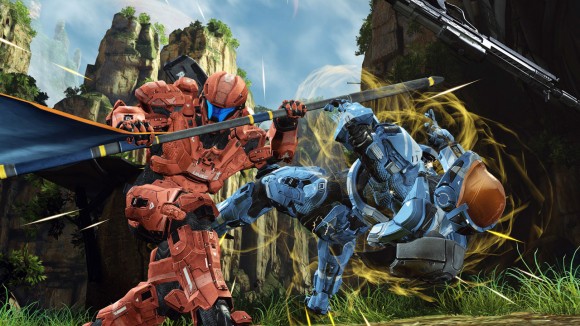 Start a discussion about harassment in games, and two words are bound to come up: Xbox and Halo. Seeing as how the latter is one of the most successful game franchises ever, which runs on one of the world’s most popular consoles, this perhaps has to do less with the game itself and more with the fact that it represents a huge chunk of the gaming community. Heated competition undoubtedly plays a part as well, but whatever the reason for it, if you want to show someone just how bad things can get in multiplayer gaming, Halo’s the poster child.

Which is why it was a pretty big deal earlier this week when Gamespot published an interview with Kiki Wolfkill, executive producer of Halo 4, and Bonnie Ross, head of Microsoft subsidiary 343 Industries (the game’s developer). With Halo 4 poised for launch next Tuesday, they had a message for their players: Sexist language on Xbox Live will get you a permaban.

Ross and Wolfkill said there is zero tolerance for Xbox Live players who are found to be making sexist or discriminatory comments against others, with a lifetime ban from the network as penalty.

“I’ve seen many of the sites that have documented some of the more gender-specific slanderous comments,” Ross said.

“This is behaviour that is offensive and completely unacceptable. I’d like to think most of our Xbox Live players don’t support this kind of behaviour.”

“It can be dangerous to give adolescents a broadcast mechanism,” Wolfkill added. “There are always going to be jerks out there, and if you give them a way to express that side of their personality without being seen, you’re going to see this type of behaviour manifest itself.”

Ross and Wolfkill said that developers have a responsibility to stamp out this behaviour by putting more thought into how their games will be perceived…Part of this responsibility includes changing perspectives about the games industry as an exclusively male-dominated area.

It’s hard to understate how noteworthy this is. Xbox Live is a cornerstone of the gaming community, and Halo 4 is…Halo 4. Games don’t get much bigger than that. To have two head honchos — both women, no less — lay down the law a week before launch is a powerful statement. Microsoft is a juggernaut, one of the industry’s “Big Three” (Sony and Nintendo complete the trifecta). Their actions and policies have influence well beyond the boundaries of the Xbox platform. To see this kind of move in conjunction with Halo means that even the top dogs are taking harassment seriously, and I wouldn’t be surprised to see others follow their lead.

During my formative years, I was all too aware of how hostile multiplayer games could be toward female players. For a long while, I saw that as an unchangeable reality. Developers didn’t seem to notice the issue and the gaming community at large didn’t talk about it. It wasn’t until college that I worked up the courage to play with others and tell them who I was, and even then, the climate wasn’t overly welcoming. To see one of the heavyweights stand up and say this is not okay is, for me, not only an encouraging mark of how things have changed, but also a sign of good things to come.

Ross and Wolfkill’s statement has, inevitably, kicked up several points of debate. Some have grabbed pitchforks and are shouting “free speech!” — which rather misses the point. Xbox Live is a privately-owned service, not a government entity. In principle, a public multiplayer game is no different than any service-based business out in the real world. I used to tend bar, a job which has more than a few traits in common with a game moderator. My bar was not a democracy, and my job was not to ensure the happiness of every individual I poured drinks for. I was there to provide a enjoyable environment for a large group of people. If someone was harassing other customers or doing anything to make the atmosphere less pleasant for everyone else, out they went. No questions, and I would’ve laughed if they asked for their money back. What Xbox Live is doing is no different. Their job is to entertain as many people as possible, and thankfully, verbal abuse is not something the majority of gamers enjoy listening to. Folks have every right to disagree with user policies, but in the end, it’s Xbox Live’s house, and they can make whatever rules they like (and yes, I’d feel the same even if they had a “no girls allowed” policy — but you can bet I’d say something about it).

As for the interview itself, some seem to be operating within the understanding that sexism is the only type of bad behavior that will be treated this strictly. To my understanding, while the interview is focused on sexism, the policy they describe is wider reaching. I assume that “discriminatory comments” covers racism, homophobia, and other identity-based insults (and if it doesn’t, it absolutely should). I didn’t get the sense that sexism was brought up because Xbox Live sees it as the only behavioral problem, or that it’s more important than other forms of discrimination. It’s just a specific topic these two women wanted to focus on (similar to when some Xbox Live team members made a video in support of GaymerCon). As you may guess, given the purview of The Mary Sue, that’s an impulse I understand. Even so, I think it’d be great to see a comparable statement making it clear that Xbox Live does not tolerate anything that falls under the discriminatory comment umbrella.

Riot Games says that its Tribunal system, which fields reports of negative player behavior, and metes out warnings and bans, is just as important in combating negativity. It’s important that players get feedback on how they behave online, which is reflected in Reform Cards that document chatlogs and team scores from player reports.

“When Reform Cards went live,” Lin says “I actually got an email from a 10-year-old boy who said ‘Dr. Lyte, this is the first time somebody has told me that I can’t say that word online. I’m really sorry and I’ll never do it again.’ I showed that to the team and I said ‘Can you guys see the difference you’re making in peoples’ lives? This is not about games anymore, you guys are impacting these players .”

After thinking of this, I’m curious to see how the policy Ross and Wolfkill mentioned will actually manifest (the only form of discrimination Xbox Live’s Code of Conduct currently lists as grounds for permanent suspension is “severe racial remarks”). “Zero tolerance” sounds an awful lot like “instant permaban,” which, while sometimes appropriate (again, rape and murder), may not necessarily be the best long-term solution in all cases. There will always be jerks in the mix, and no policies, no matter how strict, will get them to change their ways. Those people should be shown the door, no question. My thinking is focused on people like the young LoL player described above. There are many players who take part in discriminatory behavior not out of malice, but out of trying to fit in — and no, they’re not all kids, either. Plenty of adults follow the crowd, too. That doesn’t excuse their behavior, not by a long shot, but an instant permaban doesn’t give them an opportunity to change. I’m reminded of the interview I conducted back in July with Sam Killermann, the guy behind the Gamers Against Bigotry project. He, too, described experiences with players who simply needed a wake-up call.

About a dozen of the pledgees have contacted me saying things like “I never realized doing this actually hurt people,” or “I just thought it was part of the culture, so I played along” and ended their messages with “but I’m going to try to stop now.”

I’m envisioning two scenarios involving an Xbox player such as this. In the first, said player has his (or her — ladies can be jerks, too) account locked out without warning. He’s understandably pissed about it, and since he hasn’t learned anything from the experience, he’ll probably continue that behavior on whatever platform he migrates to. On the other hand, if the player is given a one-time warning that clearly states what he did wrong and why it’s not cool, he might have a change of heart — or at the very least, mind his manners in the future. Personally, I think the possibility of welcoming folks like that back into the fold is worth creating a buffer zone.

So while I’m hugely in favor of Xbox Live coming down hard on sexism (and ideally other forms of discrimination as well), I’m hoping that this policy is implemented in such a way that fosters a better community, rather than just kicking bad behavior out the door and letting it take root elsewhere. But regardless of the particulars, I applaud the Halo 4 team for the message at the heart of it all: Women make these games, women play these games, and this is our community, too.

More importantly, though — Kiki Wolfkill? Everyone go home. We’ve found the greatest name in the world.