Could This Have Been the Story for Half-Life 2: Episode 3? 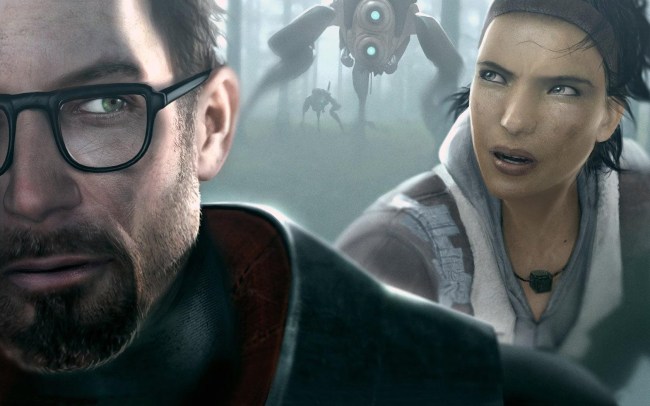 Marc Laidlaw, formerly lead writer at Valve (where Half-Life 2: Episode 3 is being held hostage), posted what he’s calling a fanfic to his blog, wherein he shares the story of one “Gertrude Fremont, Ph.D.” It doesn’t take a genius to extrapolate the name of one very famous video game character from that moniker: Gordon Freeman, Ph.D, a.k.a. the protagonist of the much-beloved Half-Life video games.

What’s funny is that other names are similarly genderswapped and distorted. Alyx becomes Alex, G-Man becomes Mrs. X, and so forth and so on. The post’s title is even “Epistle 3,” which is a play on “Episode 3,” which fans have been patiently (and sometimes not so patiently) waiting for since 2007, when Half-Life 2: Episode 2 first premiered.

One fan translated the post, porting it over to use some names and terms that might prove to be more familiar to you and I. So the story is told as a letter from Gordon, where he describes how he and Alyx go in search of the Borealis, a ship that the now-deceased Dr. Eli Vance warned the Resistance about. It’s also worth mentioning that this ship is referenced in Portal 2, and the Aperture Laboratory name also gets a mention in this story. Eventually Gordon and Alyx find the Borealis, which is constantly phasing through time, and find Dr. Judith Mossman, who tries to urge Gordon and Alyx to bring the ship back to the Resistance to find out its secrets. But Alyx made a promise to her father, Dr. Vance, that she’d destroy the ship. They argue, and Alyx shoots Dr. Mossman—whether it’s accidental or not isn’t made clear.

But Alyx basically gets her way, and along with Gordon, she sets the ship to crash land at the heart of the Combine’s operations on Earth, potentially ending the alien conflict once and for all. As the ship hurtles towards the center, Gordon catches visions of just how wide and far-flung the Combine’s reach really is, and realizes that their attack might not do much in the long run.

Most intriguingly, however, he also watches as G-Man, the enigmatic suited character who more or less presides over all the major events that happen in the Half-Life world, appears to Alyx, guiding her away from Gordon and the crashing Borealis. It’s similar to how G-Man would appear and guide Gordon away from other imminent dangers, only this time, he’s not there to save him. Gordon watches as Alyx leaves him behind, and just as he’s about to crash and die, he’s plucked from the Borealis by the Vortigaunts, who have (again, just like in the past) used their powers to teleport Gordon away from harm.

It’s a somewhat short read, but going through it, it’s easy to imagine just how the game would have played out. Obviously there’s no confirming one way or another that this would have been the actual Episode 3 script if Laidlaw had remained at Valve, but given that this is from the hand of the man who helped build the Half-Life series, it’s totally reasonable to think that this is maybe a shade of what could have been.

News about the forthcoming sequel has been scarce, with many fans giving up hope for Half-Life 2: Episode 3‘s release. So, I think folks can be forgiven for jumping on this story and holding on to it, since it’s the closest shot they’ll get to knowing what becomes of their favorite characters.