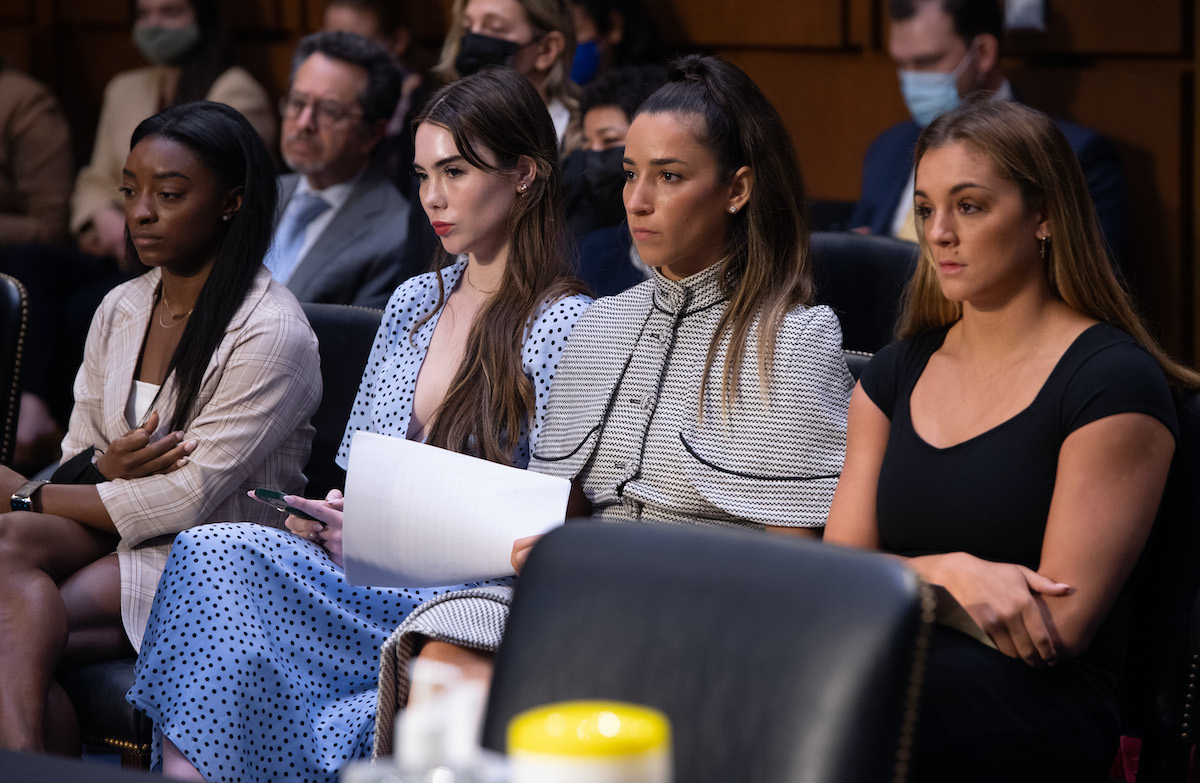 Four elite U.S. gymnasts testified before Congress Wednesday in regard to the abuse they experienced by former USA Gymnastics doctor Larry Nassar. Nassar was sentenced to a combined total of up to 235 years in prison after being convicted on state and federal charges of child pornography and criminal sexual conduct after more than 150 of his former patients showed up in court to address their abuser directly with victim impact statements.

This week, Simone Biles, McKayla Maroney, Maggie Nichols, and Aly Raisman spoke to Congress not just about Nassar’s abuse, but the role the FBI played what would essentially amount to covering it up and protecting Nassar.

“I believe without a doubt that the circumstances that led to my abuse and allowed it to continue are directly the result of the fact that the organizations created by Congress to oversee and protect me as an athlete, USA Gymnastics and the United States Olympic & Paralympic Committee, failed to do their jobs,” Biles said through tears. “To be clear, I blame Larry Nassar and I also blame an entire system that enabled and perpetrated his abuse.”

Nassar wasn’t convicted until 2018, but the women say they were communicating with the FBI and sharing their stories as early as 2015, and Nassar’s patterns of abuse were allegedly known even before that. “USA Gymnastics and the United States Olympic & Paralympic Committee knew that I was abused by their official team doctor long before I was ever made aware of their knowledge,” Biles told the Senate Judiciary Committee.

The women all described speaking with the FBI on numerous occasions, describing the abuse they’d suffered by Nassar. What the FBI then did with that information, Maroney calls “incredibly disturbing and illegal.”

Maroney says that after speaking with her and hearing her “entire story of abuse” in 2015, the FBI did not document her report for nearly a year and a half. And when they did, she says they twisted her story and “made entirely false claims about what I said.”

“After reading the Office of Inspector General’s OIG report, I was shocked and deeply disappointed at this narrative they chose to fabricate,” she says. “They chose to lie about what I said and protect a serial child molester rather than protect not only me but countless others.”

She recalled sitting on her bedroom floor for three hours, speaking with the FBI over the phone because she couldn’t bring herself to discuss her experience in person, describing the molestations she experienced in “extreme detail.” When she finished, she says she was met by “dead silence” from the agent on the other end of the phone.

“After that minute of silence, he asked, ‘Is that all?’ Those words in itself was one of the worst moments of this entire process for me. To have my abuse be minimized and disregarded by the people who were supposed to protect me, just to feel like my abuse was not enough,” Maroney said.

“But the truth is my abuse was enough and they wanted to cover it up,” she continued. “USA Gymnastics in concert with the FBI and the Olympic Committee were working together to conceal that Larry Nassar was a predator.”

There is evidence even beyond these brave women’s testimony to suggest that the FBI engaged in a deliberate cover-up of Nassar’s abusive behavior. A watchdog report from July found that the FBI mishandled the allegations that had then been made against Nassar through a repeated failure to act on the information they had gathered, as well as what appeared to be deliberate efforts to hide that information in order to facilitate a job opportunity for one top FBI agent.

There’s some very troubling information in this watchdog report that says [Jay] Abbott, who was in charge of the Indianapolis office of the bureau at the time, was also in talks for a big job with the U.S. Olympic Committee as chief security officer. After his Indiana office decided to take no action but while this Nassar investigation was still live within the FBI, he met with the gymnastics CEO for beers. They discussed public relations strategy about this investigation.

The women speaking to Congress this week were furious and demanded action–specifically, they want to see indictments for the FBI agents who ignored them and manipulated their stories. They also want the officials inside USA Gymnastics and the US Olympic & Paralympic Committee who knew of Nassar’s abuse and allowed it to continue to be held accountable.

“My reports of abuse were not only buried by USAG, USOPC, but they were also mishandled by federal law enforcement officers who failed to follow their most basic duties,” Aly Raisman said during her testimony. “The FBI and others within both USAG and USOPC knew that Nassar molested children and did nothing to restrict his access. Steve Penny and any USAG employee could have walked a few steps to file a report with the Indiana Child Protective Services, since they shared the same building.”

“Instead they quietly allowed Nassar to slip out the side door, knowingly allowing him to continue his work at MSU, Sparrow Hospital, a USAG club, and even run for school board. Nassar found more than 100 new victims to molest, it was like serving innocent children up to a pedophile on a silver platter,” she continued. “Why did none of these organizations warn anyone? USAG and USOPC have a long history of enabling abuse by turning a blind eye.”

Let’s be honest. By not taking immediate action from my report, they allowed a child molester to go free for more than a year. And this inaction directly allowed Nassar’s abuse to continue. What is the point of reporting abuse if our own FBI agents are going to take it upon themselves to bury that report in a drawer? They had legal, legitimate evidence of child abuse and did nothing. If they’re not going to protect me, I want to know, who are they trying to protect? What’s even more upsetting to me is that we know that these FBI agents have committed an obvious crime. They falsified my statement and that is illegal in itself, yet no recourse has been taken against them. The Department of Justice refuse to prosecute these individuals. Why?

“To not indict these agents is a disservice to me and my teammates,” she continued. “It is a disservice to the system which was built to protect all of us from abuse. It was a disservice to every victim who suffered needlessly at the hands of Larry Nassar after I spoke up. Why are public servants, whose job is to protect, getting away with this? This is not justice. Enough is enough. Today, I ask you all to hear my voice. I ask you, please do all that is in your power to ensure that these individuals are held responsible and accountable for ignoring my initial report, for lying about my initial report, and for covering up for a child molester.”

You can watch the full hearing here or read a transcript here.

If you’re experiencing or have experienced sexual violence, the National Sexual Assault Telephone Hotline connects you with RAINN affiliate organizations in your area: 1-800-656-HOPE (4673). You can also Viviansit RAINN website, which has information and a live chat function.