Think You Can Write About RPGs For Gygax Magazine? Here’s How To Prove It 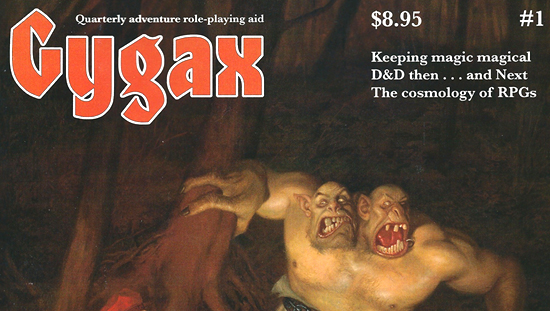 How many hit points does an ettin have? About 65 (in 3rd Edition) or 222 (in 4th), but the one on the cover of the first issue of Gygax magazine doesn’t much care. He’s system-neutral. If you’re a gamer or fan of RPGs, you may have heard of this new magazine meant for gamers of all stripes — and the spiritual successor to Kobold Quarterly. The first issue Gygax launched last month, went digital just over a week ago, but now the Gygax magazine website has relaunched with new info and submission guidelines. If you think you’ve got the chops to write about gaming for gamers, it may be time to prove it and holler at them.

Gygax is meant to appeal to fans of all kinds of games, from board games to war games to RPGs, and it’s not subscribing to any particular version of Dungeons & Dragons. For example, the first issue includes new monster lore (“Ecology of the Banshee”), parenting for gamers (“DMing For Your Toddler”), and ways to screw with fantasy games (“Playing it the Science Fiction Way”).

If you’re a writer or game designer or an artist, this could be an excellent place to get in early. With the relaunch of GygaxMagazine.com, you can contact them directly using the simple guidelines as your reference. They’re taking “material related to role-playing games, board games, wargaming, and miniatures,” though at this time they’re not interested in short stories or poetry. If you’re not sure your gaming ideas are a fit, just snag issue #1 for yourself and see what they’ve started.

The fact that Gygax is a print magazine — digital is available for those who prefer it — is kind of a big deal. When Wizards of the Coast yanked the license for both Dragon and Dungeon magazines from Paizo Publishing, then went only digital with it, the gaming community mourned the loss. It’s hard to replace the satisfaction of flipping through a physical magazine chock-full with D&D gooness. Kobold Quarterly helped pick up the slack for a few years before folding last fall, leaving a critical hit scale hole in our collective hearts.

The name Gygax will be a familiar one to veteran Dungeons & Dragons players — E. Gary Gygax was the co-creator of D&D itself, and  his sons Luke and Ernie Gygax are at the helm of the new quarterly magazine. Editor-in-chief Jayson Elliot is also the owner of the “new” TSR.

In the interests of full disclosure, I must confess that I have some bias in talking about Gygax. The big unboxing of issue #1 was a live-streaming event hosted at the Brooklyn Strategist, the “Best Game Store in NYC” (Village Voice) where I was working. And I just might be in cohoots with Elliot in future projects. Also, I snapped some photos of the event. 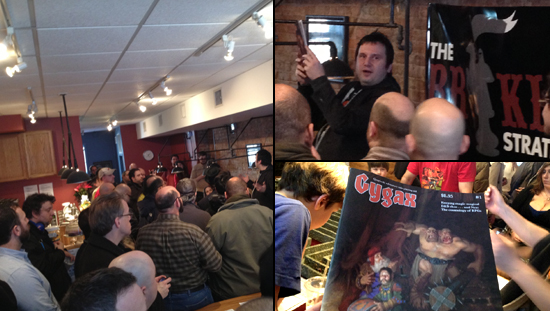 One or two people were in attendance.

When Gygax was first announced, Elliot told Wired about those involved:

“I wanted someone who was around at the beginning. I wanted someone to guide me. The most obvious choice was to choose Tim Kask, the founder of Dragon magazine. I’m really excited about the cast of characters we’ve been able to assemble, a mix of the old and new. Names people will recognize from the old days.”

At this early stage, the magazine must speak for itself. Reviews are popping up all around, from here and here to here, but most agree that this new mag is a promising start. It definitely gets back to basics — back to the core of gaming that makes geeks of us all — and offers more than a few doses of nostalgia.