Gwendoline Christie’s Panel at ACE Comic Con Was the Most Feminist, Fabulous Panel Ever

Plus: what’s next for the queen of swords. 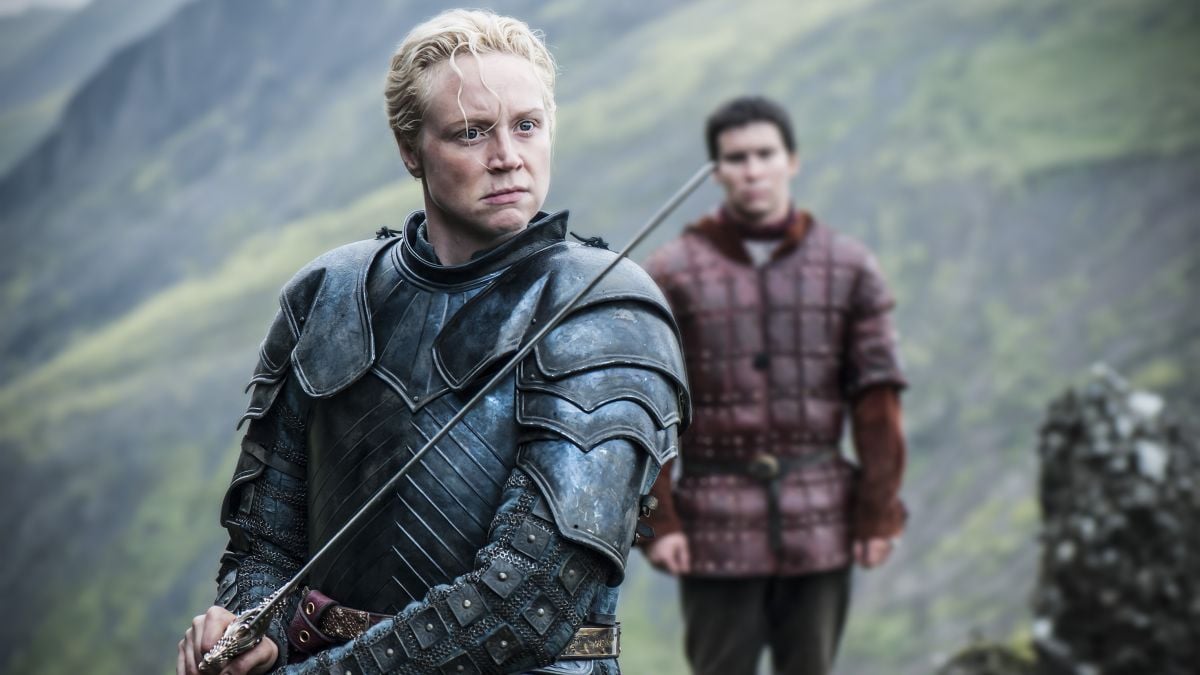 Gwendoline Christie took to the stage for ACE Comic Con Midwest’s first panel this past Saturday and spent the next forty minutes gracing us with her delightful, inspirational presence as she discussed Game of Thrones’ Brienne of Tarth, Star Wars’ Captain Phasma, and how she finds her joy in bringing nontraditional female characters to life.

It isn’t often that reality lives up to the hype, but I have rarely seen a more feminist, fun, and enthusiastically genuine celebrity panel at a convention. Christie proved yet again that she is tapped into what is important to women and fans in general, as she championed diversity in storytelling, trans rights, and perhaps gave us a big hint as to one of her next projects.

Alongside host Angelique Roche (correctly introducing Christie as one of the “biggest badasses” around), these two fab women dove right into the significance of a character like Brienne of Tarth, with Christie noting that “because of what we’ve been fed in mainstream media, a diet of media from a very particular—and I’m going to say it—patriarchal perspective, we haven’t had a lot of diversity. We hadn’t heard a variety of women’s stories.” Christie went on to say that her “absolute state of bliss” is “to be in service of an idea greater than myself … whether it’s changing perceptions about how women look or being a badass with a sword.”

In seeing Brienne just as physically strong and imposing, if not stronger than nearly every other character in the vast cast that makes up Game of Thrones, wielding an incredible sword—which Christie wishes she had stolen from the set!—in a way that is traditionally coded as masculine, we get a refreshing, barrier-shattering character imbued with everything Christie hoped to bring to the role and more.

Brienne on the page can only take you so far, but to see her embodied in the warrior-goddess vibe that Christie brings to everything she does is still something new for our jaded fan culture in the year of our lord 2019. The same goes for Captain Phasma in her gender neutral armor, or in seeing Christie portraying Queen Titania in A Midsummer Night’s Dream as she did in the West End this past summer—but also having the twist of Titania saying King Oberon’s lines. Gender-swapped lines in Shakespeare, played by my girl Gwendoline Christie? Be still my masters-in-literature, feminist-studies heart!

Of particular import to me, a fellow tall woman who spent far too long trying to fit myself into the smaller spaces that society has deemed acceptable for women to embody, hearing Christie’s response when Roche asked what she would say to women “who are out there and may not have found that confidence of voice just yet, and may still be shrinking, may not have found their confidence for size, for height, for race, for ethnicity, for religion?” was not only cathartic, but emotionally moving.

Sometimes you don’t really realize just how much it hurts to keep folding yourself down into something smaller and less authentic until you break free of that pattern. Christie said that “we need to see a realistic depiction of our world, because people can only really respond to what they’re given, and if we’re fed one thing, how can you be expected to gather a strength if you identify with something outside of that?” Thankfully, Christie’s persistence in how she got into acting and kept working so incredibly hard at her craft means that we are finally getting a tiny bit more representation in terms women who don’t fit the typical Hollywood mold.

Tied into this answer about finding confidence in yourself no matter what makes you different from the norm, Christie took the opportunity to discuss trans rights and the recent demonstrations we’ve seen—congratulating “brilliant” activist Justin Vivian Bond in particular—and she eloquently brought us her thoughts on the subject, with the following epic quote:

We need to have a wider representation of the people in our world, and it is really hard if you are fed something that says, “You’re not included.” I don’t really know what the answer is, but I do know that sometimes, no matter how big or how small it is, you have to make a leap of faith. You have to say, “It doesn’t matter if no one believes in me. I think that this is right,” and then slowly, perhaps, other people start to respond to that, and an idea can gather steam and that can help to change the world.

I know that sounds idealistic, but it’s true. It takes a deep breath and a moment of courage to say, “I am relevant. I deserve to exist. I exist, and therefore, I deserve my place in the world.” And to carry that forward … I don’t have any answers, but the only thing I can say is that it’s about taking that breath and taking that step. And I know it is so hard. I know how cripplingly hard and difficult it is, but it can literally start with the smallest thing … even something as simple as just lifting up your eyes, meeting someone else’s eyes, and saying hello. It can feel really difficult and challenging, but if you can start there, who knows what you can possibly achieve?

Can Gwen be my personal self-esteem coach? Scratch that, she now IS my personal self-esteem coach. I’m plastering this quote on my mirror. To be quite honest, what she said is exactly what I’ve personally needed to hear for a while now. As a feminist writer and panel host (and a geek woman with opinions on the internet), I’ve had a bit of a slog in terms of bringing feminist-focused content to the geek space and in legitimizing myself in the eyes of the men who still dominate said space. It gets tiring, but it’s getting better. Hearing words of encouragement like this is utterly necessary.

Christie also noted the importance of her drama school education, and that her school (Drama Centre London) took people from all different backgrounds, as well as people who perhaps could not afford to attend drama school otherwise. She credits her success to the rigors of that program, to Declan Donnellan and her first job at the Royal Shakespeare Company, and the effort it takes—she wasn’t handed anything, and most people are not. Privilege is, of course, real, and many prominent people benefit, but Christie championed not only her own hard work (brag about yourselves, ladies! No one else is going to do it for you!) but the people who gave her a chance to shine:

I’m no expert, but it takes constant effort. That can be exhausting, but if you want to create, I think that’s what you have to do—truly, truly believe. I never expected anyone to give me a job, but I was going to keep trying until I found my people. You know what it’s like if you are told “no” constantly; you can start to believe it, particularly when you don’t see representations of yourself around you in the world, in the media, in your entertainment. So, I think it’s true that confidence comes from being given a chance, and I am hugely lucky that some people have given me a chance.

The role of Brienne clearly catapulted Christie into the stratosphere, paving the way for Star Wars and what is sure to be a long and stellar career of shattering ceilings and kicking ass. In discussing Brienne’s final story arc, Gwen gleefully noted that Brienne got the promotion she’d always dreamed of (as both a knight and lord commander of the Kingsguard), and she was still alive—a huge feat in a show that killed off characters left and right. Also, you haven’t lived until you’ve heard her yelling, “SEXUAL EXPERIENCES!!!” to a room of several thousand people as we all took great joy in Brienne and Jaime Lannister’s consummated relationship.

Christie also called Brienne “a woman outside the patriarchy that lives life on her own terms, doing what she can to excel in her chosen field” when Roche mentioned how amazing it is that Christie nominated herself for an Emmy and received the nomination for such a character. The room went wild when Christie said that she only ever wanted to do Brienne’s story justice, which is why she put herself forward for the Emmy when HBO did not. “People have told me they’ve been inspired by it. Genuinely, that is the greatest thing. If you can inspire someone to take action for their own lives, for something that they believe in, then you have done something of your job.”

How great is it that she sees inspiring people as her job and takes that task seriously? She certainly doesn’t have to approach things in that way. In a business where actors can come off as disinterested or dismissive of fans, Christie demonstrated at this panel that she fully embraces her role and strives to be fully conscious of how her actions can inspire. I also heard it echoed in fans’ interactions with her over the course of the weekend—how well she treated her fans and how inspired we all felt by her presence. Many thanks to ACE for bringing her to this event and to Christie for her enthusiasm.

Oh my. What is this project? Can I be in it? I absolutely cannot wait to see what Gwen brings us in the coming months and years, with what is sure to be an epic team of feminist minds. There is clearly much to look forward to from Gwendoline Christie. In the meantime, can we be best friends and go tall-girl shopping and destroy the patriarchy together? Call me!

In all seriousness, it’s thrilling to consider that this perfect storm of events—people demanding greater representation in media, Christie’s tenacity and presence in pop culture, and the subsequent seeking out and hiring of feminist writers, directors, producers, and more—will result in a whole new pantheon of feminist media for our consumption and enjoyment. I, for one, cannot wait. Bring it on.

Amy Imhoff is a freelance writer and talent manager who left the cubicle life to launch Amy Imhoff Management, helping individuals and small businesses live their best digital lives. Amy specializes in genre fandom, pop culture, and feminist issues. She is a featured author and convention panel host, with over 100 articles and 60 panels under her belt. Amy wears many hats in the writing and marketing world, from literature professor to branding expert. She loves to travel, enjoys all things British, and wants to save the planet while wearing cute shoes. Amy is based outside NYC, where she lives with her husband and two silly cats. Find her on Twitter and Instagram @lightstar1013 and work with her at www.amyimhoff.com.