He is a light in dark places. 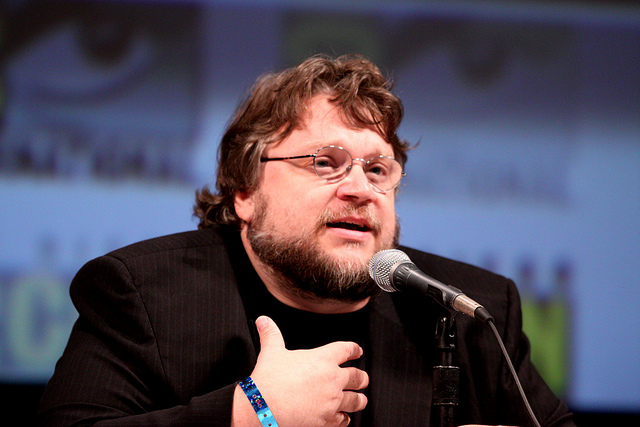 Things we know about Guillermo del Toro: He’s persistent, as evidenced by the fact that he’s still determined to make his Justice League Dark. He’s probably not the hugest fan of Twilight, judging by his take on vampire movies. And he is pure of spirit and destined for a front-row seat in heaven, because he used the phrase “never peeled my banana.”

But first, Dark Universe. Del Toro has been developing the movie—which will focus on magic-oriented DC characters like Swamp Thing, Constantine, and Zatanna—for over a year now, with no signs of it actually getting closer to production. In that time he’s put in time on other projects, like Pacific Rim 2, Crimson Peak, and TV show The Strain, and some of DC’s magical characters—John Constantine and the Sandman crew, specifically—have their own projects. What does this mean for del Toro’s movie? He to SuperHeroHype:

“I’m still working on it. Sandman doesn’t figure in the Dark Universe. We have Deadman, we have the Demon [Etrigan, presumably], we have Swamp Thing, we have Zatanna, we have Constantine, but DC and Warners have been very clear that they are trying to keep those properties separate so when the time comes they can unite them, once they know they’re quantifiable. Batman, Superman, Green Lantern… everyone eventually will come together. Right now, they’re allowing us independence.”

He added that he specifically asked the Constantine brass whether his movie would have to be in the same continuity as the TV show and was told, “‘No, feel free to continue the way you’re going.'” I imagine they were also thinking, “…because there’s a very small chance this movie will ever actually happen. So go wild.”

Elsewhere in the SDCC press gauntlet, del Toro spoke out about FX’s new show The Strain, which is based on a book series written by him and Chuck Hogan. What drew him to the story originally, del Toro explained, is that he was sick and tired of sparklepires mooning around everywhere with their abs:

“[Vampires] were very, very, very good-looking. Six-pack, trim, vampires who wanted to tell you how lonely they were. I never got my rocks off with the vampiric genre. It never peeled my banana. [The vampires in The Strain drink humans and then do] what you would with a Capri Sun or a can of Coke.”

Producer Carlton Cuse added that he was drawn to The Strain because of the way it portrays vampires as “scary, dangerous, parasitic creatures.” That’s definitely true—I felt a little queasy reading the descriptions in the first book, so I’m not sure I’d be up for watching the show. If you watch it, though, and if you get hooked, you can be pleased that they have five seasons planned: One for the first book in the series, and two seasons each for the next two books. If, that is, it doesn’t get cancelled.

(via Blastr, picture by Gage Skidmore)