[UPDATE] Here is the Cover for George R.R. Martin’s Re-release of His Kids’ Book, The Ice Dragon

Game of Thrones without all the killing!

As improbable as it sounds, George R.R. Martin is just about ready to publish his very first children’s book. Not only that, but the book itself takes place in the same universe as A Song of Ice and Fire. Don’t worry, there aren’t any spoilers for those of you that haven’t read the books yet!

The first edition of the book, titled The Ice Dragon, is coming out on October 21, which will feature the gorgeous cover art of Luis Royo. Just look at the detail! According to Tor, all of the art will be done by Royo, but George R.R. Martin’s website seems to counter that by saying Yvonne Gilbert is penciling the interior art. Either way, it looks absolutely fantastic and I can’t wait to see what the full book looks like! This is definitely something I would read my children based on the art alone. 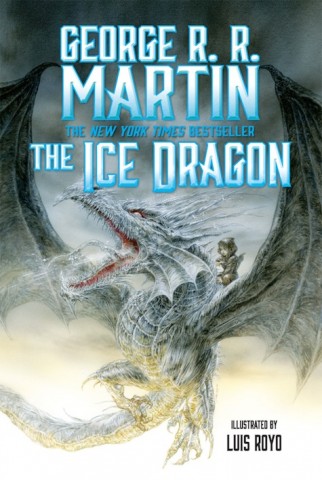 But you’re probably wondering if it really is child-appropriate if it takes place in Westeros. Don’t worry, it appears as though the story itself is posed as a bedtime story that Jon Snow recalls his Old Nan telling to all of the Stark children. It’s got all of the elements of a great children’s story –  courage, love, sacrifice, and of course, dragons.

Adara liked the winter best of all, for when the world grew cold the ice dragon came. The ice dragon was a creature of legend and fear, for no man had ever tamed one. When it flew overhead, it left in its wake desolate cold and frozen land. But Adara was not afraid. For Adara was a winter child, born during the worst freeze that anyone, even the Old Ones, could remember.

Adara could not remember the first time she had seen the ice dragon. It seemed that it had always been in her life, glimpsed from afar as she played in the frigid snow long after the other children had fled the cold. In her fourth year she touched it, and in her fifth year she rode upon its broad, chilled back for the first time. Then, in her seventh year, on a calm summer day, fiery dragons from the North swooped down upon the peaceful farm that was Adara’s home. And only a winter child—and the ice dragon who loved her—could save her world from utter destruction.

Here’s a quick glimpse at some of the interior art from the book. Just as amazing as the front cover! 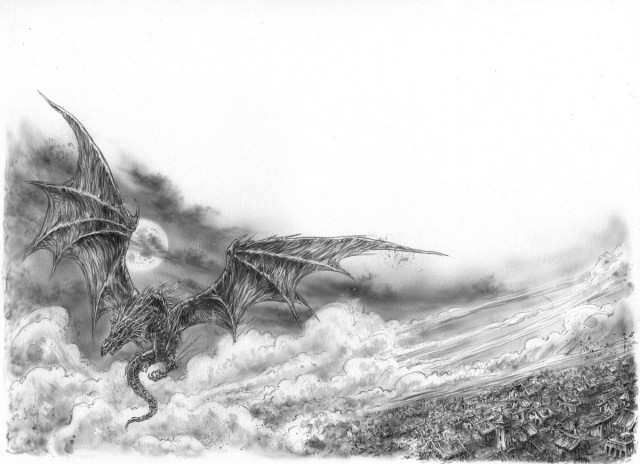 For more drawings of what the inside of the book will look like, check out the Tor article.

[UPDATE] Thanks to a commenter, we now know this is a re-released version of his book, originally published in 1980. This explains the confusion between artists.

A Song of Ice and FireGeorge R.R. MartinThe Ice Dragon