While Grown-ish is a pretty hilarious show, it also promised to tackle some of the issues facing young people today and last night it came through on its promise when it talked about bisexuality.

For those who aren’t watching there is a character on the show, Nomi Segal, who is established to be bisexual from the first episode and to be in casual relationships with women. Awesome.

However, in Episode 4, “Starboy,” while watching a game with her date, Nomi is hit on by a guy. The guy gets flustered and offers to buy a drink for them both to make up for the mistake, but Nomi’s date tells him to just leave.

“I want to say yeah but you’re giving me a real strong no vibe.”

” Look, I don’t want to be some girls experiment, okay?”

This scene was very intense for me because it’s an argument that happens all the time. The treatment of bisexuality as a phase from other people in the LGBTQ community is a thing, but there is also validity in the fear for lesbian women that they are used in some sort of sexual experimentation. It is not an excuse for biphobia, mind you, but there is definitely an issue of some straight women who sleep with lesbians for “fun” as a way to experiment with their sexuality and to see if it is “better” than being with men.

The problem there is that this just sexualizes lesbians, turning them into these orgasm machines that will be there for you emotionally when you have no real intention of committing to anything deeper with them. Which is cruel and mean, especially if you are not upfront about that. Problem is, that sort of sexual experimentation is not the same as being bisexual.

The episode didn’t just stop there, however. Nomi begins to hook up with the guy who offered to buy beers. He is a totally great guy, the twins say he is great boyfriend/husband material. Then the girl Nomi was hooking up with flips them off, and Nomi explains their conversation. That’s when newbae says that he is also bisexual. Everyone freaks out. Nomi’s face totally changes, the twins and Aaron all make shady looks.

It’s an important conversation to have because within the same episode Nomi was screaming about “respecting the B” in LGBTQ, but now that she is confronted with dating a bisexual man she is suddenly shook about what that means. Shows have been slowly having to confront the issue of the double standards facing bisexual men. Insecure did it in the first season when Molly freaked out about her current guy admitted to having experimented with a dude, even though she also experemented with a woman. Jane the Virgin also introduced Adam as a bisexual love interest for Jane, with better effect. Still, men (and especially men of color) don’t get to be sexually fluid without it being a moment to have a PSA. 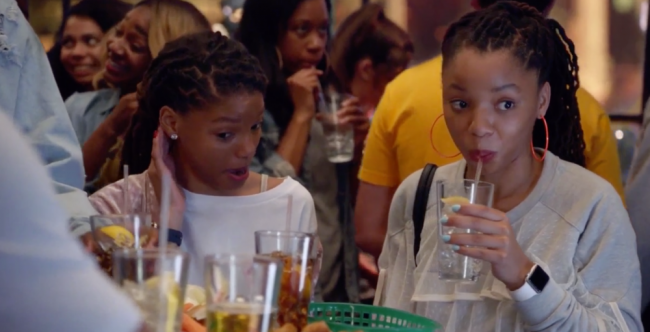 I am hoping Grown-ish delves more into this issue, and it isn’t just thrown out in the next episode. As much as I appreciate bisexual representation of casual relationships, because these are “teens” there is no need for every relationship to be a commitment, it does need to be stated that Nomi’s female love interest, Emily, has not really existed as a character until now, and new bae gets to be husband status just for buying a cheeseburger. This seems like he is going to be part of a larger story, which is fine. I’d just be remiss in my duties if I didn’t point out that we didn’t need an angry lesbian character to start a discussion of biphobia in the LGBTQ community.