The Mary Sue Interview: Greg Weisman on His YA Adventure Kickstarter, Rain of the Ghosts 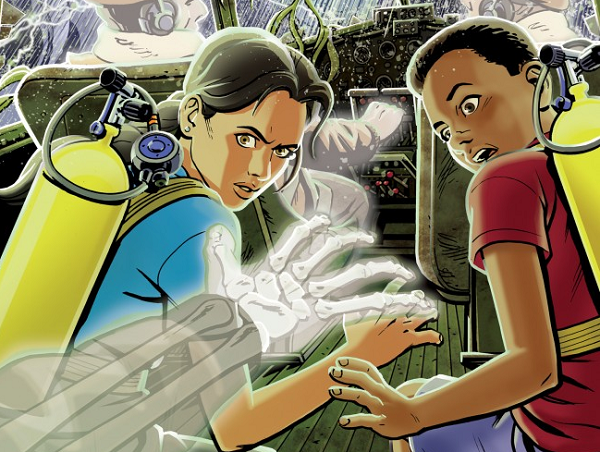 Greg Weisman is probably best known for his television work, producing amazing animated shows like Gargoyles, Spectacular Spider-Man, Young Justice and Star Wars Rebels. I admittedly have a lot of admiration for him, not just because Young Justice is one of my favorite television series of all time but because the last story arc of the Young Justice tie-in comic (written by Weisman and drawn by Christopher Jones) was my first big dip into reading comics beyond the occasional graphic novel.

In the last couple years, Weisman has released two YA adventure/paranormal novels: Rain of the Ghosts and Spirits of Ash and Foam. Both books are about Rain Cacique, a thirteen year old girl living in the Caribbean (on the fictional, appropriately named Prospero Keys) who discovers she has the ability to see and communicate with ghosts. And while Rain dreams about leaving the island for adventure, she soon finds herself on a mission and an ancient quest right in her own backyard. I really enjoyed the first book when I read it recently and you can check out The Mary Sue’s review from last year.

Right now, Weisman is in the process of completing a Rain of the Ghosts audioplay, featuring a wide variety of well-known voice actors, but needs the fans’ help to complete it. We sat down with Greg to talk about the audioplay’s kickstarter campaign, which ends on the 29th.

My first question was simple — of all the ways to expand a novel, why did a multi-actor audioplay appeal to him? “I just wanted to bring them to life for me. And part of it,” Weisman admitted, “is what I’m used to. I’m used to writing scripts and then having these tremendous actors that I know and love bring them to life.” A standard audiobook didn’t appeal to him since the narrator of the novel is an male adult and the protagonist is a teenage girl. “I couldn’t see listening to this adult male do the first person narrator and then every time Rain spoke squeeze his voice to do a little ‘Rain’ voice.”

The alternative for Weisman was to do it like he already knew how — essentially directing and recording the voice work like he would for an animated project … just without the animation.

The cast is made up of 20 actors (most of whom have worked with Weisman on Young Justice, Gargoyles and his other television productions) performing 30 different roles. The Kickstarter page mentions that Rain herself will be played by newcomer Brittany Uomoleale, but Weisman let me in on some of the other casting choices — Bryton James (Static on Young Justice) is playing Rain’s best friend Charlie, Jacob Vargas (Sons of Anarchy and Max Steel) is Rain’s grandfather, Daniela Bobadilla (Anger Management) is the kids’ new friend Miranda and Cowboy Bebop‘s Steve Blum is the mysterious Callahan.

If you’ve been to the project’s page, you might have noticed that Weisman is also on the list of voice actors — that’s because he’s voicing Opie, the narrator. There was the option to bring in another actor for this role, but “No one knows how Opie would respond to everything [like I do],” he said. “There’s a lot of material there, and for someone else to play it just seemed tough.” He added with a laugh, “I hope I’m not the weak link in the project.”

One of the things that makes Rain of the Ghosts special is the Caribbean setting and the many characters of color. The heroine isn’t white and neither are the majority of the people she interacts with in the story. Weisman explained how his inspiration for the plot itself came primarily from real Taino legends:

“The Taino were the indigenous people, the pre-Columbian inhabitants of the Caribbean and they have a mythology which is just as rich as Greek mythology or Norse mythology or Egyptian mythology and yet from a pop culture standpoint, invisible. […] I love myths and legends and I always bring that stuff into my work. Here is an entire mythology and a pantheon that, aside from some scholars, most of the of the human race just didn’t even know about and it’s fantastic!”

Weisman also mentioned how diversity, especially regarding female representation, was always a priority for his writing. “A lot of times the shows I do are supposed to be ‘boy’s adventures’ but I’m not writing for boys, I’m writing for human beings. I want the boys [to watch], but I also want the girls,” he said, which was one of the reasons he wrote Elisa and Angela into Gargoyles and created such a diverse hero team for Young Justice. It’s also why he put so many diverse characters, including a young woman of color as the protagonist, into Rain of the Ghosts.

He went on to talk about the restrictions put on his animated shows as far as queer representation:

“[Diversity’s] always been incredibly important to me, including things that I wasn’t allowed to do, like LGBTQ characters. We had those characters in those shows, but we hadn’t been able to, unfortunately, objectively state who those characters were. We knew who they were in our heads and we tried to write them consistently to that point so that at the very least if someone wanted to see what we were doing, they wouldn’t find anything to contradict that.”

[Editor’s Note: While he didn’t state in our interview which character he was referring to, in the past he has confirmed Lexington in Gargoyles and Beast Boy’s mom in Young Justice as LGBTQ characters (and Weisman has highly hinted at YJ‘s Aqualad not being straight).]

While chatting about his other projects, we also discussed how the meat of his new Star Wars comic, Kanan: The Last Padawan (whose first issue came out earlier this month), came from developing the character’s backstory with the other Star Wars Rebels producers while writing the show. “We came up with backstories for Hera, Sabine, Ezra, Zeb and Kanan and then fell in love with these backstories and realized, ‘We’re not going to be able to show a lot of this on the show,'” Weisman told me. “When I got the nod later of ‘Hey, you wanna do Kanan’s backstory?’ I was like, ‘Yes! Please!’ because we had these great stories that we’d come up with and I had a chance to tell one of them.”

Because I’m a diehard Young Justice fan, I had to ask a YJ question — namely, if he had a chance of continuing the story in animation again or another tie-in comic, what plot threads or characters would he definitely want to focus on first. Of course, he’s known for keeping story ideas close to his chest and told me which stories they’d pick first and foremost depended on the format and how many episodes or issues they would be given.

However, he did talk about Young Justice storylines he and fellow show runner Brandon Vietti had to scrap but always wanted to come back to. Besides the Apocalypse arc which served as the cliffhanger for the series finale, Young Justice plots Weisman never got to included another storyline on Red Tornado (who had a vital role in season one but was only in the background in season two), another chapter in Zatanna and Doctor Fate’s story, and more focus on Artemis and the Arrow family. They even had a Marvel family story and a Green Lantern arc involving young rookies in the Corp that was put away because there simply wasn’t enough time in those two seasons to do it all. “There were a ton of stories,” Weisman told me. “We weren’t close to running out.”

As far as fans waiting for the next book and what’s to come for Rain and her friends: “We’re going to go deeper into [the Taino mythology]. We’re going to learn more about who Julia is, more about who Maq is, more about who Opie is.” Weisman mentioned that the next book, Masque of Bones, will have a focus on the “interpersonal stuff” between many of the main characters. He also hinted that some of the secrets of Rain and her quest can actually be found in Taino mythology — and he wouldn’t mind if that motivated readers to research the Taino culture themselves.

The Rain of the Ghosts kickstarter ends on April 29th. It hasn’t met its necessary goal yet, so definitely consider pledging to it if you’re a fan of Weisman’s work, if you loved Rain of the Ghosts or if you just want to support more diverse young adult fiction.

(image via Christopher Jones for the Kickstarter)

Katie Schenkel (@JustPlainTweets) is a copywriter by day, pop culture writer by night. Her loves include cartoons, superheroes, feminism, and any combination of the three. Besides The Mary Sue, her work can be found on Panels,  Quirk Books, CliqueClack, and her own website Just Plain Something, where she hosts the JPS podcast and her webseries Driving Home the Movie. She’s also a frequent TMS commenter as JustPlainSomething.