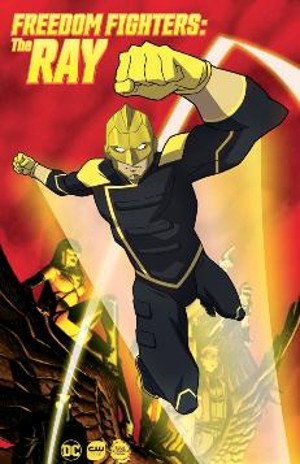 It looks like DC is getting its first animated gay superhero thanks to DCTV powerhouses Greg Berlanti and Marc Guggenheim. Much the way Vixen was given an animated series on the CW Seed to introduce her into the DC television universe before bringing her into live-action, so too will be the case for DC’s The Ray.

As reported by Deadline Hollywood, Berlanti and Guggenheim are writing and producing a digital animated series called Freedom Fighters: The Ray, based on the DC character Raymond “Ray” Terrill who, as described by Deadline:

[W]as a reporter who discovered a group of government scientists working on a secret project to turn light into a weapon of mass destruction. But before he could report on his findings, the project head exposed Ray to a “genetic light bomb.” The bomb failed to kill him and instead gifted Ray with light-based powers. With these abilities, Ray realized he could go beyond reporting on injustice – he could take action to help stop it. Calling himself The Ray, he was recruited by Uncle Sam and the Freedom Fighters to fight violence and oppression wherever it exists.

The character has appeared all over DC Comics, including his own eponymous title, but it was the version in Grant Morrison’s The Multiversity that inspired Berlanti and Guggenheim. Ray appears in the seventh chapter of that series, called “Mastermen,” illustrated by Jim Lee and Scott Williams, which is set on Earth-10 in 1956 and in which the character is gay. All of the Freedom Fighters in that series were written to better reflect the demographics of the U.S., and Berlanti and Co. hope to carry that over into this animated series, as well as later into their live-action shows.

The intention with whomever they cast to voice The Ray is that the same actor will then go on to play the role in the live-action Flarrowverse.

A part of me is thrilled that this is happening, because LGBTQIA representation, yay! Another part of me is a bit disappointed that these stabs at diversity seem to always come so shyly. So as not to make too much fuss. Like, we’ll start with a teensy digital series, and then if no one says anything, we’ll have the character guest star on someone else’s show… It would be really nice if sometime soon The CW decides, just once (and like they have with a female lead in Supergirl), to take a real chance on a character of color, or an LGBTQIA character, or a disabled character and put them front and center on a show from the get-go.

Thank goodness for small favors, I guess. What do you think? Will you be watching Freedom Fighters: The Ray?