Bill discovers that he’s unable to spread his reign of terror outside of Gravity Falls and begins interrogating Ford for a solution to the problem. Meanwhile, Dipper, Wendy, and Soos fight to keep from falling prey to the magical comforts of Mabel’s bubble, and convince her that she needs to wake up and help them save the town.

The meeting point of cute and terrifying has been the show’s bread and butter for 38 episodes. Why shouldn’t it have one last hurrah to celebrate that aesthetic? And to house a cameo from Jon Stewart, because why not (he unmasked himself as a fan way back in 2014, which is sort of cute). The episode takes its time indulging in the lotus-eater fantasy of the first half to better serve the reveal of the second half.

It should feel slow, given that we’re never in doubt that this is a malicious locale, but it ends up placing the tension less on the setting and more where it should be: on Dipper’s fight to reach his sister. In spite of all the bright colors and pop music, there’s not much twisting of a pretty standard setup. The flash and horror isn’t what’s important here (barring a few great moments), and would’ve ended up being distracting. The fantastical serves the mundane, playing into the trip through Mabel’s memories and the interplay of reassurance versus horror that both reality and fantasy contain.

As much as I rolled my eyes at one last resurgence of the Wendy thing, both twins are in great form here. Jason Ritter especially, though he got his share of knocks over the show for not sounding older than any twelve-year-old, hits some high points here in what’s always been a pretty excellent performance.

This is where Dipper and Mabel both come to the culmination of their arcs, leaving the finale to focus on the grand battle and repairing the fractured bond between the older Pines twins, the factor that, in some ways, was at the root of all this (see: the “Bill used Blendin’s body to travel back and break Ford’s perpetual motion machine” theory).

Bill’s part in the episode, oddly enough, ends up the wispier prospect. The discovery of the shield around Gravity Falls is an important plot point and the setup for bringing Ford back, but otherwise it’s setup without payoff, one of the very few points in the mini-movie where the arcs of each sub-episode fail to stand on their own in addition to serving the larger story. It’s hardly a sin, and arguably characteristic of a lot of Bill’s appearances, but that it’s an exception feels worth pointing out, the better to applaud how thoughtfully the movie-episodes were conceived. 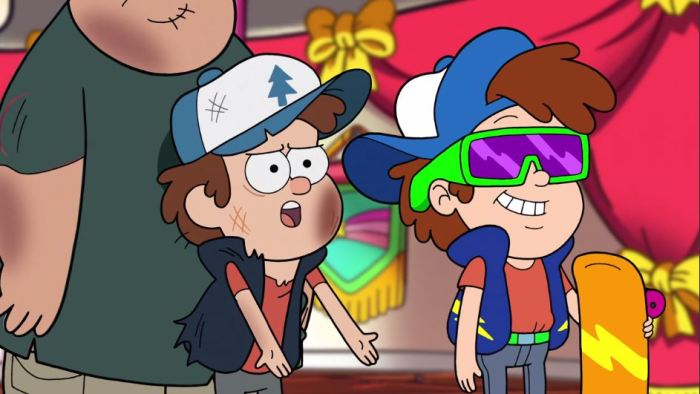 It wouldn’t be Gravity Falls without one last run at jerking the fanbase around, now would it? While there was a practically reasonable airing distance between the first and second parts of the finale (the end of October and the end of November, respectively), the final episode didn’t air until mid-February. Keep that disinterested coin-wringing up until the very end, Disney.

There was a bit of additional content released in preparation: pre-finale special called “Between the Pines” (technically it aired before the last episode, but there’ll be other things to discuss next post), which featured mostly Hirsch talking a bit about behind the scenes processes etc. It’s about what you’d expect from what was probably an hour or so of interview with clips in between. There’s not too much for people who were following the fandom and production news closely, but it served as a nice enough extra for anyone who was a more casual fan.

Disney did pull some shenanigans by pretending there was a “part two” to the special that was meant to be aired after the finale, which caused a great deal of kerfuffle (and Hirsch himself stepped in to say he hadn’t been brought in for any additional interviews). Really, it was just the same material re-aired with a bit of footage from the finale cut in as well. Nobody takes a second (and fourth and fifth and … ) bite at the apple like Disney. 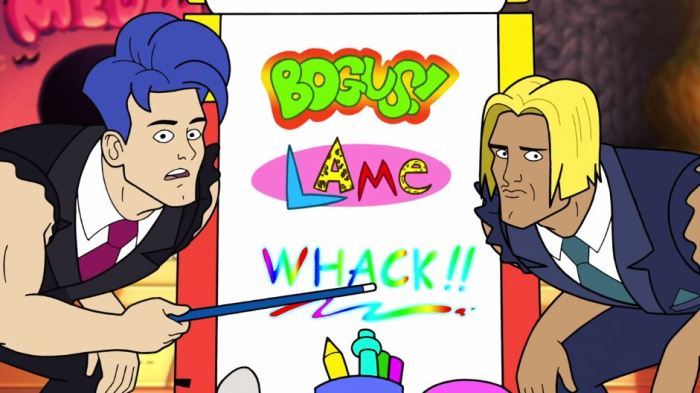 CREDITS CIPHER: Craz And Xyler Went On To Run The Legal Department At A Major Children’s Television Network (KEY: DippyFresh)

PAGE CIPHER: When One Gets Trapped Inside The Past, Dreams Can Turn To Nightmares Fast 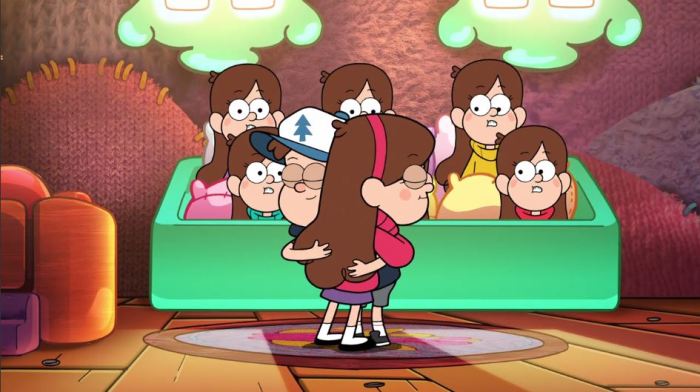 With almost all of the biggest secrets revealed, at least the ones the show planned on revealing at all, there’s not much left for this section. Well, except perhaps for one thing: the scrapbook is some damn fine foreshadowing.

The paralleling of Dipper and Mabel’s relationship with Stan and Ford’s is one of the show’s best throughlines. That was true before Ford’s reveal, with Stan reminiscing about relationships between twins; it was true in the wake of “A Tale of Two Stans,” measuring the ways in which the original Pines broke apart where our protagonists managed to stick together; and now mirroring the ways in which scrapbooks repair the strained bonds between both twins.

Ford and Stan’s argument in the finale is, in some ways, far more childish than Dipper and Mabel’s. While the latter are able to talk somewhat honestly about what really scares them, the former are caught up in posturing, arguing over petty issues that mask the actual problems in their relationship. Those issues are, at their very base level, the same ones Dipper and Mabel are able to talk through: Stan feels left behind and unwanted, afraid of growing old alone; Dipper has to admit that he’d be an idiot to think throwing away his closest emotional bond would be worth following his dreams, particularly dreams he could achieve later and in other ways. And both, even more crucially, can acknowledge why their sibling’s feelings and fears are important to them.

I know I harp on THEY’RE TWELVE frequently, not least because the fandom so frequently forgot it, but … those are some very emotionally developed (and traumatically scarred, no doubt) thirteen year olds.

Vrai is a queer author and pop culture blogger; they’re very busy consuming bad live action dramas like potato chips. You can read more essays and find out about their fiction at Fashionable Tinfoil Accessories, listen to them podcasting on Soundcloud, support their work via Patreon or PayPal, or remind them of the existence of Tweets.