Bill gains physical form and begins to transform Gravity Falls into his own personal playground, terrorizing the townsfolk and transforming Ford into a golden trophy. Left to fend for himself, Dipper dodges the town’s new horrors and finds Wendy; together, they decide to rescue Mabel, converting Gideon to their cause along the way.

It’s clear that the GF crew wanted to send their show off in style, and they started out on the strongest foot they could muster. This episode looks gorgeous, maybe even better than “Not What He Seems,” and packs its content as densely as possible into its running time. Hirsch cowrote this first segment with Weinstein, who is at last able to work his strange one-liners into a smooth harmony (or at least, an unsettling surreal one) with the darker beats.

I decided to watch this in the manner it aired rather than as a solid movie—there would’ve been far too much to put into one post, to start. The story does strive to situate itself in a way that works both as episodic television and a cohesive single story, which is no small feat: each episode has to have a cliffhanger but also a satisfying conflict/resolution in its own right, while also making each individual conflict feel as if it’s cumulating in one big finale that will pay off the showdown with Bill. Making a TV movie is easy to do but very difficult to do well, and the crew rose to the challenge by making sure everyone got their own best moment if they were going to make an appearance (particularly Wendy, who was owed that at the very least).

The horror quotient is upped, too. As if knowing there was no way this could be held over their head after this, the crew threw caution to the wind with everything from background implications (that prison counselor was definitely crushed To The Death by falling debris), to upfront body horror (Preston, Preston, rsPenot), to making sure the stakes are underlined. Death doesn’t feel cheap but it does feel like an omnipresent threat, and the fleshiness of Bill’s 3D design is a thing of subtly squishy beauty (Disney XD made a bumper of his transformation sequence so you could see it during the commercial breaks. Over and over and over….).

Bill himself works out better than I ever could’ve hoped as the ascendant big bad. Trickster archetypes whose main MO is in keeping out of sight can be tough to transition onto the main stage, but Bill’s previous braggadocio clicks perfectly with the revelation that he’s basically an interdimensional frat boy. More exposure doesn’t make him less enthralling, and the episode is careful to continue upping the ante so that we don’t forget that this is also a real, dangerous threat. And did I mention the body horror? I’m just so thrilled, is the thing. A disclaimer: I don’t think this was actually a very widespread thing, in comparison to some of the fandom trends I’ve discussed in writeups past. I had an acre-wide soft spot for it, though, so I’m going to give it a little spotlight.

Looking at the show as it exists, there is no doubt whatsoever that Ford was going to take Bill’s offer, leading to him being killed or captured in order to force Dipper to take action on his own (a very old trope made somewhat odd by the fact that Ford was only The Mentor for about four episodes). The show is so optimistic in tone that it was never going to have Dipper’s idol fall that far, even if previous episodes have pointedly underlined how flawed Ford is. His redemption is less for himself then, because the kids are good and kind, and this isn’t the kind of universe that would take such a recently reclaimed family member from them so soon.

At the same time, as I’ve laid out in previous recaps, Ford is a dick. While the tone of the show might not allow for it, the logic of the character on his own absolutely has the groundwork lain for a fall from grace. His greatest fault was in how easy it was for Bill to influence him, and while he regrets that failure, the faults that caused it haven’t really gone away. In chasing Bill, he’s just come to believe he’s exceptional in a different way. Beyond that one thing, nothing in his life is his fault. He’s the lone hero who can fix everything, he’s the one who deserves to have his life back, he’s obviously the only one who could defeat Bill. The show ultimately has him repair and reforge his relationship with his brother, but for 40 years his life revolved around Bill.

The idea of what that looks like (assuming Bill’s offer was sincerely open in addition to being a means of mockery)—a Ford who decides to play along because he’s SO competent he could trick a chaos god and use any new powers to take Bill down from the inside (only to, once again, wind up corrupted or a pawn); a Ford who decides that the knowledge is worth the gamble, because that might lead to the secret to fixing everything; a Ford who fought a monster so long that he became it. Gravity Falls isn’t that kind of story, but Ford could fit damn well in a show that was.

To at least nod to a thing that WAS popular, this episode aired while Undertale was blowing up in popularity; many, many memes about the success of Dipper’s pacifist run (re: Gideon) ensued.

Unrelated but endlessly delightful, this episode also spawned this video. 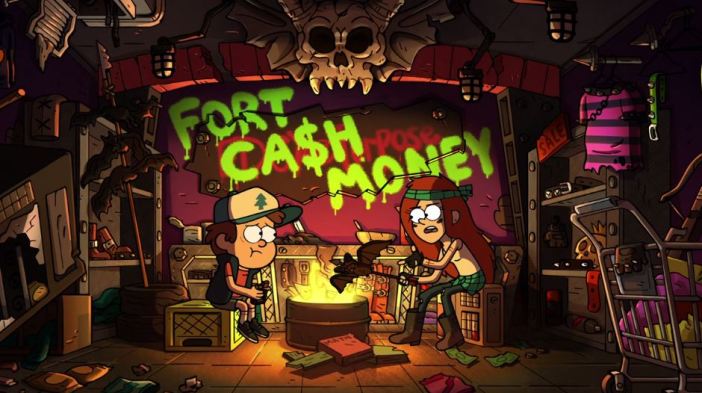 CREDITS CIPHER: It Will Take 1,000 Years For Time Baby’s Molecules To Reconstitute, And When He’s Back, He’s Going To Be Very Cranky (KEYWORD: Bluebook)

PAGE CIPHER: Game is Over, And I Won. Now It’s Time To Start The Fun. I Always Love Corrupting Lives. Now Let’s See Which Pines Survives.

The coopted opening theme also means a new backward phrase over the opening credits. The traditional “three letters back,” etc. has been replaced with “I’M WATCHING YOU, NERDS.”

On the subject of Bill, he also had a song for this episode, but it wound up on the cutting room floor. You can still listen to a demo, though (with rad fan animatic included).

Oh, and also the title of this episode was originally put out as a cipher, causing much temporary wailing and gnashing of teeth on the part of the TV Guide people (this didn’t last; it’s just listed as “Weirdmageddon” on the digital releases). 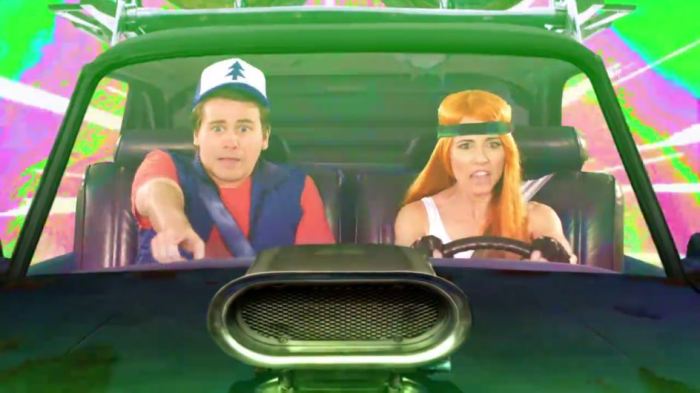 According to Journal 3, Ford’s superweapon was originally put together when Ford visited a dimension that was almost perfectly parallel to his own (not long after he visited the Flatland homage), except that in that one, Stan took Journal 1 and left rather than fighting with Ford. Apparently, that was the magic ticket, because parallel Ford and Fiddleford were able to make up, find a way to defeat Bill, and create a better future where they’re both wildly successful.

No doubt that fueled Ford’s self-comforting delusions that Stan was responsible for everything that went wrong in Ford’s life, because it’s easier to pinpoint one incident rather than examining a full life of a turbulent, complicated relationship with failings on both sides. That doesn’t fit well into Ford’s hero narrative. Unfortunately, he couldn’t stay in the magical perfect dimension, since meeting his double would cause both to vanish. But that’s where the weapon came from and, as we discussed, Ford was about to use it the first time when Stan reactivated the portal.

The destabilizer is the first of several magical plot tokens in this finale arc, isn’t it. Of course it doesn’t work—nay, it can’t work. A miraculous last minute plot coupon engineered to kill the bad guy has “this will bomb” written all over it. It doesn’t reflect how Dipper and Mabel have grown at all, and it’s an individual rather than group creation (going against the show’s emphasis on family and community). More than that, part of undoing Ford’s damaging ideas of what heroism is—a Special Destined Person of Destiny (who’s unappreciated but much better than those jerks anyway)—involves having those deus ex machina moments fail. Younger generation must rise to the occasion and act without their mentor’s guidance, etc. etc. Ford’s lucky he made it out of that one alive.

Vrai is a queer author and pop culture blogger; they still love that evil dorito. You can read more essays and find out about their fiction at Fashionable Tinfoil Accessories, listen to them podcasting on Soundcloud, support their work via Patreon or PayPal, or remind them of the existence of Tweets.