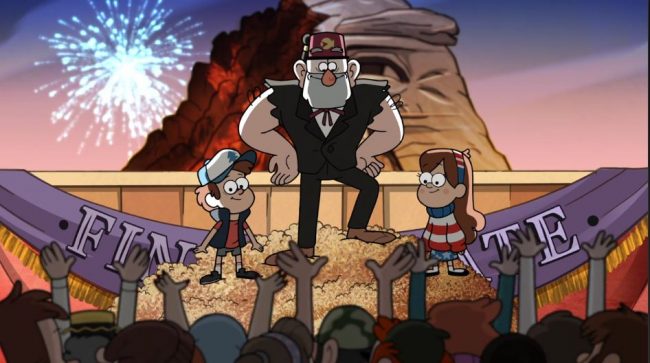 Feeling unappreciated and worthless next to his super-genius twin, Stan decides to run for mayor. The twins decide to help him, but the only way to make Stan an appealing candidate is to use a mind-control tie. The stakes get higher when the twins discover that Gideon is controlling his father, planning to use the election to get out of prison.

Revisiting this episode is nearly as tragic as it is painful. While it’s not in the show’s overall top tier, it was perfectly serviceable at weaving Gideon back into the plot and giving Stan a chance to reforge his bond with the kids and play action hero. It also aired in 2015, which means it was written as long as a year before that. There is no way the writing staff could have predicted that America (and Putin) would elect a screaming fascist candy corn as its President. Likely they still had things like hope and a belief in American voters’ basic capacity for empathy. They were wrong, but it’s not their fault.

It does not make this episode any easier to sit through. It’s not that the bare bones of the episode are bad. Of course Stan is going to feel replaced by his always-more-lauded brother and want to take his place back. Of course, being the grandstanding con that he is, he’d do something over the top. And the sash that Mabel knits at the end of the episode, along with the reaffirming of Stan’s bond with the kids, gets me every time. On paper, it all makes sense. But…

The retroactive realworld subtext about winning popularity by smoothing over unpleasant or dangerous opinions with Murrica-related buzzwords–which was always true of American politics, but at the time hadn’t had such dire consequences–is hard to see played harmlessly. It’s even worse given the fact that it’s Stan who has been given the role of “uncouth politician who speaks his mind.” I don’t want to have to think about Stan and Trump in even theoretical similarity. Stan’s a basically good person and I like him (there was, around the time of this episode, an incredibly sweet tweet from Hirsch stating that Stan would be up in arms about anti-immigration and deportation platforms because of Soos–yet another of those cases of “Hirsch usually deleted Q&A tweets the day after a session, I’m sorry, please trust me”).

There’s also the fact that this is partially a Josh Weinstein episode, and it’s the most overtly Simpsons-esque. It wouldn’t take that much tweaking for this to be the kind of story that would work with Homer, and it follows that “golden age” formula of two heavily joke-laden acts and an emotional wrap-up. That formula is at the heart of the best Simpsons episodes out there. But the fact that The Simpsons resets every episode while Gravity Falls doesn’t… it always makes episodes like this that do something big but then never really come back to it feel a little odd.

So, yes. That’s an unpleasant taste hanging over the whole episode, to the point that the stuff with Gideon can’t quite dig its way out from under that pall. Not even the hilarious moment that I have to assume came from an S&P script note, where Gideon ties the twins up next to a bunch of fireworks and tells them they’ll be trapped inside the mountain once the explosion goes off. That… that is not what’s going to happen to those small meat bodies sitting right next to boxes and boxes of explosives. 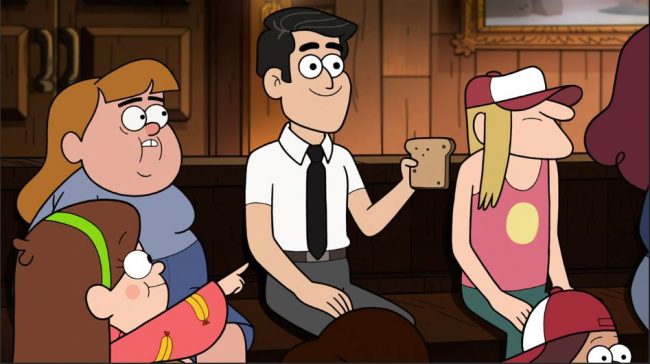 Settle in, internet, and let me tell you the Ballad of Tad Strange. Long before this episode actually aired, Night Vale star Cecil Baldwin put his work on the series onto his resume, which it took the fanbase about .02 seconds to sniff out. There were a lot of NDAs about working on the show for exactly that reason, so I suspect there might’ve been some feathers ruffled there.

Having the name and nothing else, the GF fandom did what the GF fandom always does. A name like “Tad Strange” is evocative in the same way as “Bill Cipher,” and we’re getting toward the end of the series, right? So, what if Tad’s also a demon? Like, Bill’s opposite number? Suppose he’s purple, because Night Vale, and… what’s different than a triangle… a square? Oh, and a bowler hat instead of a top hat. Just for fun. Bam, fan character, less than a day.

It got weird, as the fandom was also wont to do, when Hirsch came out and said “no, this character isn’t a demon,” at which point the conspiracies began. Is Alex trying to convince people so that it will preserve the twist? Is he saving face? Clearly he doesn’t mean it when he says “no really, that’s not what this is.” In fact, that character was so popular it stuck around in AU form long after this episode aired, though the theories that there was actually some DEEP, HORRIFIC SECRET behind Tad’s normalcy mostly faded away… mostly. 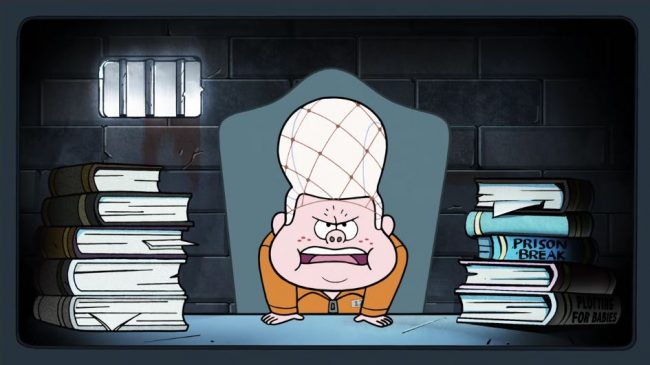 PAGE CIPHER: Be Wary Of Whom You Belittle, Big Problems Can Start Out Widdle

This isn’t quite a code, but there was a meta gag with this episode–the official Twitter handle @StanPines4Mayor. 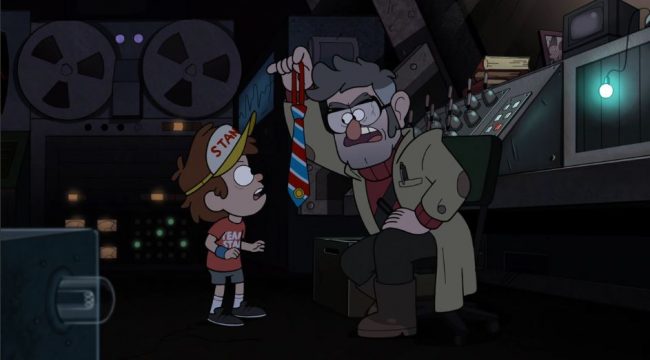 Watching the episodes as they aired, it felt a bit like Bill’s return was teased only to be pretty well dropped until the reveal leading into the finale. But on rewatch, it’s quite the effective slow burn. Bill coming back explains why Gideon doesn’t make trouble again until the finale, since he’s now a pawn himself; it explains why Ford wasn’t having dreams about Bill prior to that point, since Bill’s powers are probably stronger once he’s able to work through a mortal agent; and every episode except for “Roadside Attraction” adds at least some covert hint as to what Bill’s been up to before he sets his plan into action.

Also, this episode fed the theories that Ford and Fiddleford’s project was government funded as a possible explanation for where they were getting all that material for the portal. It’s clear in hindsight that they mostly raided the UFO for parts, but I can’t imagine that lasted forever. There’s gotta be at least a few cases of the pot calling the kettle black, I’m saying. No way Ford doesn’t have at least a few thefts under his belt justified as being FOR SCIENCE.