And a million Hamilton jokes were retroactively willed into being. 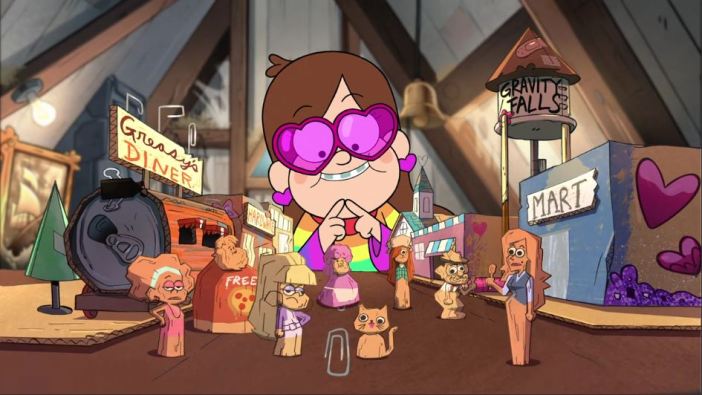 Mabel tries to help Robbie get over being dumped by stealing a potion from the Love God and setting him up with Tambry, which implodes the apparently fragile group dynamic among Wendy’s friends. Meanwhile, Stan tries to find a way to make money off of the encroaching Woodstick Festival.

I am prepared to call for the banning of love potions as a device for shenanigans. They’re still great fodder for horror stories, mind, but there are too many nasty underlying real world similarities about using drugs to force someone to become compliant toward your advances (not to mention that the chosen partner’s individual autonomy doesn’t matter so long as you get to make out with their meat hull) to make it an easy go-to for comedic stories.

And yet, somewhat disappointingly, this is the first Gravity Falls writing credit from legendary golden age Simpsons showrunner Josh Weinstein. It’s not a total wash – the two scenes that actually let Mabel and Robbie talk, clearly the seed of the episode, are a nicely sincere counterpart to Dipper’s frantic attempts to fit in with Wendy’s other friends (I don’t like what this implies about his future high school years, frankly); all of the scenes with Stan’s disastrous balloon are likewise pretty golden, with the ultimately produced monstrous warping of hasty craftsmanship a thing of beauty. But the A-plot is a dud, and Journal 3’s hasty addition that the potion itself only lasts for 3 hours if the feelings between the couple aren’t genuine can’t dispel the underlying creepiness (or quite overcome the fact that Wendy’s friends mostly all have one personality trait to their names, since we haven’t really seen much of them post-“The Inconveniencing”).

As a showcase for Mabel, like other lowpoint “Soos and the Real Girl,” it doesn’t really say much about the character that isn’t explored better in another episode: in the case of “Mabel’s well-intentioned exuberance hurting the people around her” we have “Sock Opera,” while “a Pines twin becomes friends with their sibling’s former rival” was executed with greater clarity and emotional truth in “Northwest Mansion Mystery.”

And yes, of course Mabel is selfish. So is Dipper. They’re twelve, knock it off. The key to Mabel’s particular brand of flaw is that she’s so focused on others while also believing she knows exactly what they need (a counterpart to Dipper’s tendency to posture as the smartest guy in the room). She’s very smart, but she’s also more willing to trust her optimism and other people than her brother, and this won’t be the last time when trying to avoid the pain of growing up (the flip side to her understanding that it’s good to savor childhood while you have it) gets her in trouble again. But there’s one thing you can always say for Mabel – once she realizes other people have been affected by her actions, she’s always ready to own her mistake and work to fix it. 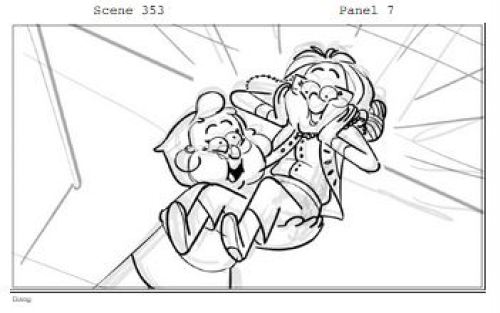 Dear Disney, I bet you thought I forgot about this. You were gravely mistaken. The original boards for this episode at least attempted to be less rampantly heteronormative, including a pair of cute old ladies getting matched by the Love God during the diner scene (whose necklace in the initial boards is the transgender equality symbol rather than the linked male and female symbols – kudos to Sabrina Cotugno for boarding all this and making the attempt).

I bring this up because it’s such a small thing. While it’s not as monumental as the kind of active, frontline diversity that would be ideal, these little forward steps in the background help normalize identities other than white heterosexuality (which the final scene still tries for in its small way with the adorable old interracial couple). They not only create a world that’s more true to life, but they also push an audience that’s presumed to be straight and white to empathize with experiences outside of their own. That kind of background normalizing helps re-level the playing field.

If your ENTIRE fictional world is made up of the group with the most social power, of course they’ll unconsciously think that that’s natural and that people not included there are aberrant or shoehorned in – even if that fictional world doesn’t reflect the real world at all, just their little bubble. I’m preaching to the choir, I’m certain, but it’s disheartening to see a company as influential as Disney scared to death of even that littlest bit of what’s a normal part of life to so many kids (and before people even start – believe me, as a kid I zeroed in immediately and identified with any kind of queer coding long before I had openly queer characters to point to, no insidious media “turning” involved).

Also the episode after this aired featuring taxidermied animal heads bleeding from their mouths and eyes as they chant ominously about the impending murder of two children. Just. Putting that out there. 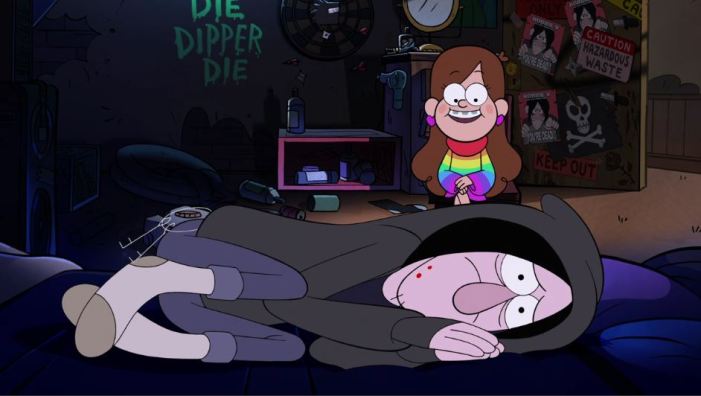 PAGE CIPHER: At The Play Or At The Fair, I Always See Them Standing There. Dressed In Black They’re On My Lawn, But When I Turn My Head They’re Gone

While we talked about the continued background presence of Agents Powers and Trigger way back in “Scary-oke,” this is the first time the show makes an active nudge to get you to pay attention (the better to pay off that plot thread in a couple episodes). It also warrants a reference in the Journal, meaning that at this point the characters themselves (or at least Dipper and probably Stan) are starting to catch on to what’s up.

There’s still no clear answer as to whether it’s an accidental continuity error regarding “kid Robbie” in “Blendin’s Game” vs the school photos we see in this one, or if it’s handwaved off as another mystery or time travel ripple effect… thing. 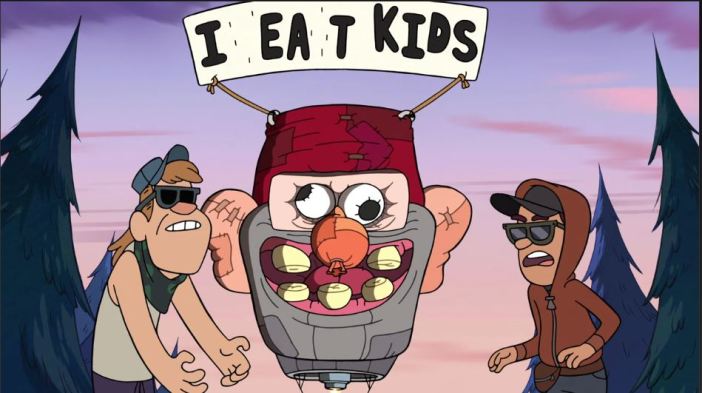 Another light one, since other than the brief coded mention of the agents and Stan’s still-bandaged hand, there’s not a whole lot of overarching details of the mystery going on in this one. It IS always slightly depressing to be reminded of how artistically talented Stan is and how simultaneously underappreciated he is for it – that hot air balloon comes together over the course of maybe a day, and it’s clearer than ever in this episode that he puts together all the Shack’s displays himself.

Stan’s a really fantastic out of the box thinker and artist like Mabel (while artistic talent seems to run in the family, both Ford and Dipper trend toward realistic styles when drawing in the journal), and while he’s definitely put those skills to use over the years, he didn’t grow up in an environment where his father or society at large would encourage them (his mom seems like a peach, though).

Vrai Kaiser is a queer author and pop culture blogger; they’re entering post-SUBomb hibernation right about now. You can read more essays and find out about their fiction at Fashionable Tinfoil Accessories, listen to them podcasting on Soundcloud, support their work via Patreon or PayPal, or remind them of the existence of Tweets.