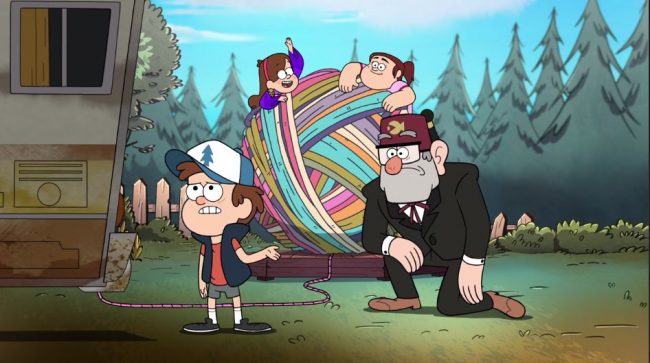 Stan takes the kids on a roadtrip to sabotage other tourist traps around Oregon, and Dipper tries to get over Wendy by following Stan’s advice. That proves to be a terrible idea, as Stan is captured by a literal man-eater and Dipper manages to alienate all of the girls he knows.

Go on, let it out. That same long, death rattle sigh that Soos and Mabel helpfully vocalize for us at the start of the episode. It’s the last hurrah of that damn crush. But actually? I don’t have a problem with it in this context. The season one crush episodes were always much more about Dipper than about Wendy, and this episode is upfront about that.

It’s worth dealing with the concept that even if you’ve done the right thing and accepted that someone doesn’t like you back, there’s still going to be a period where you still carry those feelings that really, really sucks. Stories about “moving on” almost always deal with rushing to the next crush object, so the fact that that’s a disastrous idea here is pretty clever. Once again, the show’s on its most solid ground when dealing with topics related to toxic masculinity.

While I’ve always felt this episode to be somewhat out of step with the rest of the series (see the bottom section), there is a lot to like here. It’s one of the best spotlights for how Stan’s learning to grow as a caregiver and let go of the more harmful ideas passed down by his own dad and absorbed from his era. And while I can still hear the howls of “Dipper did nothing wrong!” from certain corners of the internet, it’s also pretty effective in executing its message.

Dipper flirting with strangers is pretty harmless on the surface–flirting can be fun, and lots of people enjoy doing it with no strings attached. But the broader context involves using others as tools and objects. While Dipper is instinctively uncomfortable, Stan urges him to rack up numbers and emails like points. It’s a mindset that treats human beings and their feelings as less important than your own ego. That doesn’t do much harm when you’re twelve, but it’s an early step to thinking of others (here, women) as lesser. What does it matter how they felt, if YOU know you were only doing it to feel good about yourself?

Having Candy develop a crush feels natural within the story (in fact, this whole episode has the goofy friend dynamic between the girls down well) while also driving the point home a little further: it’s a lot harder to enact this behavior on someone you actually know, like, and think of as a fellow human being. And just to make really sure you get it, the episode has Darlene (who’s kind of delightful, actually; A+ body horror), a literal predator making very efficient use of what’s ultimately predatory behavior. The episode has to be a little bit contrived to have everything come crashing down on Dipper within one trip rather than over years and years of toxic behavior, but the logic behind the emotional arc is sound. 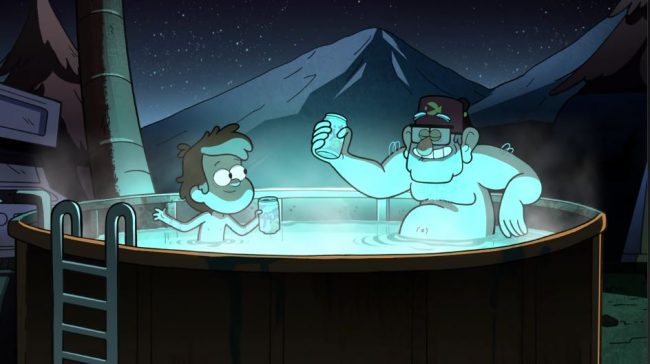 I’ve mentioned time and again that Disney was just about the worst as far as scheduling and distributing news about this show. In fact, since we’re on the topic again, let me touch on a few season two things that weren’t big enough to warrant their own segment: A clip of “Dungeons, Dungeons, and Dungeons” was leaked prior to the release of “A Tale of Two Stans” by Disney UK, causing a whole flurry of panicked lockdowns (incompetent spoiler releases – not just for Cartoon Network anymore!); the Tumblr TheMysteryofGravityFalls (which is still keeping on, on other platforms), which was one of the fandom’s go-to sources for codes, screencaps, and scheduling info (basically most of the things an official Tumblr would do, but run by a fan) was shut down by someone as Disney for reasons that I’m still not sure anyone knows – Hirsch himself even took the time to say he didn’t have any idea why it’d happened.

And finally, the ending … not quite panic. A surprise, maybe? For a good chunk of season 2’s running time it was assumed that the show would be three seasons, or two seasons and a movie, which were estimates Hirsch had loosely tossed around previously. That ended up being KIND of true, since the final three episodes of the series form an hour-plus continuous story arc, but it wasn’t what the fandom was mentally prepared for. So when the end of the series was announced with less than half a dozen episodes left to air, just … imagine that one Community pizza GIF. 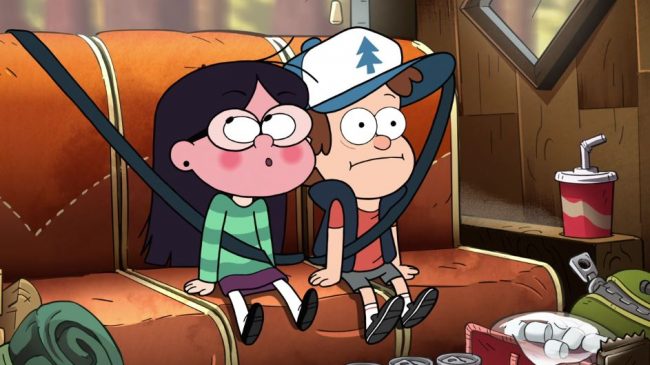 CREDITS CIPHER: Soos, Like A Noble Golden Retriever, Eventually Found His Way Homeward, And Befriended A Talking Bulldog And Sassy Cat Along The Way (KEY: Dopper)

PAGE CIPHER: Carla McCorkle Returned All His Flowers, Marilyn Divorced Him After Only Six Hours, Beatrice Slapped Him For Being A Cad, Old Goldie’s The Best Girlfriend Stan Ever Had

In one of those strange moments of creator lore, “Marilyn” is apparently the name of Alex’s grandmother (you can also see a cameo of him in the background of this episode; frankly, I’m surprised it took this long). 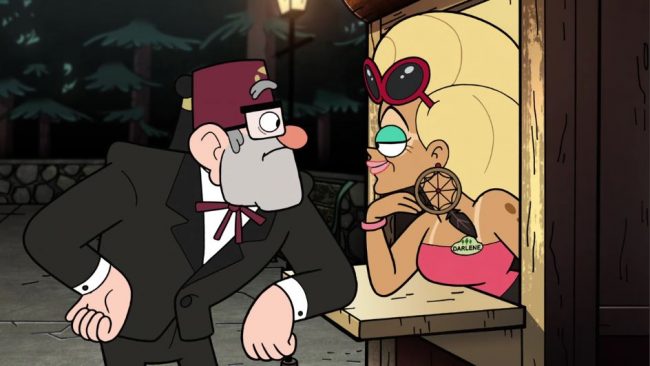 It’s some strange kind of telling that there’s nothing related to this episode in Journal 3–not even a guest entry, which up to now has usually appeared in at least some minor form. Which makes sense. This is, after all, the only episode that actually leaves Gravity Falls. And in spite of all the good stuff I just talked about, that decision makes this whole episode feel out of place.

Ford’s research goes on extensively about how weird things are drawn to the town, and that’s really hammered home when Bill’s reign of terror is locked within the city limits. To have a road trip that goes all over Oregon and still features weird monsters isn’t impossible (looking at Ford’s map, there are obviously incidents in other places), but it breaks that feeling of confinement, the one thing that makes Gravity Falls feel uniquely terrifying and uniquely wonderful as a place to explore. It might have sat better had it occurred earlier or in a more plot-relevant sense, but it’s a broadening of the world’s parameters in a mostly episodic road trip episode, making the move feel less like a purposeful decision and more like a matter of convenience.

Vrai is a queer author and pop culture blogger; they’re still in 70s manga hell. You can read more essays and find out about their fiction at Fashionable Tinfoil Accessories, listen to them podcasting on Soundcloud, support their work via Patreon or PayPal, or remind them of the existence of Tweets.